Granddaddy of All Desert Races-Milestones-SCORE Baja 1000

ENSENADA, Baja California, Mexico—Known worldwide as the ‘Granddaddy of All Desert Races’, the SCORE Baja 1000 is at the pinnacle of motorsports as the most iconic, oldest, prestigious, toughest and longest continuously held desert race in the world.
Online racer entry applications are available for November’s iconic internationally-televised season-ending BFGoodrich Tires 53rd SCORE Baja 1000, presented by 4 Wheel Parts, the final round of the pandemic-abbreviated two-race 2020 SCORE World Desert Championship.
Starting and finishing under strict BioSecurity health and safety protocols in Ensenada, Baja California, Mexico, race-week activities and the race itself will be held Nov. 17-22.
ONLINE RACER ENTRY APPLICATIONS
Racer entry applications are now available at www.SCORE-International.com under Race Info on the SCORE Baja 1000 page. Questions should be directed to SCORE Registration and Membership Director Audreonna Garcia at 775. 852.8907 or via email at registration@score-international.com. Online racer entry applications will be accepted through Friday, Nov. 6.
53rd SCORE BAJA 1000
Many of the world’s best desert racers will be in action at this year’s massive BFGoodrich Tires 53rd SCORE Baja 1000, presented by 4 Wheel Parts. The race will be televised on a delayed basis as a one-hour special on ABC TV’s World of X Games programming.
Ensenada, “The Off-Road Capital of the World” is a coastal city on the Bahia de Todos Santos area of the Pacific Ocean, 80 miles south of the U.S. border at San Diego.
Over 200 vehicles are expected at the start line with racers from nearly 30 U.S. States and as many as 10 countries anticipated. Long-time SCORE sponsor and race title sponsor BFGoodrich Tires has also posted a US$25,000 contingency bonus for the overall 4-wheel winner to help commemorate the renewal of this legendary SCORE race.
This year’s SCORE Baja 1000 will be a loop race of a spectacular 934.47 miles in the northern state of Mexico’s majestic Baja California peninsula.
Here is a quick look at some of the many milestones in the history of the Granddaddy of All Desert Races…
1962 – In March Dave Ekins and Bill Roberston Jr. ride The 1000 Miles of Baja for the first run ever.

1966 – In May Dave & Bud Ekins, with Eddie Mulder and Cliff Coleman Ride Again to finish the 1000
Miles of Baja and complete the First Non-Assisted Ride.

1975 – Malcolm Smith becomes the first to win both an overall 4-wheel and 2-wheel titles win he wins
the 4-Wheel with Dr. Bud Feldkamp in a Funco-VW. They won again in 4-wheel in 1977

1990 – Bob Gordon wins the overall 4-wheel with his daughter Robyn and son Robby, marking the
first time for both a father/daughter and father/son overall win and Robyn is first female overall winner

2004 – Larry Roeseler becomes only the second person in race history to win the overall on both 2-wheel and 4-wheel, earning the 4-wheel title with Troy Herbst.

2008 – Johnny Campbell, riding with Robby Bell and Kendall Norman wins his record-setting 11th overall motorcycle title
– Roger Norman wins the overall 4-wheel with Larry Roeseler. Roeseler has a record 13 overall wins in this race, 10 in 2-wheel and three in 4-wheel. Roeseler is the only racer to win this race overall in a truck, car and a motorcycle

2017 – Carlos ‘Apdaly’ Lopez and his father Juan C. Lopez team to capture the Overall at the 50th Anniversary of the Granddaddy of All Desert Races, the second team of Mexican nationals to win the Overall title at this epic event 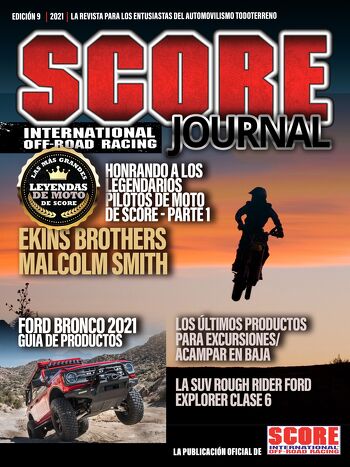