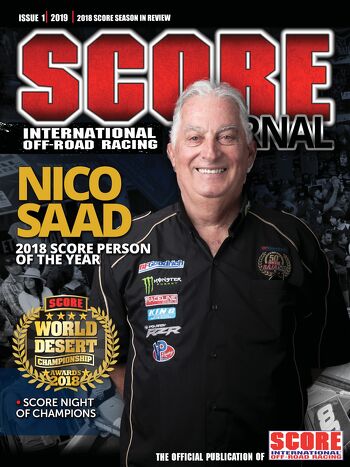 In addition to the in-depth review section of both the 2018 SCORE Award Night and each event in the four-race 2018 SCORE World Desert Championship along several colorful features and interviews, several SCORE News items, lots of new products and a very special feature on Nico Saad, the 2018 SCORE Person of the Year.

“The SCORE racing community experienced an extremely memorable 2018 SCORE World Desert Championship and this issue once again clearly reflects this fact while depicting the most memorable moments of it,” commented Jim Ryan, SCORE Marketing and Sales Director and publisher of the SCORE Journal. “This January issue of the SCORE Journal features an in-depth look at the entire 2018 SCORE World Desert Championship, race-by-race and an overview.”

“We also salute with a very special feature Mexico’s grand tourism advocate Nico Saad of Ensenada as the 2018 SCORE Person of the Year.”

“We also have a colorful recap of the 2018 SCORE Awards Night celebration attended by nearly 600 racers, crews, sponsors, VIP and media at the San Diego Air & Space Museum.”

Highlight of the edition is a large spread from the 2018 SCORE Awards Night, where nearly 600 racers, crews, sponsors, VIPs and media celebrated for the second straight year on Jan. 12 at the iconic San Diego Air & Space Museum.

The photo and video-laden issue highlights the winning efforts of many, many racers topped by the stories on the championship efforts of Wayne Matlock, Rob MacCachren and the father/son team of Todd Winslow/Matt Winslow.

There is also a wonderful story on Dan Chamlee, who won the Class 7 season point championship in his special Ford Ranger. It was his 14th SCORE season class point title and 13th straight.

There is also photo package of all 32 SCORE Pro and Sportsman season point champions from the 2018 SCORE World Desert Championship.

SCORE races in 2018 have been airing on the El Rey Network domestically and around the globe on ESPN International and syndication. The SCORE Baja 1000 will air as a two-hour special for race coverage and is scheduled to air first on February 24 of this year.