ENSENADA, Mexico — Looking to meet the need of the ever-increasing Hispanic audience for the SCORE World Desert Championship, this month’s Volume 2, No. 12 of the acclaimed SCORE Journal, the colorful monthly on-line digital magazine of SCORE International is now live in Spanish as well as English on the SCORE website at www.SCORE-International.com and is available through SCORE social media channels as well as a direct link at SCORE-Journal-Spanish-Aqui.

“The SCORE Journal is a major element helping SCORE International continue to expand the exposure for the SCORE International brand to manufacturers, potential sponsors, future racers and enthusiasts around the world,” commented Jim Ryan, SCORE Director of Marketing and Sales. “This month’s final issue for 2016 takes a colorful microscopic view of the 49th annual SCORE Baja 1000, the iconic flagship event of the SCORE World Desert Championship.”

“December’s SCORE Journal expands its race coverage with an in-depth interview with Off-Road Hall of Famer Rob MacCachren and his amazing 3-peat victory at this year’s SCORE Baja 1000. We also shine the spotlight on a crucial part of all SCORE Baja race efforts as we feature the chase team support area and the all-important planning it takes to assemble the parts and logistics. The up-close feature reviews experiences from first time teams to multi-time race overall winners.” 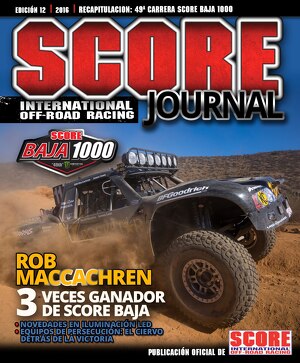 Vol. 2, No. 12 of the SCORE Journal is again filled with several interesting must-read features and news items.

Leading the way, of course, is expanded coverage of the 49th SCORE Baja 1000.

Additional key features are a look at the Team Valvoline/Cummins making its debut at the 49th SCORE Baja 1000.

A spotlight feature shines on how SCORE Baja racing has helped LED lighting technology develop to the level it has to date.

And the issue again includes the Off-Road Marketplace showcasing the latest products for racers and enthusiasts.

The SCORE Journal, which launched in 2015, is published as 12 monthly online digital magazines, which includes five print editions that are available as the SCORE race programs at the four events that comprise the SCORE World Desert Championship and another print edition for the annual SCORE Awards Night.

For more information regarding SCORE, visit the official website of the SCORE World Desert Championship at www.SCORE-International.com