‘Echoes from the Past’ provide prolific, poignant, precise
notable notes, super stats for one of World’s Top 10 races

Round 2 of four-race 2021 SCORE World Desert Championship
in Ensenada, Baja California, Mexico; Airing on ESPN2 World of X Games;
#scorebaja500; More race info at www.score-international.com
NOTE: At bottom of text–entry list in numerical order, by class, in class start order
ENSENADA, Baja California, Mexico—History is the foundation for the present, the present is structure for the future and echoes from the past resonate resoundingly as racers from around the globe are anxiously awaiting next month’s memorable internationally-televised BFGoodrich Tires 53rd SCORE Baja 500, presented by 4 Wheel Parts.
Round 2 of the four-race 2021 SCORE World Desert Championship will be held June 10-13 in Ensenada, Baja California, Mexico.
CLOSED START/FINISH
Because of the significant health and safety protocols developed by SCORE in conjunction with and the approval of Baja California state and local health authorities as a result of the COVID-19 pandemic, all race-week festivities and the start/finish line compound will be restricted access only and closed to the general public. The SCORE race start/finish compound will be located Northeast of downtown Ensenada, one-mile east of the end of the extension of Avenida Ruiz.
Use the following link for the map to the SCORE start/finish compound:
https://score-international.com/raceinfo/map-to-compound/.
Spectators, adhering to the health and safety protocols, will be allowed to watch the race from around the race course.
SHOWTIME
Most the world’s best desert racers will be in action at this year’s celebration of one of the top 10 motorsports events in the entire world.
With nearly 250 entries expected from 30 U.S. States and 15 countries, 51 competition classes are offered for cars, trucks, UTVs, motorcycles and quads. Prior to late, on-site registration, the current total of 217 entries include racers from 22 U.S. States, host country Mexico, along with Bolivia, Canada, France and Peru.
An elapsed-time race with staggered starts, the green flag on Saturday (June 12) will drop first for the motorcycles and quads at 6 a.m. (PT) and 10 a.m. (PT) for the cars, trucks and UTVs. While the fastest vehicles will complete the rugged 466-mile course in around 8 and one-half hours, all vehicles will have a 20-hour time limit to become an official finisher.
All four 2021 SCORE races are being held on Mexico’s magnificent Baja California peninsula for the sixth consecutive year. SCORE is in its 48th year as the World’s Foremost Desert Racing Organization.
LIVE STREAMING
With no spectators allowed in the start/finish line area because of Biosecurity Health Protocols, contingency (June 11) and during the race on Saturday, June 12 until the course closes on Sunday morning, June 13, there will be extensive live streaming from the start/finish line compound broadcasting race activities and start and finish line interviews.
Popular Rat Sult is in his sixth year as primary host of the SCORE live streaming which will also air on the new SCORE TV app. 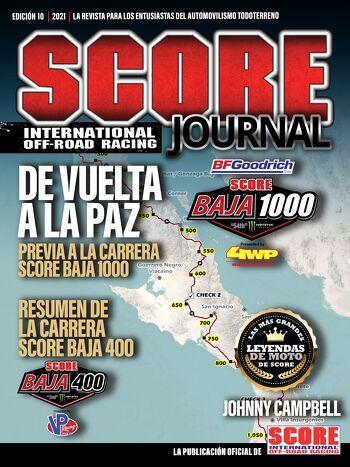