ENSENADA, Baja California, Mexico —November’s 51st SCORE Baja 1000 is bathed in the spotlight with a preview of November’s Granddaddy of All Desert Races this month in Vol. 4, No. 10 of the highly-acclaimed SCORE Journal digital online magazine.

In addition to the in depth preview story on this year’s iconic race, there is also a colorful review of September’s Lucerna Hotels & Resorts Tijuana 22nd SCORE Desert Challenge, another on a look back at Jeep vehicles in SCORE racing, a color-perfect look at Joe Bacal’s new Axalta SCORE Trophy Truck as well as several SCORE News items and another unique industry update.

“The SCORE racing community is experiencing an extremely memorable 2018 SCORE World Desert Championship and this issue once again clearly reflects this fact,” commented Jim Ryan, SCORE Marketing and Sales Director and publisher of the SCORE Journal. “This October issue of the SCORE Journal features an in-depth preview of November’s SCORE Baja 1000 in both pictures and words as the world’s best desert race starts its sixth decade.”

“We also have a feature piece on the legendary Jeep vehicles that have such massive roots in SCORE desert racing, a story on the development of drive trains and a very colorful look at Joe Bacal’s sparkling new Axalta SCORE Trophy Truck.” 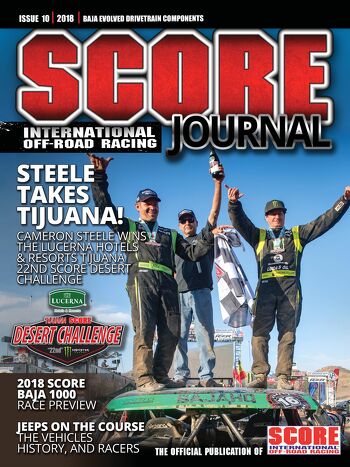 Vol. 4, No. 10 of the SCORE Journal is once again filled with numerous interesting worth-reading features, stories, exciting videos and several news items.

This edition is anchored around a detailed preview of the upcoming 51st anniversary of the iconic SCORE Baja 1000, the season-finale of the four-race 2018 SCORE World Desert Championship.

The Off-Road Marketplace in this issue continues to shine brightly on the latest off-road products for 2018 for racers and enthusiasts.