RENO, Nev., USA — Shining a superlative spotlight on the recent 48th annual SCORE Baja 500 that was Round 2 of the four-race 2016 SCORE World Desert Championship, Volume 2, No. 6 of the SCORE Journal, the colorful monthly on-line digital magazine of SCORE International is now live on the SCORE website at www.SCORE-International.com and is available through SCORE social media channels as well as a direct link at http://scorejournal.digital 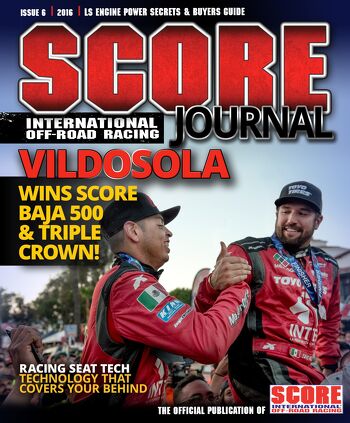 The SCORE Journal digital magazine, reaching over 2 million unique viewers with the May issue with an average engagement time of 41 minutes, is a major element in the continuing media expansion that SCORE has implemented. The revamped SCORE website also generates over 2.5 million monthly unique viewers and delivered an amazing 3.6 million unique viewers and over 18 million page views during the four-day window of the recent SCORE Baja 500 (June 2-5).
AND NOW…
“This issue of the SCORE Journal provides extensive coverage of the 48th SCORE Baja 500 in a feature section that includes a up-close and personal one-on-one with race winner, Gus Vildosola Jr, who joined other SCORE legends as the only members of the SCORE Baja Triple Crown club with with his elusive SCORE Baja 500 win,” said Jim Ryan, SCORE Director of Marketing and Sales. “Issue No. 6 of 2016 also has a spotlight look at SCORE Trophy Truck championship driver B.J. Baldwin and his new relationship with TRD (Toyota Racing Development) and his new No. 97 Toyota Tundra.”

Vol. 2, No. 6 of the SCORE Journal is again filled with several interesting must-read features and news items including SCORE’s new partnership with 4Wheel Parts, multiple video links, including a colorful review of the recent 48th annual SCORE Baja 500. There is also a special one-on-one interview with SCORE CEO/President Roger Norman for insight on SCORE’s new media and marketing opportunities designed for racers and sponsors.
SCORE News includes several items including Vildsola Jr winning his second King Shock Zone award of the season and the all-important SCORE/Stand 21 Safety Foundation Workshop on July 30.
The off-road marketplace is a staple of the SCORE Journal and the sixth issue of 2016 includes an LS Engine Product guide and a LS power basics written by one of the leading authors in LS engine theory and testing, Richard Holdener. Racing seat technology is also reviewed addressing how improved the added safety and comfort benefits continue to be developed for the off-road community along with the discovering story of the humble compact Datsun 510 car that racer/author Peter Brock made racing history in many years ago.

CBS SPORTS NETWORK COVERAGE
All races in the four-race 2016 SCORE World Desert Championship, along with the special SEMA SCORE Baja 1000 Experience and qualifying for the SCORE Baja 1000 from Las Vegas Motor Speedway are once again airing in the USA and Canada on the CBS Sports Network. The spectacular shows feature not only SCORE Trophy Truck coverage, but also top action and highlights from many other classes of trucks, cars, UTVs, motorcycles and quads – making sure that the most exciting footage and most compelling stories continue are part of each race event broadcast.
Capping off the 2016 broadcast season, the SCORE Baja 1000 broadcast on CBS Sports Network will air as a full two-hour special for the second straight year. The SCORE Baja 500 will also be televised for the first time as a two-hour television special.

CBS Sports Network is available across the country through local cable, video and telco providers and via satellite on DirecTV Channel 221 and Dish Network Channel 158. For more information, including a full programming schedule and how to get CBS Sports Network, go to www.cbssportsnetwork.com.
WORLD OF SCORE
This new series delivers a unique inside look into what racing in SCORE is all about! Think of it as
bringing the SCORE Racer Briefing to life! These videos, including archive footage and new interviews with current racers, will inform, educate AND entertain across every topic that is important and instrumental to the SCORE racing world.
Video topics will include: insurance and accidents, transponders and spot trackers, tracking and chasing, traveling in Baja, contingency, video, photos and social media, tech inspection, pre-running, aircraft and aerial operations, race fuel, race day/start line primer, radio operations, course markings/speedzones/checkpoints, racing and passing, the chase team, and many, many more.
SCORE ALL OUT!
This new series is all about Action, Action, Action! Each episode will feature the ultimate in high octane highlights from SCORE race action, past and present. Tapping into the vast SCORE archive, as well as current television footage, SCORE All Out is the No. 1 source for the best in SCORE racing short-form action video highlights. Great editing, high energy soundtracks, cool interviews – this will be the highlight series that will make all the other (pirated) stuff online look like junk. The focus will always be on generating exciting and driving racer registration – so we’ll work to do that through timing and scheduling, including:
Thirty (30) days prior to each SCORE race, all SCORE All Out! videos will be focused on footage from that race. Thirty (30) days after each SCORE race, all SCORE All Out! videos will be focused on celebrating the victories and highlights of the previous SCORE race, as well as giving people a tasty preview of the upcoming CBS Sports Network show.
DUST2GLORY
From award-winning documentary filmmaker Dana Brown, Dust2Glory will chronicle each of the four races in the 2016 SCORE World Desert Championship. Now, D2G, which began shooting at last year’s SCORE Baja 1000, continued at this year’s SCORE San Felipe 250 and the SCORE Baja 500, will be up close and personal in capturing the robust racers in their amazing adventures in Mexico’s majestic Baja California peninsula through all four spectacular 2016 races.