THIS YOU DON’T WANNA MISS! 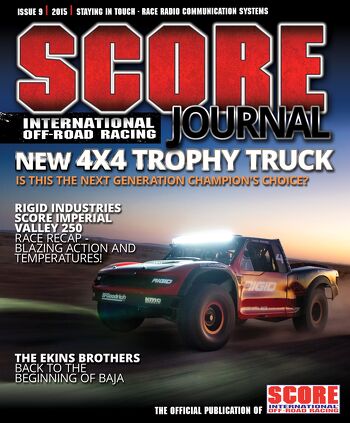 RENO, Nev., USA — Setting new viewing records with each issue with unique viewers from virtually all over the world, Issue No. 9 of the SCORE Journal, the dynamic monthly on-line digital magazine of SCORE International and the five-race SCORE World Desert Championship, is now live on the SCORE website at www.SCORE-International.com and is available through SCORE social media channels as well as a direct link at http://scorejournal.digital.
The digital magazine, which saw the audited total of unique viewers for SCORE Journal No. 8 pass 1.7 million in unique viewers, is a major element in the media expansion that SCORE has implemented for 2015 which includes its most aggressive national and international television packages, four new online video series, each with 26 episodes and a new consumer based SCORE website. The revamped SCORE website has reached 2.5 million monthly unique viewers.
HERE WE GO
“We are diligently preparing for the season-ending legendary 48th annual Bud Light SCORE Baja 1000, and our pre race-week activities in Las Vegas”, commented Jim Ryan, SCORE Sales and Marketing Director. “Next week is our massive SEMA SCORE Baja 1000 Experience, presented by BFGoodrich Tires, at the Las Vegas Convention Center (Nov. 3-6) and the SCORE Baja 1000 Qualifying for SCORE Trophy Truck and the unlimited Class 1 at Las Vegas Motor Speedway (Nov. 3).”
“Our SCORE Journal continues to surpass all unique viewership records with each issue as an integral element in all of our marketing strategies and the current issue has a great cross section of the entire SCORE International universe.”