RENO, Nev., USA — Climbing to heights far greater than anticipated for a start-up publication, 2015 ends with issue No. 11 of the SCORE Journal, the colorful monthly on-line digital magazine of SCORE International and the five-race SCORE World Desert Championship. Issue No. 11 is now live on the SCORE website at www.SCORE-International.com and is available through SCORE social media channels as well as a direct link at http://scorejournal.digital.
The digital magazine, which saw the audited total of unique viewers for SCORE Journal No.10 reach nearly two million in unique viewers, is a major element in the media expansion that SCORE implemented in 2015 as a major component of its most aggressive national and international television packages, four new online video series, with 26 episodes each and a new consumer based SCORE website. The revamped SCORE website has reached 2.5 million monthly unique viewers.
BEYOND BELIEF

“As our reach continues to skyrocket globally, SCORE Journal completes its first year as the digital magazine of the SCORE World Desert Championship,” said Jim Ryan, SCORE Director of Marketing and Sales. “Our unique viewer count is now close to 2 million per issue with an average visit of nearly 54 minutes.
“Our SCORE Journal has mushroomed even further as an integral element in all of our marketing strategies and the current issue has another beautiful cross section of the entire SCORE International universe. The year of 2015 was another memorable one for SCORE and SCORE Journal No. 11 does a dynamic job capturing the beauty and essence of what the SCORE World Desert Championship is all about as well as presenting our amazing racers up close and personal.” 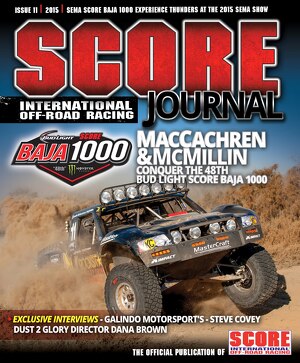