ENSENADA, Baja California, Mexico — Showcasing a preview of the 2018 SCORE World Desert Championship along with a sneak-peek at racers to watch this season, Vol. 4, No. 2 of the acclaimed SCORE Journal digital magazine is now online.

This issue also includes words, pictures and videos looking at the four-race 2018 SCORE World Desert Championship in Mexico’s majestic Baja California peninsula. There are also feature stories on current and past SCORE racing stars and teams.

“Every issue of the SCORE Journal seems to be better than the previous month and this February issue is no exception,” commented Jim Ryan, SCORE Marketing and Sales Director and publisher of the SCORE Journal. “This issue includes a quick look at the entire 2018 SCORE World Desert Championship,  an extensive look at some of the top racers who will be competing for 2018 race wins and class championships. This month we also present the very latest in safety products for our sport and the industry.” 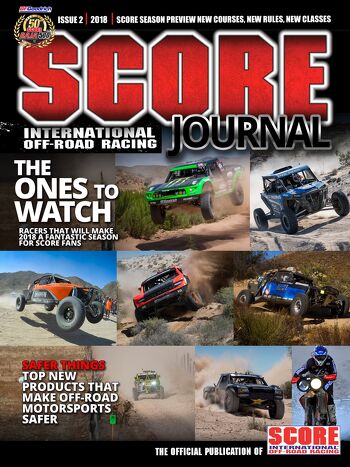 Vol. 4, No. 2 of the SCORE Journal is once again filled with numerous interesting worth-reading features, stories, exciting videos and several news items.

This edition includes separate pictorial and textual previews on each of the four races in the 2018 SCORE World Desert Championship.

This issue also has individual features on racers like the youthful Cody Reid who will be debuting his new Alumi Craft race car in Class 10 in 2018.

Starting with this issue, the SCORE Journal begins shining a very bright spotlight monthly on this year’s 50th anniversary BFGoodrich Tires SCORE Baja 500 to be held May 30-June 3 in Ensenada, Mexico. The SCORE Baja 500 was the first race produced by SCORE in Baja California, Mexico on July 26, 1974.

The spotlight feature looking at the golden anniversary of the SCORE Baja 500 in this issue is a detailed interview piece with four-time SCORE Baja 500 race winner Robby Bell.

The Off-Road Marketplace in this issues shines brightly on the latest off-road products for 2018 for racers and enthusiasts. This month’s issue specifically reviews numerous top new products that will make desert racing even safer.

There is also an extensive feature in words and photos on the exciting new Polaris RZR RS1 single-seat UTV.

Under the supervision and direction of SCORE CEO/President Roger Norman, SCORE Race Director Jose A. Grijalva and SCORE Tech Director Dan Cornwell with editing and updating by SCORE Ops personnel Lawton Shank and Christine Wait, the 2018 SCORE Rule Book is currently in final review along with the 2018 Rule Book Addendum. All relevant items, including the three new classes being offered,  will be available in the near future on the SCORE website under the race info page.

For more information regarding SCORE, visit the official website of the SCORE World Desert Championship at www.SCOREInternational.com