at the iconic SCORE Baja 1000 by Rob MacCachren

ENSENADA, Baja California, Mexico — With just four months remaining before the historic 50thanniversary race of the iconic SCORE Baja 1000, legendary racer Rob MacCachren, preparing to attempt to win this race for the fourth consecutive year, reflects rigorously with candid comments as he recalls his experiences in this month’s Vol. 3, No. 7 of the acclaimed SCORE Journal.

Several spotlight features shine brightly in the current issue but none brighter than MacCachren as he digs deep to share his ‘addiction’ to the incomparable SCORE Baja 1000. There are also in-depth features on Cognito Motorsports’ Justin Lambert, and his dominating Pro UTV victory in this year’s SCORE Baja 500 plus the continuing development of the No. 10 Team Papas & Beer SCORE Trophy Truck with lead driver Aaron Ampudia. Besides the MacCachren feature, there is also a special story on John Hodel as he prepares to ride solo in honor of his brother and all military veterans and the “StandforVets.org” program as part of the continuing community service lifestyle of the SCORE racers.

“What better way to continue saluting the road to celebration of the 50th golden anniversary of the iconic SCORE Baja 1000 with the insightful Rob MacCachren feature in this month’s SCORE Journal,” commented Jim Ryan, SCORE Marketing and Sales Director and publisher of the SCORE Journal. “Our seventh digital issue of 2017 also includes a sobering somber undercurrent as we remember long-time SCORE family members Art ‘The Tech Dude’ Savedra and Bob ‘Weatherman’ Steinberger who both passed away recently.”

Vol. 3, No. 7 of the SCORE Journal is once again filled with numerous interesting worth-reading stories and news items.

SCORE News includes a feature on the four new Off-Road Motorsports Hall of Fame Inductees as well as a report on the more than $40,000 raised by the Caselli Foundation.

In addition to the Rob MacCachren view of the legendary SCORE Baja 1000, another story is on John Hodel who will be attempting to ride the 50th anniversary race solo on a motorcycle in memory of his brother, who died in the Vietnam War, and for all military veterans. 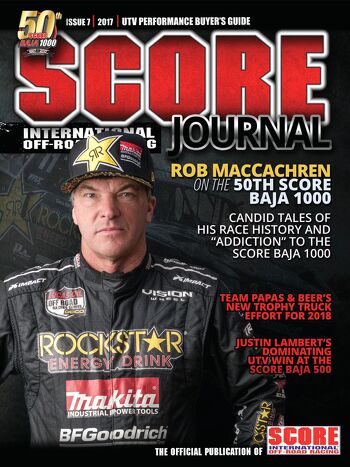 Another personality spotlight shines on Justin Lambert who breaks new barriers as he discusses the faster speeds in Pro UTV racing and his huge Pro UTV overall and Pro UTV FI win at this year’s SCORE Baja 500.

This issue also digs into the story on Can-Am increasing horsepower and performance in its 2018 model UTV lineup.

The SCORE Journal this month also talks ‘dirt’ with the three Ampudia brothers, Aaron, Alan and Rodrigo, whose family owns the Papas & Beer restaurants and clubs in Mexico, and their new SCORE Trophy Truck.

There are also pieces on bolt-on performance part for UTVs along with SCORE Journal’s continued look into new safety products, that for this month, is focusing on improved fire suppression system products and technology.

Showcasing the overall and SCORE Trophy Truck victory by Andy McMillin, the one-hour in-depth coverage show on the 49th SCORE Baja 500 will premier on Sunday, August 2 at 2 p.m. Pacific Time on the El Rey Network.