This issue also includes several special feature stories saluting the 50th BFGoodrich Tires SCORE Baja 500 as well as SCORE News and another unique industry update. At the top of the list is the microscopic look at the dominating performance of Off-Road Motorsports Hall of Famer Rob MacCachren as he led the race from start to finish against a world-class field of challengers. 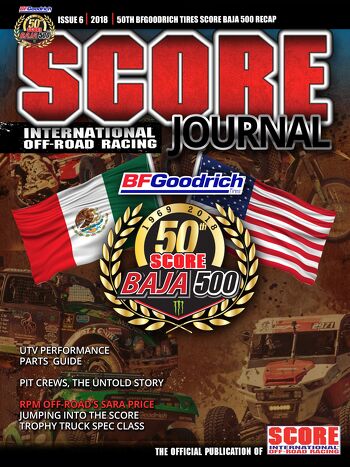 “The SCORE racing community, the off-road industry and our global fan base has celebrated yet another historic landmark event with the recent 50th running of the SCORE Baja 500,” commented Jim Ryan, SCORE Marketing and Sales Director and publisher of the SCORE Journal. “The June issue of the SCORE Journal takes an unbelievable look at the SCORE Baja 500 in an inspiring and colorful race review section along with some product presentations, special features and interviews along with a huge amount of dynamic photographs, text and videos.”

“This is one of those unique and lasting issues that deserves a close look by everyone who enjoys SCORE Baja racing as much as we do at SCORE International.”

Vol. 4, No. 6 of the SCORE Journal is once again filled with numerous interesting worth-reading features, stories, exciting videos and several news items.

This edition is centered around an extensive review of the 50th BFGoodrich Tires SCORE Baja 500 and the 321 official entries who challenged the rugged race-record 542.12-mile course.

While the 50 years of Glory tribute to the 50th anniversary of the SCORE Baja 500 includes several features and award-winning photography, the anchor story is about the amazing Rob MacCachren as he earned his SCORE-record 17th career SCORE Trophy Truck race win and captured the overall title of the 50th BFGoodrich Tires SCORE Baja 500, picking up the massive $25,000 contingency bonus from title sponsor BFGoodrich Tires while impressively leading the grueling historic race from start to finish.

With coverage from many angles textually and pictorially, one of the other key breakout stories is on the magnificent McMillin family that had three third-generation SCORE Baja racers finish second, fourth and fifth overall and in SCORE Trophy Truck. Leading this ‘Dynasty in the Desert’ in this event, Luke McMillin, 25, the youngest of the trio, was second, his cousin Andy McMillin, 31, finished fourth and his older brother Dan McMillin, 25, finished fifth overall and in SCORE Trophy Truck adding more to the legend of McMillin family racing in SCORE Baja races.

Another breakout piece reviews the brilliant motorcycle race by Justin Morgan/Mark Samuels/Justin Jones as they dominated the two-wheel classes in winning the overall m/c title and recording the seventh-fastest time on the record-breaking course.

In additional to breakouts on several other classes and several repeat winners in Pro Moto classes, there is also a feature on the largest field of UTV racers in SCORE history, the first overall UTV win in a SCORE race by a woman-Kristen Matlock, and a look at motocross champion Sara Price in her SCORE rookie season racing in Trophy Truck Spec in an RPM Racing truck.

Also spotlighted in the issue is a very, very look at the Pit Crews, those ‘heros’ behind the teams who wait for hours to keep their vehicles racing for victory.

In the SCORE News section is the official announcement that several 4Wheel Parts Stores will be selling SCORE 50th anniversary apparel.

The Off-Road Marketplace in this issue continues to shine brightly on the latest off-road products for 2018 for racers and enthusiasts. Featured this month is the 2018 SCORE UTV Performance Parts Guide that increases UTV performance for the serious enthusiast.