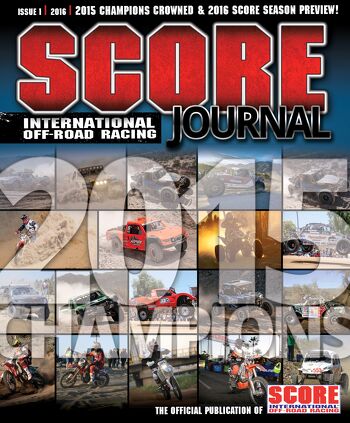 RENO, Nev., USA — Following an over-the-top inaugural year which saw over two million unique viewers for its year-end issue, 2016 begins with Volume 2, No. 1 of the SCORE Journal, the colorful monthly on-line digital magazine of SCORE International and the five-race SCORE World Desert Championship. Issue No. 1 is now live on the SCORE website at www.SCORE-International.com and is available through SCORE social media channels as well as a direct link at http://scorejournal.digital.
The digital magazine, which saw the audited total of unique viewers for SCORE Journal Volume 1, No.11 reach over two million in unique viewers, is a major element in the media expansion that SCORE continues to develop and launch. The revamped SCORE website has reached 2.5 million monthly unique viewers.

ASTONISHING
“As SCORE International’s exposure continues to explode through our TV, Video, SCORE Journal Digital Magazine, Web Site and Social Media programs, we are now adding another exposure platform through Carbon Television.,” said Jim Ryan, SCORE Director of Marketing and Sales. “This new addition will now allow the racers and global fan base a 24-hour a day opportunity to enjoy their favorite SCORE International broadcasts and videos.”
“This will be yet another tool to showcase to the general public, motorsports enthusiasts and extreme sports followers the experiences of world class athletes and their teams from SCORE International with what they do on a regular basis. And year two of the SCORE Journal will enhance the exposure process even more as the SCORE World Desert Championship begins another exciting season.”

INSIDE VOL. 2, NO. 1
Vol. 2, No. 1 of the SCORE Journal is again filled with several interesting features, multiple video links, includes a historical review of the first 29 years of the SCORE San Felipe 250 which turns 30 in February, a special interview with Carlos ‘Apdaly’ Lopez, the 2015 SCORE Overall and SCORE Trophy Truck season point champion, a review of the 2015 SCORE World Desert Championship along with coverage of the 2015 SCORE Awards Night, preview of the 2016 SCORE World Desert Championship, SCORE news flashes and the off-road marketplace.
The first issue of 2016 also includes an inside look at Ray Fields’ Dougan’s Racing Engines, winner of the 2015 SCORE Engine Builder of the Year Award and an up close story on the sturdy Ford Broncos and their impact on the SCORE culture.
This issue also takes an editorial and photographic look at the Proctor Racing Group’s (OEM) turbo-charged Honda Ridgeline that won its class at last year’s SCORE Baja 1000.
SCORE JOURNAL
The SCORE Journal, which launched in 2015, is published as 11 monthly online digital magazines, which includes five print editions that are available as the SCORE race programs at the five events that comprise the SCORE World Desert Championship.
The SCORE Journal Monthly Digital Magazine features exclusive editorial, enhanced race action videos, expanded and interactive race coverage, interactive product reviews, insider interviews with drivers, tech stories, driver and team profiles, race narratives and analysis, exclusive long and short form video programming, race results, updated stats, studio photography, class overviews, unmatched access to SCORE’s historical archives and much, much more.

SCORE OFF-ROAD RACING NETWORK—CARBONTV.COM
Continuing to expand the scope, reach and exposure value of its brand, races and racers, SCORE also recently entered into an agreement with Carbon Media Group to launch the new SCORE International Off-Road Racing Network on CarbonTV. Content to be included on the premier online video destination include all telecasts of the five-race SCORE World Desert Championship as well as all of SCORE’s online web series available 24/7 and at no cost. It can be accessed at www.carbontv.com/networks/score-international.