ENSENADA, Baja California, Mexico —One is a jovial, ever-smiling middle-aged Texas businessman, the other a cordial, chiseled, youthful rally racer from Mexico City. Together Mark Winkelman and Santiago Creel are making waves in the 2018 SCORE World Desert Championship and they along with their ‘Monkey Business Racing’ team are spotlighted this month in Vol. 4, No. 9 of the acclaimed SCORE Journal digital online magazine.

In addition to the in depth story on the principals of Monkey Business Racing, this issue also includes several additional feature stories including a special review and update on SCORE race safety initiatives and another colorful story on the legendary Mike’s Sky Rancho as well as several SCORE News items and another unique industry update. 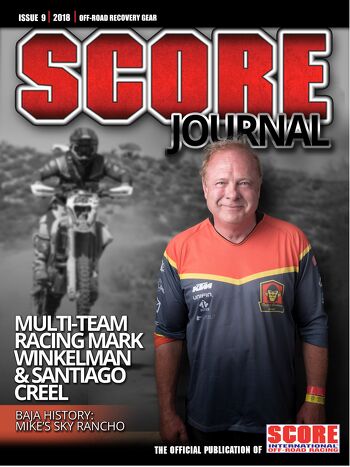 “The SCORE racing community is experiencing an extremely memorable 2018 SCORE World Desert Championship and this issue once again clearly reflects that fact,” commented Jim Ryan, SCORE Marketing and Sales Director and publisher of the SCORE Journal. “This September issue of the SCORE Journal introduces to the world Mark Winkelman and Santiago Creel and their very special ‘Monkey Business Racing Team’ in both pictures and words.”

“There is also a very informative story updating all of the safety initiatives that have been implemented by SCORE sincere Roger and Elise Norman bought the organization prior to the start of the 2013 season. Much of the information and quotes came from the Stand 21 SCORE Safety Seminar held on July 28 in Mission Beach, Calif.”

“We also have a feature piece on the legendary Mike’s Sky Rancho by photo journalist Matt Kartozian. Among the other items attracting attention are our stories on the Saleen Sporttruck XR and Textron’s new Wildcat XX LTD UTV along with our special SCORE Recovery Gear Guide.”

Vol. 4, No. 9 of the SCORE Journal is once again filled with numerous interesting worth-reading features, stories, exciting videos and several news items.

This edition is anchored around a detailed look at the expanded Monkey Business Racing team put together by SCORE class champion racers Mark Winkelman and Santiago Creel.

In the SCORE News section, the major story is a look at the history of the expanding Lucerna Hotels and Resorts of Mexico, the first Official Hotel in the history of SCORE. There is also an announcement regarding the massive SCORE Baja 1000 exhibit at this weekend’s Lucas Oil Off-Road Expo at the Fairplex in Pomona, Calif.

The Off-Road Marketplace in this issue continues to shine brightly on the latest off-road products for 2018 for racers and enthusiasts. Featured this month is our SCORE Recovery Gear Guide.