ENSENADA, Baja California, Mexico— While 2020 is a year that will be either forgotten totally or remembered with much disdain, the pandemic-abbreviated two-race 2020 SCORE World Desert Championship produced many lasting memories and shining moments that are clearly a testimony to the resilience, dedication, determination and intestinal fortitude of people everywhere. They all add to the growing legacy of SCORE International, which completed its 47th year as the World’s Foremost Racing Organization in 2020.
We continue to learn many things from the negative aspects of the pandemic and the 2020 SCORE racing season will remain a tribute to the cooperative effort to work within the BioSecurity protocols demanded by the horrible virus and still afford the continuing opportunity for the extremely positive benefits of organization, teamwork, competition, creativity and camaraderie that are key elements of motorsports, albeit life, worldwide.

SCORE BAJA 1000 ON ESPN2
Television coverage of the pandemic-shortened two-race 2020 SCORE World Desert Championship concludes on ESPN2 tomorrow (Sunday, Jan. 3) with the premier of multiple airings of the BFGoodrich Tires 53rd SCORE Baja 1000, presented by 4 Wheel Parts.
The one-hour special show featuring the Granddaddy of all Desert Races will be broadcast on the World of X Games show on ESPN2. It is scheduled to air at 11 p.m. ET (8 p.m. PT), but check local listings to confirm the time in your area. 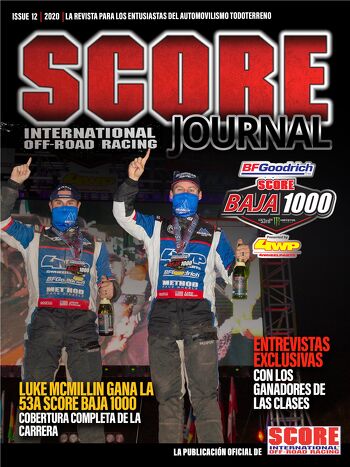