WHY 'TALK DIRT' WITH AARON AMPUDIA?

So ‘Why TALK DIRT with AARON AMPUDIA?’ This alone is reason enough. But there’s much more to this story . . . 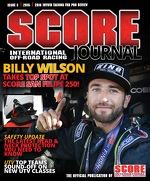 Here's The Rest of the Story - A No-Brainer

Fact is, Ampudia, who like many up-and-coming young champions in SCORE, has deep family roots in the world's most competitive desert racing championship series. So, when over the past three seasons Ampudia started turning heads with a bevy of 1/2 1600 podium finishes, race championships and then the 2015 Overall Championship for the Class, it wasn't like desert racers and race fans were hearing the name 'Ampudia' for the first time.

Still one thing was clear to most everyone. Aaron Ampudia was carving a name for himself within the Ampudia family desert racing legacy.

The kid was going places.

As the 2016 SCORE World Championship Desert Racing season rolled around, Aaron Ampudia decided to make a big jump. Ampudia spent the off season preparing for the change, and when Ampudia rolled up to the starting line at the 30th Annual SCORE SAN FELIPE 250, SCORE's defending 1/2 1600 Class Champion was behind the wheel in a Class 8 truck, his brother, Alan, strapped in beside him.

It was a different look, for sure, for Aaron. Not to mention a brand new challenge. But in so many ways, it wasn't that different at all. The entire Ampudia clan - as always - was in Baja with Aaron and Alan, come what may.

Talk about your editorial no-brainers . . . right?