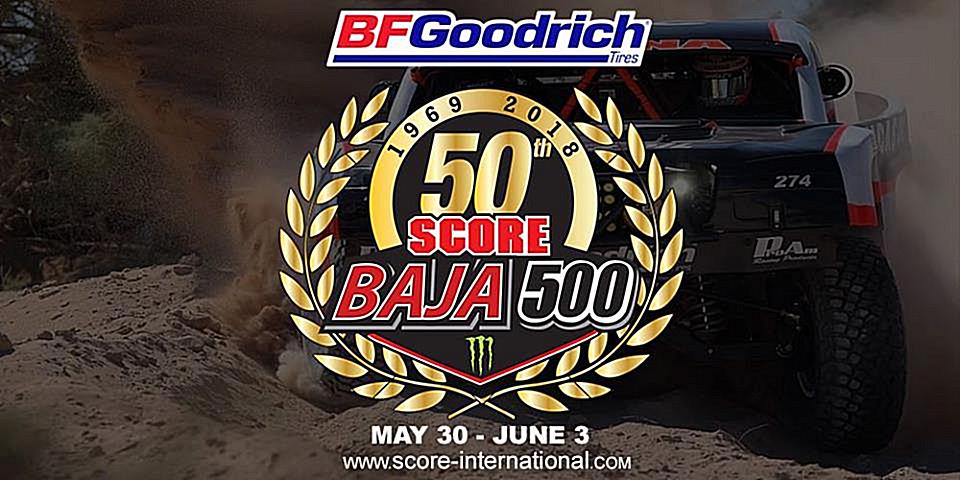 Online racer registration remains open until Wednesday and pre-running on the rugged race-record 542.12-mile course continues through Friday(June 1) a total of 266 vehicles entered so far.

A total of 17 racers who combined for 16 Pro class wins in last year’s SCORE Baja 500 are entered this year with several of them in different classes. Returning 2017 class winners are led by Andy McMillin, San Diego who defeated the field of 233 total starters to also win his featured SCORE Trophy Truck class in the No. 31 Ford F-150.

Last year was the first class win in this race for the other seven returning racers.

The starting order within each class for this race will start with the finishing order from this year’s SCORE San Felipe 250, if the individual entry was received by Monday and paid in full by Wednesday (May 23). For racers who were DNFs in San Felipe but enter by the deadline, a special drawing will be held for them prior to the other entries that come in for each class.

The deadline for those that raced in San Felipe to activate their reserved start position was also yesterday. Deadline for all additional entries to be included in the drawing for starting positions is on 8 p.m. PDT tomorrow (Wednesday, May 23).  The results of the drawing, to determine the remainder of the start order within each class, will be held announced on Friday (May 25).

Late, on-site racer registration will be held next Wednesday, Thursday and Friday (May 30-31, June 1) in Ensenada.

Official practice, or pre-running, on the official race-record 542.12-mile course for this year’s BFGoodrich Tires SCORE Baja 500 opened this pastSaturday. Pre-running starts at race mile 39.30 at Rancho Mezcal and that section from the start to race mile 39.30 may only be run outbound on Thursday and Friday of race-week. GPS files, course notes and preliminary Racer’s Briefing are available on the race page on the SCORE website under race info.

TIME LIMIT: All vehicles will have a 22-hour time limit from the time each vehicle starts