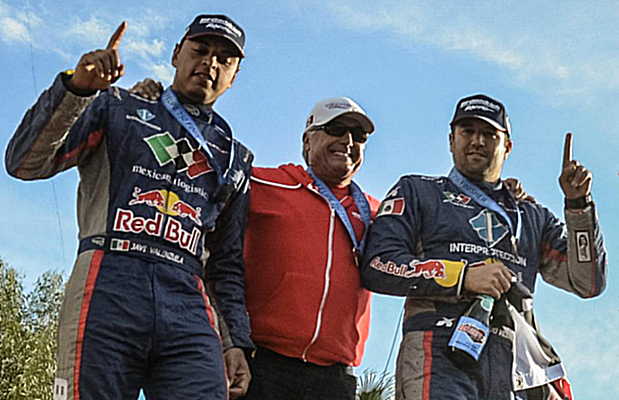 Qualifying on March 30 for season opener of four-race series in Baja California, Mexico

to be televised internationally; Start Draw to be held on Thursday, March 16

ENSENADA, Mexico – Celebrating another decade of excellence, seeing if one of three racers can win the overall title for the fourth time as well as starting and finishing for the first time on the Malecon in the heart of town are just three of the story lines awaiting racers from around the world as racer registration has opened for the 31st Annual SCORE San Felipe 250 in Baja California, Mexico.

The season-opening event of the four-race internationally-televised 2017 SCORE World Desert Championship will be held March 29-April 2 in San Felipe, the quaint fishing village on the Sea of Cortez, 125 miles south of the U.S. Border at Calexico, Calif.
The year of 2017 also marks the 50th anniversary celebration of the legendary season-ending SCORE Baja 1000, the iconic Granddaddy of all Desert Races to be held in mid-November. The SCORE Baja 1000 is the longest continuously held desert race in the world.

Celebrating the 31st anniversary of the youngest of the three legendary SCORE Baja races, sometimes referred to as the SCORE ‘baby Baja’, entries are being accepted on the SCORE website (www.SCOREInternational.com) for Pro and Sportsman entries for cars, trucks, UTVs, motorcycles and quads. Pre-race festivities will be held in San Felipe on March 29, March 30 and March 31 with race day on Saturday, April 1 concluding with the post-race awards fiesta at 10 a.m. PT on Sunday, April 2.

The drawing for starting positions within each class will be held on Thursday, March 16 for all vehicles officially entered by 11 p.m. PT on Wednesday, March 15.

For the first time in the history of this popular ‘Spring Break’ race, SCORE will hold a qualifying session on Thursday, March 30 to determine the starting positions within each class for the SCORE Trophy Truck, Class 1 and Trophy Truck Spec classes.

Four racers have won three overall victories in the SCORE San Felipe 250, a standard which may last for years to come.

The most recent racer to win overall three times in San Felipe was Mexico’s Gus Vildosola Jr, who won three straight (2013, 2014, 2015). Vildosola Jr is now tied with three Las Vegas racers with three overall wins each in this race.

A second generation Mexican desert racer, Vildosola Jr of Mexicali has five class wins in this race including in the No. 21 Vildosola Racing Branix Ford Raptor SCORE Trophy Truck.

Vildosola Jr, with help from his father Gus Sr in 2013 won his first overall. He drove solo the next two years to tie the record in 2015 of three straight overall wins set by Las Vegas racing brothers Ed Herbst and Tim Herbst who won three straight in 1999, 2000 and 2001.

Two other Southern Nevada drivers have three overall wins in San Felipe but not three straight.

One is Las Vegas’ Brian Collins, who won his first in 1990 in Class 1 while splitting driving time with SCORE Baja motorcycle racing legend Jack Johnson, also of Las Vegas. Collins also captured two straight in SCORE Trophy Truck in 2008 and 2009.

The other three-timer in overall victories is Las Vegas’ Rob MacCachren, who has eight class wins in San Felipe and won his three overalls in the featured SCORE Trophy Truck division. MacCachren’s first was in 2007 when his split the driving with Mark Post and his most recent overalls in San Felipe were solo wins in 2011 and 2012. MacCachren, who has won three straight overall victories in the SCORE Baja 1000, drives the No. 11 MacCachren Motorsports Rockstar Ford F-150.

The all-time leader in class wins in the SCORE San Felipe 250 is motorcycle age-group racer Jim O’Neal who has competed in all 30 previous races, winning his class a record 16 times.

Tied for third in class wins with eight each are SCORE Baja motorcycle racing legend Johnny Campbell, Rob MacCachren and Dan Smith who first won in 1984 on a motorcycle and won his final one in 2002 in SCORE Trophy Truck, teaming with David Ashley.

For three decades, the annual motorsports festival that has brought the largest economic impact of any single event held annually in this lightly-populated portion of the rugged, rough and bountifully beautiful Baja peninsula has been the SCORE San Felipe 250.