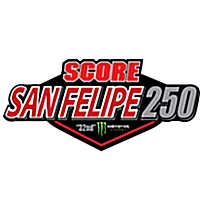 ENSENADA, Baja California, Mexico – Continuing another decade of excellence, seeing if one racer can win the overall title for the sixth time as well as starting and finishing for just the second time on the Malecon in the heart of town are just three of the story lines awaiting racers from around the world as racer registration has opened for the 32nd Annual SCORE San Felipe 250 in Baja California, Mexico.

The season-opening event of the four-race internationally-televised 2018 SCORE World Desert Championship will be held April 4-8 in San Felipe, the peaceful fishing village on the Sea of Cortez, 125 miles south of the U.S. Border at Calexico, Calif. All four 2018 races will be held on Mexico’s magnificent Baja California peninsula for the third consecutive year.
The year of 2018 also marks the 50th anniversary celebration of the legendary BFGoodrich Tires SCORE Baja 500 to be held the end of May and beginning of June. The SCORE Baja 500 is one of the top 10 motorsports events held annually in the world.

While three racers have three overall victories in the SCORE San Felipe 250, Las Vegas’ Hall of Fame racer Rob MacCachren might have set a standard that will last for awhile, unless he breaks his own record of five overall and SCORE Trophy Truck wins.

The most recent racer to win overall three times in San Felipe was Mexico’s Gus ‘Tavo’ Vildosola Jr, who won three straight (2013, 2014, 2015). Vildosola Jr is tied with two other Las Vegas racers with three overall wins each in this race.

Vildosola Jr, with help from his father Gus Sr in 2013 won his first overall. He drove solo the next two years to tie the record in 2015 of three straight overall wins set by Las Vegas racing brothers Ed Herbst and Tim Herbst who won three straight in 1999, 2000 and 2001.

The other three-timer in overall victories is Las Vegas’ Rob MacCachren, who has nine class wins in San Felipe and won his five overalls in the featured SCORE Trophy Truck division.

The all-time leader in class wins in the SCORE San Felipe 250 is motorcycle age-group racer Jim O’Neal who has competed in all 31 previous SCORE San Felipe races, winning his class a record 17 times. Last year O’Neal and his team won the Pro Moto Limited class.

The SCORE Baja 500 is one of the top motorsports events in the world. It was started originally in 1969 by the NORRA organization. Mickey Thompson and his SCORE International organization were invited by the Mexican government to take over the event in 1974. Sal Fish ran and later owned and produced the SCORE Baja 500 for 39 years until he sold SCORE to Roger and Elise Norman in December of 2012. The first Baja 500 organized and produced by SCORE was held on July 24, 1974 as the first of nearly 150 SCORE Baja races.