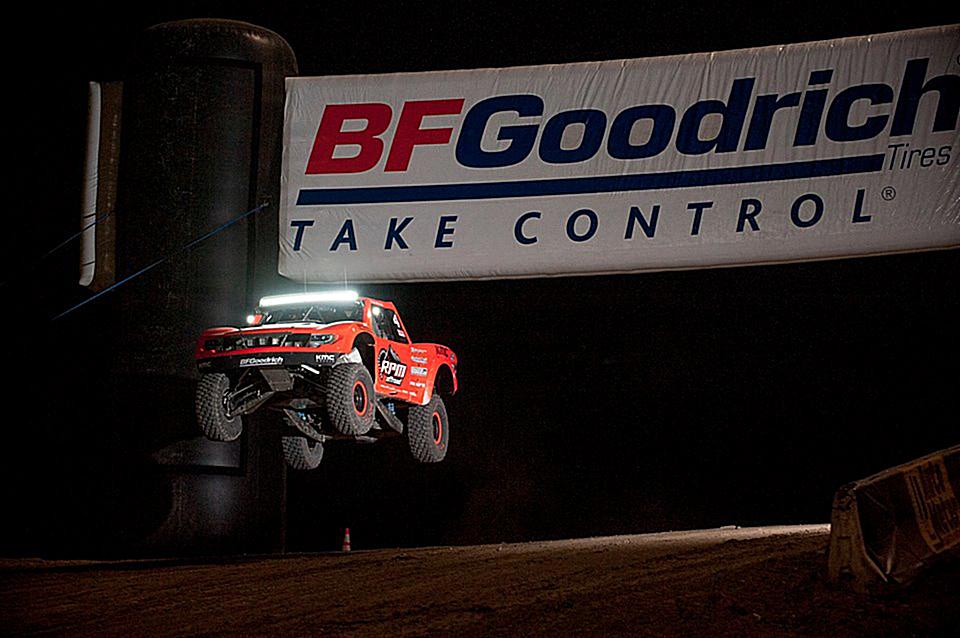 ENSENADA, Mexico—As a prelude to the iconic 49th annual SCORE Baja 1000 desert race, 34 of the world’s top racers are heading to Las Vegas for the SCORE Baja 1000 Qualifying, presented by BFGoodrich Tires. It will be held at 7 p.m. on Tuesday, Nov. 1, on the Off-Road Track at the Las Vegas Motor Speedway.

A total of 26 of the 30 SCORE Trophy Trucks entered in the race and eight of the 20 Trophy Truck Spec race trucks have confirmed participation in the optional qualifying for starting positions within their respective classes. The race, which will have an approximate 854-mile course, will traverse Baja California Norte on Mexico’s majestic Baja California peninsula, starting and finishing in Ensenada, on the shores of the Pacific Ocean. The race and surrounding festivities of the final round of the four-race 2016 SCORE World Desert Championship will be held Nov. 15-20.

On Tuesday, Nov. 1 following a 3 p.m. (PT) media conference and racer meet and greet at the SEMA SCORE Baja 1000 Experience area, all 34 of the qualifying vehicles will start their engines in unison at 4:30 p.m. (PT) at the SEMA SCORE Baja 1000 Experience to begin their travel on the streets of Las Vegas, a police-escorted procession of the high-flying racing machines to the LVMS Off-Road Track.

“We can’t thank SEMA enough for again providing SCORE with this incredible opportunity to once again showcase SCORE and the world’s greatest desert racers,” said Roger Norman, CEO/President of SCORE. “And the special SCORE Baja 1000 Qualifying at Las Vegas Motor Speedway is a great opportunity for many industry leaders and race fans to get a glimpse of these amazing teams.”

For the third straight year, the SEMA Show SCORE Baja 1000 Experience will include a 70,000-square foot desert racing exhibit in the Silver Lot 3 outside of the Las Vegas Convention Center’s South Hall alongside Paradise Road.

In addition to BFGoodrich Tires, King Shocks and Vision Wheel, all SCORE sponsors, will be among several elaborate exhibits inside of the SEMA SCORE Baja 1000 Experience.

A growing total of 223 vehicles are officially entered as of today and nearly 50 additional entries are expected to enter in the four weeks before race day in Ensenada for the legendary race.

So far among the car, truck and UTV classes, SCORE Trophy Truck has the most entries with 30, followed by Pro UTV FI with 21, Trophy Truck Spec with 20, Class 10 with 19, the unlimited Class 1 with 16 and Pro UTV with 14 officially entered to date.

Among the motorcycle classes, the Pro Moto Ironman (solo rider) has eight entries followed by Pro Moto 40 (m/c riders over 40 years old) with six entries by the Pro Moto Unlimited class with five entries so far.

In the Sportsman classes, leading the way is Sportsman Motorcycle with 13 entries to date.

In addition to the 27 States represented on the entry list to date, racers have officially entered from 13 countries.  In addition to the United States, entries so far have come from Australia, Austria, Belgium, Canada, Costa Rica, France, Germany, Guatemala, Japan, Lithuania, Mexico, New Zealand and the US Territory of Guam.

(NOTE: Following is the list of those entries who will be displaying their exotic racing machines at the SEMA SCORE Baja 1000 in Las Vegas Nov. 1-4 and participating in qualifying for the top two classes of vehicles in the race. As of 10.26.16)