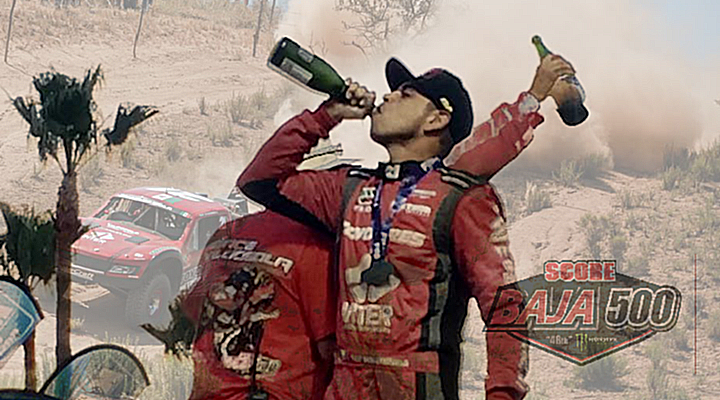 ENSENADA, Mexico—Running his race with a different strategy after opening the season with a did-not-finish, Mexico’s Gus “Tavo” Vildosola Jr thrilled his home country fans with a consistent charge through the northern part of Mexico’s Baja California peninsula to earn the overall and SCORE Trophy Truck win at the internationally-televised 48th SCORE Baja 500 desert race. Starting and finishing in Ensenada, Vildosola bounced back from a rare DNF to scratch out the victory in Round 2 of the four-race 2016 SCORE World Desert Championship.
The challenging international race was stunned by the loss of three lives during the race–two motorcycle riders and one spectator (see inset box below).
The start/finish line for the popular early summer race was once again adjacent to the Riviera del Pacifico Cultural Center on Blvd. Costero in the heart of Ensenada. Entries came from 24 U.S. States and 12 countries.
Vildosola Jr, of Mexicali, beat a field of 236 total starters including 31 vehicles in SCORE Trophy Truck, the sport’s marquee racing division for high-tech, 850-horsepower, unlimited production trucks. Defeating of field that included the virtual who’s who of desert racing, Vildosola covered the blistering hot 477.52-mile Baja course in eight hours, 20 minutes and 55 seconds, averaging 56.86 miles per hour in the No. 21 Vildosola Racing Ford Raptor.
After qualifying 13th for the race, it was Vildosola’s sixth career FIVB SCORE Trophy Truck race win, his second class win and first overall victory in the SCORE Baja 500.
TV TIME
The race will be televised on the CBS Sports Network with the premier showing at 9 p.m. ET on Sunday, July 24. The show, produced with SCORE by award-winning BCII TV of Los Angeles, will be a two-hour special, marking the first time this popular SCORE race has been broadcast in a presentation longer than one hour.

SCORE STATEMENT REGARDING RACE FATALITIES
Regarding the three fatalities during the race, SCORE officials released the following information:
The closing time on the race course was delayed by one hour, 10 minutes as SCORE and local officials worked on the aftermath of an accident early during the start of the cars, trucks and UTVs involving a race truck within a half mile of the start. Racer Todd Pedersen, Orem, Utah, while negotiating a turn entering the Ensenada wash and attempting to avoid some fans, eventually hit three spectators. An eight-year old boy was fatally injured in the accident, according to police on the scene. He was transported to an Ensenada hospital where he was pronounced dead on arrival.
The boy’s mother was hospitalized and is reported in stable condition at a hospital in Ensenada with head and leg injuries. The identities of the two victims were not released.
In the first racer fatality, Pro Moto Unlimited rider Travis Livingston, 34, of Palmdale, Calif., crashed at race mile 288.9. When SCORE medical personnel arrived, while attempting to stabilize him, Livingston went into cardiac arrest and could not be revived.
In the second racer fatality, Sportsman Moto rider Noah Evermann, 34, of Alaska, was found dead near his motorcycle at race mile 180.9 by another race team.
No further information was released regarding all three accidents as all three are still being investigated by Ensenada Municipal Police.