For Pro and Sportsman racers in cars, trucks, UTVs,
motorcycles and quads completing every required race mile
ENSENADA, Baja California, Mexico—Midway through the four-race 2021 SCORE World Desert Championship, 85 of the toughest racers in the world remain in the hunt to earn 2021 Rod Hall SCORE Milestone Awards, presented by VP Racing Fuels. The first two races were the SCORE San Felipe 250 in April and the SCORE Baja 500 in mid-June.
SCORE MILESTONE AWARDS
SCORE is presenting these prestigious awards to the world’s toughest desert racers for the 36th consecutive year. The SCORE Milestone awards will be presented to the car, truck, UTV drivers and motorcycle, quad riders who finish every required mile in the 2021 SCORE World Desert Championship. Racers have been required to cover 746.2 miles so far this season.
NEXT UP
Celebrating its 48th season at the pinnacle of the sport, Round 3 of the four-race 2021 SCORE World Desert Championship will be the 2nd SCORE Baja 400, presented by VP Racing Fuels. With nearly 200 entries expected from 20 U.S. States and 10 countries, 51 competition classes are offered for cars, trucks, UTVs, motorcycles and quads. The youngest event on the SCORE schedule will be held Sept. 14-19 in Ensenada, Baja Calif.
Qualifying for starting positions for SCORE Trophy Truck, SCORE Trophy Truck Legend, Class 1 and Trophy Truck Spec will be held on Wednesday, Sept. 15.
The results of the SCORE Baja 400 will also determine the starting order in each class for November’s season-ending BFGoodrich Tires 54th SCORE Baja 1000, presented by 4 Wheel Parts, the Granddaddy of All Desert Races.
Domestically, the SCORE Baja 400 will be televised on a delayed basis on the World of X Games show on the ESPN2 as co-produced by SCORE International and award-winning BCII TV of Los Angeles.
All four 2021 SCORE races are being held on Mexico’s magnificent Baja California peninsula for the sixth consecutive year.
TOP CLASSES
The 85 racers who have completed all the required miles thus far are from 24 different SCORE racing classes.
Leading the way in the chase for 2021 Rod Hall SCORE Milestone Awards, presented by VP Racing Fuels, are nine superlative stallions in the featured SCORE Trophy Truck division, two in the SCORE TT Legend class, one in the unlimited Class 1, 10 in Trophy Truck Spec, eight in Class 10, 14 in Pro UTV FI (Forced Injection), four in Pro UTV NA (Naturally Aspirated), three in Pro Moto Unlimited, four in Pro Moto Limited and three each in Pro Moto Ironman and Pro Moto 40.
SCORE COMMENTS
“SCORE is privileged to honor the world’s best desert racing drivers and riders,” said Jim Ryan, SCORE Sales and Marketing Director. “For over three decades, SCORE has been very humbled to honor racers with the Rod Hall SCORE Milestone Awards presented by VP Racing Fuels. SCORE racers are the toughest, most rugged racers on the planet. This most prestigious award has become iconic in our sport. It is also a distinct privilege for us to continue to honor the memory of one of the greatest desert racers of all time in having Rod Hall’s name to this wonderful award. And we are grateful to VP Racing Fuels for continuing to help honor these rugged racers as well.”
SCORE TROPHY TRUCK
Celebrating its 28th year since it was introduced by SCORE’s then-owner Sal Fish in 1994, SCORE Trophy Truck is the sport’s marquee racing division for high-tech, 950 horsepower unlimited custom trucks.
For more information regarding SCORE, visit the official website of the SCORE World Desert Championship at www.SCOREInternational.com. 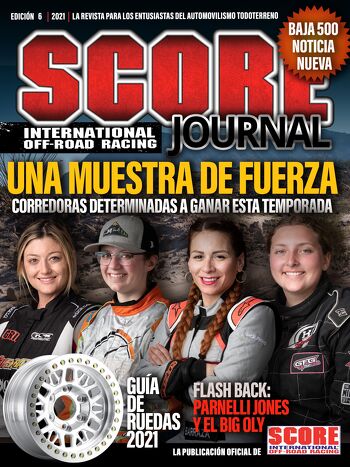