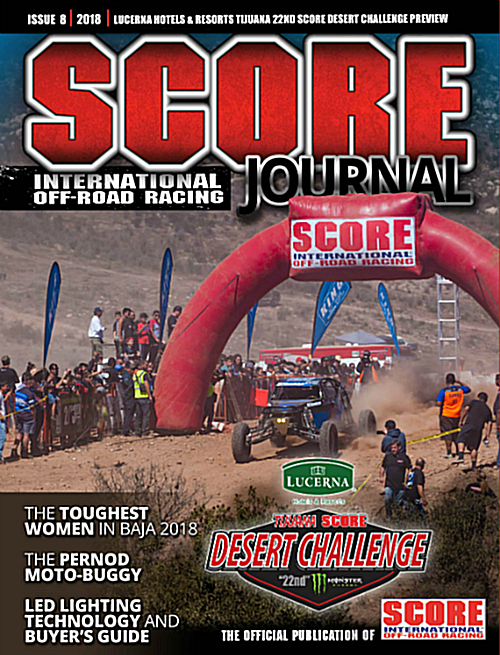 ENSENADA, Baja California, Mexico —Female racers are having an increasingly strong impact on the SCORE World Desert Championship and these women of SCORE racing are spotlighted this month in Vol. 4, No. 8 of the acclaimed SCORE Journal digital online magazine.

“The SCORE racing community is experiencing an extremely memorable 2018 SCORE World Desert Championship and this issue clearly reflects that fact,” commented Jim Ryan, SCORE Marketing and Sales Director and publisher of the SCORE Journal. “This August issue of the SCORE Journal highlights five of the top women in SCORE Baja racing this season in both pictures and words.”

“There is also a very informative story updating all of the safety initiatives that have been implemented by SCORE sincere Roger and Elise Norman bought the organization prior to the start of the 2013 season. Much of the information and quotes came from the recent Stand 21 SCORE Safety Seminar held on July 28 in Mission Beach, Calif.”

“We also take a close look at upcoming Lucerna Hotels and Resorts Tijuana 22nd SCORE Desert Challenge. This issue includes the official course map for Round 3 of the 2018 SCORE World Desert Championship. Tijuana is truly a transformed city and will host our SCORE Desert Challenge for the second straight year in September with two days of racing in a unique racing format for SCORE.”

Vol. 4, No. 8 of the SCORE Journal is once again filled with numerous interesting worth-reading features, stories, exciting videos and several news items.

In the SCORE News section, the major story is the official announcement of the four-race 2019 SCORE World Desert Championship that includes the inaugural Lucerna SCORE Baja 400 in Ensenada in September of next year.

The Off-Road Marketplace in this issue continues to shine brightly on the latest off-road products for 2018 for racers and enthusiasts. Featured this month in the SCORE Journal is LED Lighting Technology in SCORE Baja racing.