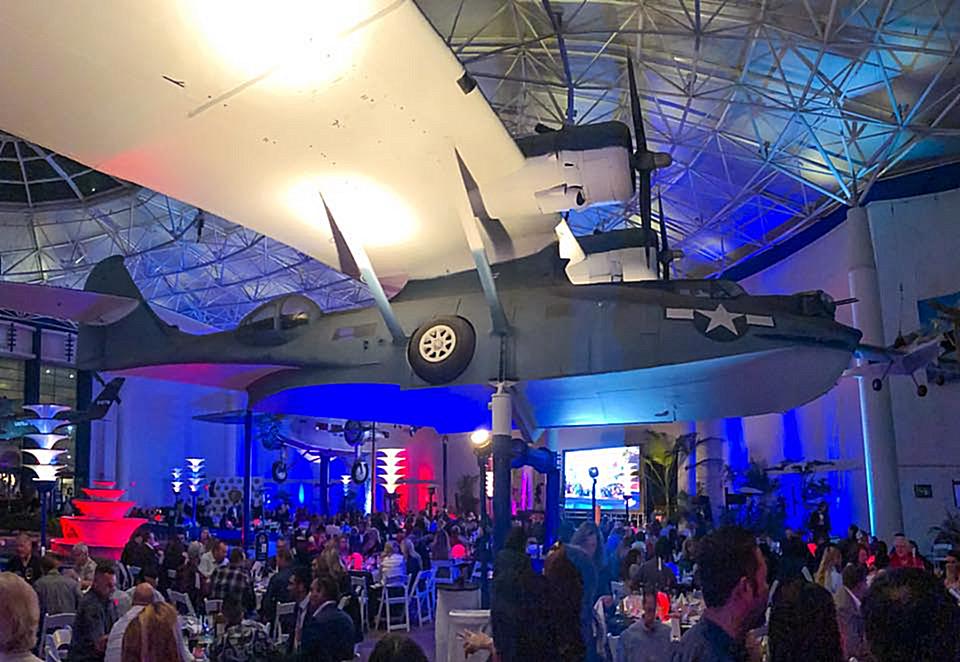 SCORE Off-Roadsman of the Year awards were presented in 14 categories along with the 31 winners of the SCORE Milestone Awards as well as the overall and class point champions of the four-race 2017 SCORE World Desert Championship.

In front of an enthusiastic crowd of nearly 500, the evening was also a celebration of 44 years of SCORE championship desert racing.  Following the lengthy salute to the stars of the 2017 SCORE World Desert Championship, SCORE owner Roger Norman summarized his fifth year as SCORE’s CEO and President.

“We want to sincerely acknowledge the support, assistance and sacrifices made by family members, friends and sponsors–because without their support, the accomplishments of our racers in the series would not have been possible,” commented Norman. “Becoming a SCORE overall or class point champion, winning a coveted SCORE Off-Roadsman Award or a SCORE Milestone Award is an achievement of the highest degree in our beloved sport.”

Acclaimed documentary filmmaker Dana Brown was named the 2017 SCORE Person of the Year.

Born in Dana Point, Calif., Brown has produced through Dana Brown Films a number of lifestyle action sports dramas, including Dust 2 Glory, released in late 2017 that celebrates the SCORE World Desert Championship with up close and personal stories of racers as well as capturing the stark beauty of the Mexico’s magnificent Baja California peninsula and the warmth, friendliness and enthusiasm of the legions of Mexican fans that embrace SCORE Baja racing.

An avid surfer, Brown grew up in filmmaking as the eldest son of legendary documentary filmmaker Bruce Brown (Endless Summer), who passed away shortly after December’s official premiere of Dust 2 Glory.

For Dust 2 Glory, Brown captured all four races of the 2016 SCORE World Desert Championship as well as the 2015 SCORE Baja 1000.

Dana and his talented crew, which included BCII TV (SCORE TV shows’ producer), spent 14 months shooting and another 10 months of editing prior to the first official showing of the new film at last November’s SEMA SCORE Baja 1000 Experience in Las Vegas.

BFGoodrich Tires has been the choice of 31 of the 49 overall winners of the popular SCORE Baja 500.

The SCORE Off-Roadsman awards were determined by online vote of SCORE members as well as the general public. Among the other honorees were the top point leaders from the four-race 2017 SCORE World Desert Championship, the World’s Foremost Desert Racing Series.

In one of the most impressive driving performances in SCORE history, youthful third-generation desert racer Broc Dickerson, Brawley, Calif., was vote the 2017 SCORE Rookie of the Year after a sterling season.

Dickerson, just 16 years old, is a veteran short-course/stadium racer with many Lucas Oil Off-Road Series race wins, 2017 was his first season in desert racing and was competing in the ultra-competitive Class 10 in the No. 1023 Dickerson Racing Chevy-powered Alumi Craft open-wheel desert race car.

Out of the box Dickerson surprised the field in San Felipe to win Class 10 before stunning the class again at the SCORE Baja  500 and pulling off a triple with his class win at the Tijuana SCORE Desert Challenge to take a near-insurmountable lead in the season points for his class.

After finishing 10th in the BFGoodrich Tires SCORE Baja 1000, the unassuming Dickerson won the SCORE Overall Buggy point championship along with the Class 10 season title. He also finished second in overall points for the year among all racers from all classes to help him earn the prestigious 2017 SCORE Rookie of the Year award.

Rick Geiser was voted the SCORE Team Manager of the Year for his work helping coordinate the racing efforts of RPM Racing.

This was the third straight year that Rick and Jeff Geiser have won these individual awards.

“The year of 2017 was another landmark year in the history of SCORE International,” Norman added. “We witnessed a total of nearly 8,000 different drivers/co-drivers, riders/co-riders and from 44 U.S. States and 30 countries that participated in our four spectacular races in SCORE World Desert Championship highlighted by our absolutely amazing celebration of the 50 years of the iconic SCORE Baja 1000.”

“For my wife Elise and I, this was our fifth year as the caretakers of this amazing international treasure we all know as SCORE International. We are even more committed to work with our racers to expand the reach of SCORE even further than it has achieved already.”

It was the third straight year for ‘Apdaly’ Lopez to win the Overall Truck title and second time in three years to win the SCORE Overall point championship, and first time for Dickerson, Arredondo and Burnett to capture overall category titles.

Besides the Geiser Brothers, manufacturer point titles won were led JIMCO Racing Inc. that won the 2017 SCORE Original Buggy Chassis Manufacturer point championship for the 23rd time in SCORE history. Based in Santee, Calif. and housed in a 16,000-square foot facility, JIMCO Racing vehicles were among the top finishers in several SCORE classes in 2017 including the entire top three in the unlimited Class 1 season points.

After another banner year in the SCORE World Desert Championship in 2017, Ray Field’s Dougans Racing Engines of Riverside, Calif. captured the 2017 Engine Builder point championship for the third time.

In the fourth year decided by points, Honda won the SCORE Motorcyle Manufacturer of the Year SCORE Off-Roadsman award for the third time.

In the third year decided by points, Polaris Industries won the SCORE UTV Manufacturer of the Year points for the third straight year

Dan Sanchez, Editor of the popular SCORE Journal digital magazine and SCORE race programs was voted for the first time as the SCORE Journalist of the Year, while GetSome Photo (Art Eugenio) earned the SCORE Photographer of the Year honors for the fourth straight year.

Winning the SCORE Videographer of the Year award for the second time was BCII TV, the award-winning SoCal company that produces all of the SCORE television shows and special content materials for the SCORE website.

Emcees for the evening were SCORE Live announcer Rat Sult and SCORE advisor Juan Tintos Funcke. The invocation and

The original SCORE International was founded in 1973 by the late Mickey Thompson and headed by Sal Fish from 1974 until Fish sold SCORE International to Roger and Elise Norman on Dec. 20, 2012. SCORE continues as the premier sanctioning body in the sport of desert racing. SCORE races feature classes for Pro and Sportsman cars, trucks, UTVs, motorcycles and quads competing in the internationally-televised four-race SCORE World Desert Championship.