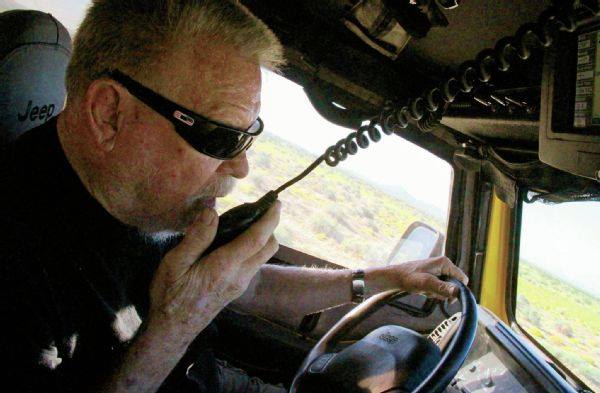 Hall of Fame Off-Road Racing legend Bob “Weatherman” Steinberger died on Tuesday night at his home in Parker, AZ after a long battle with cancer.

“While the off-road racing community is still dealing with the recent death of SCORE Tech Director Art Savedra, SCORE is also grieving now for the passing yesterday of Bob Steinberger,” said SCORE International President Roger Norman. “Known as the ‘Weatherman’ throughout the desert racing community, Bob was inducted into the Off Road Motorsports Hall of Fame in 2013. He was the relay communications announcer for SCORE races for over 30 years. A friend to the racers as he kept chase crews in touch with their teams as good as possible, his passing reminds us even more how fragile all of our lives are and how we need to embrace each day with the dedication, passion and enthusiasm that Bob exuded for over 40 years of working communications for races from all desert racing organizations. We share in the grief of Bob’s family and the entire desert racing nation.”

PCI Race Radios announced Steinberger’s death on its Facebook page Wednesday, along with the following recap of his remarkable contribution to the sport.

Bob found his niche within off-road in that pivotal year of 1972 when he became good friends with Bill Stroppe. Bob received an invitation from Bill to chase the Baja 1000 that year. Bob and two guys trekked to race mile 800 with a two gas cans and a truck full of adventure. Two days passed with no word from the race truck. Eventually, the truck arrived, the gas was dumped and the truck pushed on to the finish.

Bob expressed his frustration with the team, explaining they should put two-way radios in the vehicles so the two could communicate. The following year, Bob put communications in the vehicles of Stroppe, MacPherson and Walker Evans. At the 1974 Mint 400, he sent up three weather balloons with five hundred feet of coax attached and the first successful relay from a pit was made. It is believed that it was Joe MacPherson who couldn’t remember his name, so he dubbed him “Weatherman” on the radio. The rest is history and iconic status has been reached through nearly half a century of work with the company he founded, PCI Race Radios.

Bob’s dedication to The Weatherman Relay was so important to him that in the recent weeks as he battled cancer, he asked his son Scott Steinberger to carry on the Weatherman Legacy in his name. Scott accepted the honor and responsibility and has filled in for his Dad at the last few races, as he was too ill to travel.

Bob was an avid off-road enthusiast. When not providing communication relays from the top of Mount Diablo for SCORE Baja  races, he was on the ground in the Nevada and Arizona desert providing retrieval efforts with his famous “Yellow Zebra Jeep” at BITD races. He loved rock crawling and all things off-road. Bob also enjoyed hunting and spending time on the river with his friends and family.

In 2013, Bob was inducted into the Off-Road Hall of Fame. A great honor and a fitting recognition for a man who has spent almost half a century dedicated to such an amazing culture and sport.