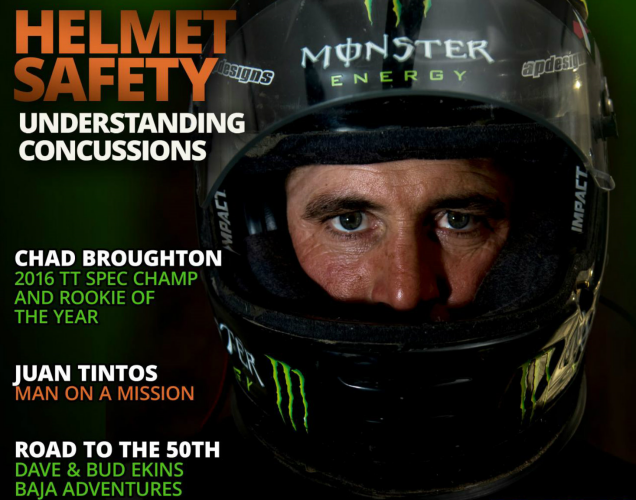 ENSENADA, Mexico — From the brothers who recorded the first non-stop motorcycle ride down the Baja California peninsula to the 2016 SCORE Rookie of the Year, this month’s Vol. 3, No. 2 of the acclaimed SCORE Journal is full of interactive news and features now live on the SCORE website at www.SCOREInternational.comand is available through SCORE social media channels as well as a direct link at SCORE Journal, Vol. 3, Issue 2. 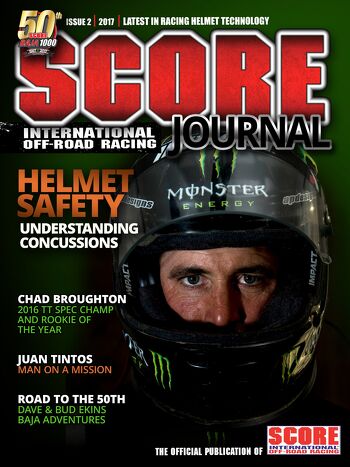 Among the key features are the cover story on helmets, safety and understanding concussions. There is also an in-depth view of the SCORE Rookie of the Year from the 2016 SCORE World Desert Championship, and an insightful historical feature on the legendary Ekins brothers and their early Baja adventures that appears in the magazine this year on the road to the 50th SCORE Baja 1000.

“I have personally been part of the magazine publishing world for over 30 years and I am continually amazed with the quality and reach of the digital edition of the SCORE Journal,” commented Jim Ryan, SCORE Director of Marketing and Sales. “The SCORE Journal has started its third year and find myself again saying that this is our finest issue to date.”

“With dynamic features, this issue delves diligently into the world of racing helmets and revealing information to help us understand more the overall impact and consequences of concussions in our desert racing world. There is also a first look at the new Chevrolet Colorado ZR2.”

Vol. 3, No. 2 of the SCORE Journal is once again filled with several interesting must-read features and news items.

Above all else, Safety is paramount at SCORE International. This is reflected in our investigative report on racing helmets and competition concussions.

Another feature looks closely at how Juan Tintos, SCORE’s new Mexico Liaison, is cultivating existing relationships as well as forging new ones among the people and governmental agencies of Baja California and all of Mexico.

There is also a ‘fab-ulous’ feature about Troy Johnson of the Fab School and how he built a 1974 Ford Bronco for his daughter.

Noted motorcycle journalist/photographer Mark Kariya also teams with our own SJ editor Dan Sanchez for a revealing review of those glorious first attempts to conquer the Baja peninsula by the Ekins brothers. This amazing feature is part of the special continuous feature on “The road to the 50th anniversary” of the iconic SCORE Baja 1000 feature series that is part of each SCORE Journal in 2017.

Among the SCORE News is a story on the legendary Sal Fish, SCORE’s owner for 38 years until Dec. 20, 2012, who has graciously accepted the invitation to be the grandest of grand marshals for this year’s 50th SCORE Baja 1000 in November.

From award-winning documentary filmmaker Dana Brown, Dust2Glory has chronicled each of the four races in the 2016 SCORE World Desert Championship. D2G, which began shooting at the 2015 SCORE Baja 1000, continued up close and personal coverage capturing the robust racers in their amazing adventures in Mexico’s majestic Baja California peninsula through all four spectacular 2016 races. Dust2Glory is scheduled for release this year.