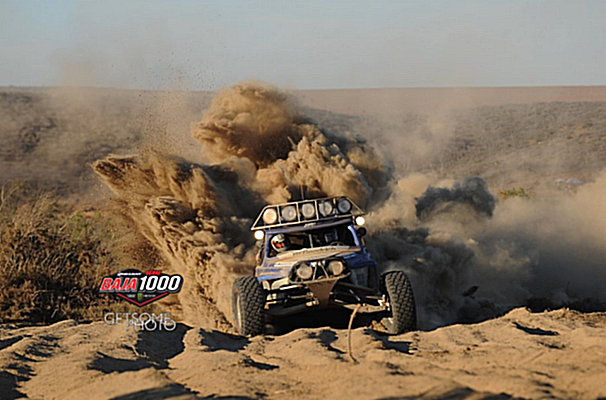 More classes to highlight broadcast of final Round of 2016 SCORE World Desert Championship,

From award-winning show producers BCII TV of Los Angeles, a video preview of the telecast is available at

Methodically mastering a radically rugged course and a celestial field of challengers, MacCachren rolled like a Rockstar, with an assist from co-driver Jason Voss, driving to the overall and SCORE Trophy Truck victory on Nov. 19 at the SCORE Baja 1000. The victory in the Granddaddy of All Desert Races gave the veteran MacCachren a rare three-peat in the world’s toughest, roughest, longest and most prestigious continuously-held desert race.

MacCachren, with a big assist from co-driver Jason Voss, rocketed to a memorable race around the northern part of Mexico’s mysterious and majestic Baja California peninsula. The daring duo finished the mentally-draining, physically grueling, vehicle-destroying 854.50-mile race that started and finished in Ensenada in 17 hours, 12 minutes and 58 seconds while averaging a solid 49.63 miles per hour in the No. 11 Rockstar Energy MacCachren Motorsports Ford F-150.

In winning the iconic Granddaddy of all Desert Races for the third straight year, they defeated a field of 270 starters in cars, trucks, UTVs, motorcycles and quads. The starting grid included 31 starters in the marquee SCORE Trophy Truck division for high-tech, 850-horsepower unlimited production trucks.

What originally was planned as a solo ride in the Pro Moto Unlimited class, went to a two-rider effort on Monday of race week, ended up with a five-team effort to help the injured rider of record Colton Udall, Yucca Valley, Calif. finish the 2016 SCORE World Desert Championship undefeated with four straight victories.

With a whole lot of help from his friends after he was injured while pre-running three nights before the race, taking the overall and unlimited class win for the fourth time in the last five years in this race was the Ox Motorsports team led by Udall, Yucca Valley, Calif.

Suffering a severely broken left collar bone while pre-running near Borrego Tuesday evening of race week, Udall quickly adjusted his rider list for his 1x Honda CRF450X, moving one rider from his Ox Motorsports 3x motorcycle and quickly recruited two additional riders to pick up the slack for his 1x team.

SCORE rules call for a rider of record to either start or finish a race, Udall wanted to win the race and the season point championship so he returned to Ensenada after surgery in San Diego to start the race and ride to the around first turn some 200 yards from the start to fulfill that requirement.

Udall’s championship winning team rode their Honda over the rugged course to a winning time of 18:16:43 and an average speed of 46.75 mph.

While Udall has now earned four overall race wins in the SCORE Baja 1000, Samuels and Kamo have won three each and this was Jones’ second straight.

From award-winning documentary filmmaker Dana Brown, Dust2Glory has chronicled each of the four races in the 2016 SCORE World Desert Championship. D2G, which began shooting at last year’s SCORE Baja 1000, continued up close and personal coverage capturing the robust racers in their amazing adventures in Mexico’s majestic Baja California peninsula through all four spectacular 2016 races.