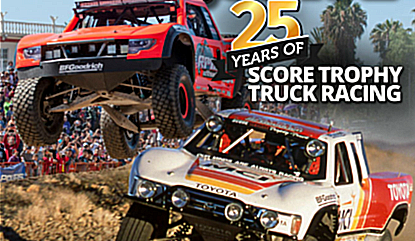 Celebrating 25 glorious seasons at the pinnacle of desert racing…

Early entries from 34 U.S. States, 15 countries for Granddaddy of All Desert Races;

ENSENADA, Mexico— Launched in 1994 by then SCORE owner Sal Fish, SCORE Trophy Truck, the marquee desert racing division for high-tech, 950-horsepower, unlimited custom trucks, is culminating its 25th season in 2018, concluding the celebration with next month’s 51st annual SCORE Baja 1000. With 34 entries to date in this year’s SCORE Trophy Truck field, the iconic season-ending Round 4 of the 2018 SCORE World Desert Championship will be held Nov. 12-18, starting and finishing in Ensenada, Baja California, Mexico.

To date for November’s 51st SCORE Baja 1000, there are 180 total early entries with racers from 34 U.S. States and 15 countries officially signed up to compete. In addition to the United States, the U.S. Territory of Guam and host country Mexico, the other countries with racers entered are Argentina, Australia, Austria, Canada, Costa Rica, England, Finland, France, Germany, Italy, New Zealand, Peru and Sweden.

SCORE Trophy Truck (including the SCORE TT Legend class), the marquee SCORE racing division for high-tech, 950-horsepower, unlimited custom trucks class will have a special qualifying session for start positions at 6 p.m. PT next Tuesday, on the Off-Road Track at Las Vegas Motor Speedway. The marquee SCORE racing division will be showcased next week (Oct. 30-Nov. 2) at the massive SEMA SCORE Baja 1000 Experience at the SEMA Show at the Las Vegas Convention Center.

The field also has 12 racers who have combined for 13 SCORE Baja 1000 race wins in the last 14 years, including 11 straight SCORE Trophy Truck race winners in this iconic event.

Also on this year’s entry list are two son/father teams who each have on this race once in SCORE Trophy Truck, the only Mexican nationals who have won this race in this marquee division.

Both teams winning when the race went down the peninsula to La Paz, Baja California Sur. Gustavo ‘Tavo’ Vildosola won this race in 2010 with his father Gustavo Vildosola Sr., both of Mexicali, Mexico. And last year’s Golden anniversary celebration of the SCORE Baja 1000 was won by Carlos ‘Apdaly’ Lopez and his father Juan C. Lopez, both of Tecate, Mexico.

Roeseler’s lone SCORE Trophy Truck win in the SCORE Baja 1000 was in the 2008 peninsula run from Ensenada to La Paz when he was the second driver for team owner Roger Norman, who has been the SCORE owner since the start of the 2013 season.

Roeseler has 17 career class wins in the SCORE Baja 1000, including a race-record 13 overall race wins (10 on a motorcycle, two in a desert race car and one in a SCORE Trophy Truck). For the second straight year he will be the second driver for third-generation desert racer Luke McMillin in the No. 83 Ford F-150 in SCORE Trophy Truck.

Including SCORE Trophy Truck (34), six total classes already have double figures in terms of entries so far. While several other classes have nearly reached at least 10 entries, the other classes with double figure entries to date are: Trophy Truck Spec (23), Pro UTV FI (Forced Induction) (19), Class 10 (13), unlimited Class 1 (12) and leading the Sportsman classes is SPT M/C with 11 entries so far.

Teams began pre-running or practicing on the race course last Saturday. Starting from north of Ojos Negros as the section from the start to Ojos Negros will be restricted, pre-running starts at race mile 38.40 at Rancho El Mezcal which is 5.6 miles southeast of Ojos Negros. On the return, pre-running ends at race mile 767.26. The official course map for the 806.76-mile route, course notes and GPS files may be found under the SCORE Baja 1000 logo on the Race Info page on www.SCORE-International.com.

For this year’s 51st SCORE Baja 1000, SCORE International has named Mexico’s beloved tourism official Nico Saad, the only person who has been behind the scenes at all 50 of the previous races, as the Grand Marshal for this year’s anniversary of the world’s most iconic desert race.

Honorably humble, unusually unassuming, famously friendly by nature while constantly and consistently working diligently behind the scenes by choice on behalf of SCORE Baja racing for nearly 45 years, Saad is the beloved owner of the San Nicolas Resort & Casino and extremely cherished and productive President of Proturismo de Ensenada. Saad is the only person who has been part of all 50 Baja 1000 events, obviously including the 44 produced and sanctioned by SCORE International.

(following first 3 of 4 races. DOR/ROR must start or finish minimum of three races; one must be SCORE Baja 1000)