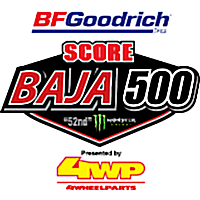 Following planning with and approval from city and state governments, SCORE International has announced that all the official pre-race activities and the start/finish line compound for this year’s SCORE Baja 500 will be held in a restricted area at the prominent El Dorado Ranch resort with no spectators allowed. Spectators following health and safety protocols will be allowed in the open areas around the 495-mile race course.
With the safety and health restrictions in place, SCORE will produce extensive live streaming of the race and pre-race festivities air on the SCORE website and SCORE social media platforms.
START ORDER/DRAW DEADLINE
For all the non-qualifying classes, the starting order within each class for this race will be determined by a start order drawing, if the individual entry is received and all fees paid in full by 8 p.m. on Friday, September 11.
The results of the drawing, to determine the remainder of the start order within each class, will be posted on the SCORE website at 5 p.m. on Friday, September 18.
Between September 11 and 5 p.m. PT on September 18, entries will be accepted in the SCORE Ensenada office but those entries will not be able to qualify or be in the start draw. Late, on-site racer registration will be held on Wednesday, Thursday and Friday (September 23, 24, 25) and will be given the next available start position within their respective classes.
All entries received after 8 p.m. PT on Friday, September 11 will be given the next available starting position within their respective classes.
PRE-RUNNING
Official practice, or pre-running, on the official 495.0-mile race course for this year’s BFGoodrich Tires 52nd SCORE Baja 500, presented by 4 Wheel Parts will begin at 8 a.m. PT on Saturday, September 12 starting at race mile 0.16 and finishing at race mile 485.16. Pre-running starting at 8 a.m. PT on Wednesday, September 23 through Friday, September 25 will start at race mile 0.0 to race mile 7.80 outbound only.
The official SCORE Racer Brief, course map and GPS files will be available by 6 p.m. PT on Thursday, September 10.
MAIN COURSE
The race will feature a course, when finalized and plotted over the next several days by SCORE President/Race Director Jose A. Grijalva of right around 495.0 miles. It will run both North and South of San Felipe in a counterclockwise direction on the East side of the Baja California peninsula.
When completed, the historic race course will be another memorable example of all that Mexico’s Baja California has to offer, including high-speed dirt trails, sandy, rocky and silty natural terrain, majestic Baja washes and canyons, stretches along the ocean with elevations from sea level to over 3,000 feet. The course will be another jewel reflecting the stark beauty of Baja California.
There will be three physical checkpoints, much of the course will run through Laguna Salada as well as going through parts of four of Baja California’s infamously magnificent washes: Amarillas, Chanate, Huatamote and Azufre.
DETAILS
As required by the health and safety protocols required to conduct this race, race week activities will have restricted access at the Eldorado Ranch with no spectators allowed for contingency, tech inspection and the start/finish compound.
On-site Racer Registration and Media Registration, again with restricted access, will be held on Tuesday, Wednesday, Thursday and Friday (September 22-25) at the Pavilion at El Dorado Ranch.
Racer registration will be held for racers who are qualifying from 3 p.m. to 8 p.m. on Tuesday (Sept. 22). Racer registration for the balance of the entries will be held on Wednesday (Sept. 23) from Noon to 7 p.m. PDT, on Thursday (Sept. 24) from 8 a.m. to 5 p.m. PDT and from 8 a.m. to 5 p.m. on Friday (Sept. 25) with no new entries accepted after 3 p.m. PDT on that final day of registration.
SCORE Media registration will be held in the Pavilion at El Dorado Ranch from 3 p.m. to 6 p.m. on Tuesday (Sept. 22) from 1 p.m. to 5 p.m. PDT on Wednesday (Sept. 23) and from 9 a.m. to 5 p.m. PDT on both Thursday and Friday (Sept. 24-25).
LIVE STREAMING
On the two days of contingency (Sept. 24-25) and during the race on Saturday, Sept. 26 until the course closes on Sunday morning, Sept. 27, there will be extensive live streaming from the start/finish line compound broadcasting race activities and start and finish line interviews. Popular Rat Sult will again serve as primary host of the SCORE live streaming along with assistance from Karolina Hirales.
With no spectators allowed in the start/finish line compound, all of the week’s activities will be streamed both live and same-day including the race, airing via the internet on the SCORE website and social media platforms.
LAST YEAR’S CHAMPS
San Diego’s Andy McMillin is expected to be back to defend his overall win in last year’s SCORE Baja 500 in his No. 1 McMillin Racing all-wheel drive Chevy Silverado SCORE Trophy Truck built by Mason Motorsports. In Pro Motorcycles, Justin Morgan, El Cajon, Calif. and his co-riders Mark Samuels, Yucca Valley, Calif. and Justin Jones, Murrieta, Calif. are expected to defend their overall motorcycle title on their No. 1x Honda CRF450X, competing once again in the Pro Moto Unlimited motorcycle.
SCOREscope
2020 SCORE SKED