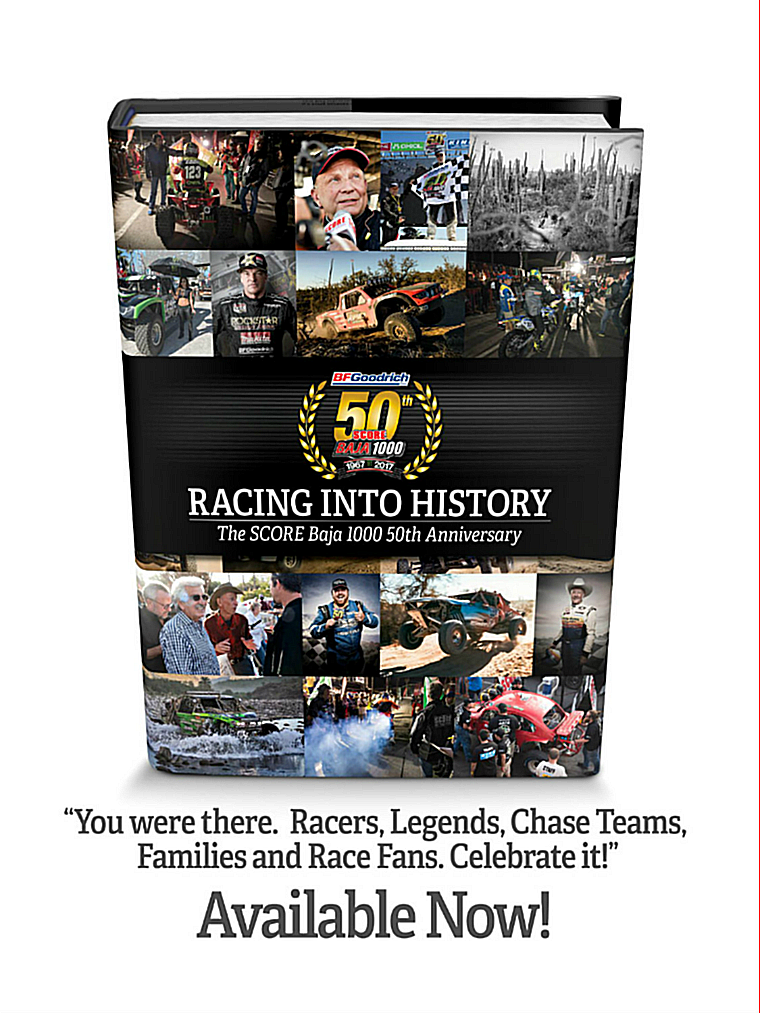 Granddaddy of All Desert Races

ENSENADA, Mexico— Chronicling the Golden Anniversary of the Granddaddy of All Desert Races the colorful 416-page ‘Racing into History’ hard-cover book salutes last November’s BFGoodrich Tires 50th SCORE Baja 1000 and is now available for purchase on the SCORE website At The SCORE STORE.

Receiving rave reviews in early release, the commemorative book spotlights many of the legends of SCORE Baja racing as well as providing a complete look at the stats from the first 50 years of the epic event. Questions regarding the sales and shipping of the book may be directed to the SCORE office in Reno, Nev. at 775. 852.8907. The purchase price for this once-in-a-lifetime book on the legendary SCORE Baja 1000 is US$100.

While the entire project was overseen by SCORE Sales and Marketing Director Jim Ryan, contributors to the research, interviews, photography, text and graphics involved in the near 10-month project were numerous.

“While truly hundreds of people have contributed to the completion of this massive project, there are several that should definitely be highlighted,” commented Ryan. “First and foremost, without the passion and enthusiastic support of this book project by SCORE owners Roger and Elise Norman, it would have never happened.”

“We believe we have truly captured the essence of this international racing icon for generations to come. It was definitely a tremendous undertaking and a veritable labor of love.”

The race itself featured 404 official starters from 44 U.S. States, the District of Columbia, the U.S. Territories of Guam and Puerto Rico and 28 countries. The Golden Anniversary race started in Ensenada and finished in La Paz.

Mexico’s son and father team of Carlos ‘Apdaly’ Lopez and Juan C. Lopez captured the overall and SCORE Trophy Truck victory and the special US$50,000 bonus from race title sponsor BFGoodrich Tires. The duo covered the grueling golden 1,134.40 miles in 19 hours, 53 minutes and 36 seconds to race into history while averaging 57.02 miles per hour in their No. 1 RPM Racing Chevy Rally Truck.

A total of 36 pages of the book are devoted to pre-race activities along with another 162 pages to the race itself and the post-race awards ceremony.

Among the items in the pre-race section of the book is coverage of the build, the celebration of a golden anniversary, the new SCORE Baja 1000 Walk of Fame, the Monster Party, the Media Conference with BFGoodrich Tires awards, the Opening Ceremony and 10 pages of the official 50th SCORE Baja 1000 entry list. The world’s most iconic, oldest, prestigious and longest continuously held desert race, this year’s SCORE Baja 1000 will be a loop race of 806.76 miles in the northern state of Mexico’s majestic Baja California peninsula. It will start for the 44th time and finish for the 25th time in Ensenada and dates for the race and race week festivities are Nov. 12 through Nov. 18. The race is annually the finale of the four-race SCORE World Desert Championship, which has been held exclusively for the past three years in Baja California.

With a total time limit of 36 hours in the elapsed-time race, the motorcycle and quad classes will start at 4 a.m. (PT) on Friday, Nov. 16 and the car, truck and UTV classes will follow with their start on at 10:30 a.m. (PT)on Friday, Nov. 16. This year’s course map is available on the SCORE website under race info on the SCORE Baja 1000 page at www.SCORE-International.com.

Racer Registration for this year is open at www.SCORE-International.com under Race Info on the SCORE Baja 1000 page. Any questions, contact SCORE Registration Director Audreonna Cuarez at 775. 852.8907.