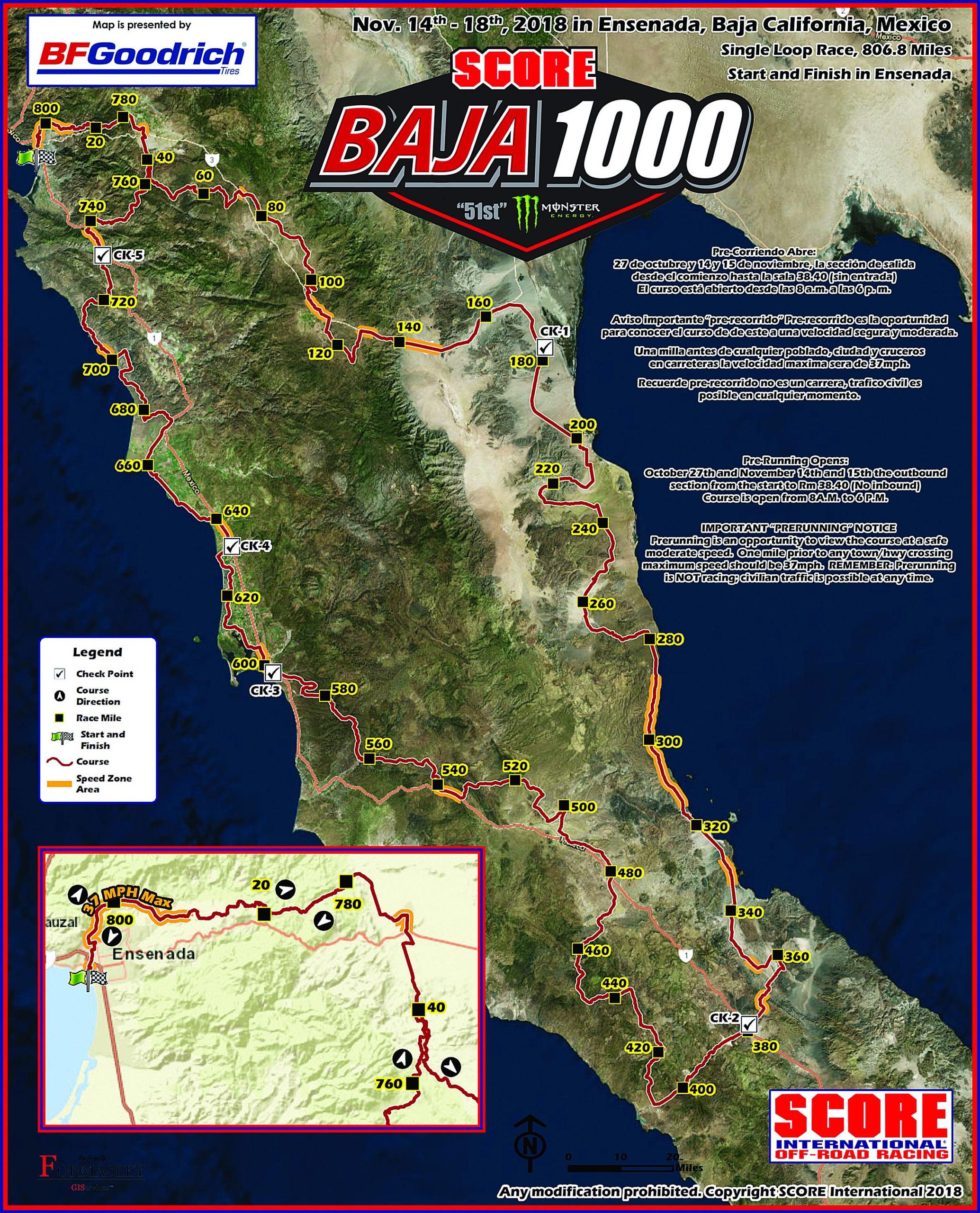 The world’s most iconic, oldest, prestigious and longest continuously held desert race, this year’s SCORE Baja 1000 will be a loop race of 806.76 miles in the northern state of Mexico’s majestic Baja California peninsula. It will start for the 44th time and finish for the 25th time in Ensenada and dates for the race and race week festivities are Nov. 12 through Nov. 18. The race is annually the finale of the four-race SCORE World Desert Championship, which has been held exclusively for the past three years in Baja California.

With a total time limit of 36 hours in the elapsed-time race, the motorcycle and quad classes will start at 4 a.m. (PT) on Friday, Nov. 16 and the car, truck and UTV classes will follow with their start on at 10:30 a.m. (PT)on Friday, Nov. 16. This year’s course map is available on the SCORE website under race info on the SCORE Baja 1000 page at 51st Annual Baja 1000 Course Map

The colorful and extensive 51st SCORE Baja 1000 exhibit area in Building 5 is again offering desert-racing and off-road performance fans the opportunity to interact with many of the top desert racers in the world and legends of the sport while enjoying viewing the most radical motorsports vehicles ever developed from the past and the present.

As a special added attraction to the SCORE Baja 1000 Exhibit at this year’s event is a pair of book signing sessions to help launch the sale of the new 416-page hard-cover book entitled ‘Racing Into History’, a pictorial celebration of last November’s BFGoodrich Tires 50th SCORE Baja 1000.

While the elaborate book, which features a historical records section as well, will be on sale again Sunday at the Expo and the final showcase book signing session will be held from 12 p.m. to 2 p.m. PT.

As it has for over four and one-half decades, SCORE has put together another memorable race course for the 51st anniversary, this one a loop race, with all of the foreboding, unforgiving terrain that the northern state of the majestic Baja California peninsula has to offer. SCORE Race Director Jose A. Grijalva has designed and finalized this year’s race course of 806.76 miles. The course will have five checkpoints along the way to the finish and 192 visual checkpoints.

Pre-running (Oct. 27) starts 5.6 south of Ojos Negros at Rm 38.4 and the course heads out to Jamau. After Jamau before the ‘Goat Trail’ there is a new short section that has never been raced on.
Course will go to Kiliwas and out to Hwy 3 to San Matias, over to the desert in San Felipe. South of San Felipe it loops around Amarillas Wash and comes back to Old Puertecitos Road on Huatamote Wash, head south to the Sulphur mines and turn right and will loop back using Matomi Wash to Old Puertecitos Highway.
South from Puertecitos to Gonzaga Bay and before Coco’ s Corner it turns south and takes a new trail that will take racers back to the main road out to Chapala.
At Chapala the course goes across Hwy 1 and does a loop behind Cataviña where there is tons of silt and nasty hill climbs.
North of Cataviña the course goes back across the peninsula on the east side of Hwy 1 and heads north to Rancho Victoria and more silt before and after this ranch in the Rm 490 to Rm 510 area.
It then drops down to El Rosario Wash and goes north to San Quintin on a fast smooth road that has never been raced on.
In San Quintin the course runs north and hits the coast to Santo Tomas, taking pavement to Uruapan and back to Ojos Negros and to the finish in Ensenada.

The 2018 Lucas Oil Off-Road Expo is once again the largest and greatest collection of off-road companies, parts, equipment, gear, and experts assembled in America. From off-road racing to rock crawling, trail riding to sand sports, motorcycles to quads and camping to adventure travel, the event provides the unique opportunity to meet and talk with the most knowledgeable people in the off-road industry. With a full weekend of excitement, other event features include over 350 industry-specific vendors, the Lucas Oil Off-Road Racing Demo at the MAV TV Proving Grounds, Rubicon Trail – Off Road Vehicle Ride Along, O’Reilly Auto Parts Show-N-Shine and live music all weekend at the STEEL-IT Main Stage.