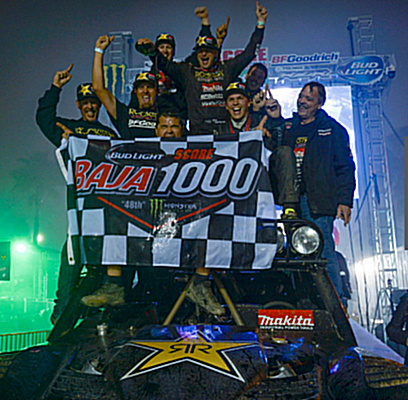 with preview of Dust 2 Glory docu-film; live streaming at www.SCORE-International.com

POMONA, Calif., USA—It’s time to drop the green flag for another spectacular Lucas Oil Off-Road Expo at the Fairplex, in Pomona, Calif., USA and SCORE International will once again be a major part of this weekend’s popular public trade show. The annual event will be open from 9 a.m. to 6 p.m. on Saturday and from 9 a.m. to 5 p.m. on Sunday.

In addition to showcasing current SCORE desert racing vehicles, drivers and sponsors, the 50th BFGoodrich Tires SCORE Baja 1000 official course map for the race will be unveiled by SCORE officials at 3 p.m. (PT) on Saturday along with outlining the race schedule including the SEMA Qualifying activities for the marquee SCORE Trophy Truck division.

Crowd favorite autograph sessions will also be taking place from 12:30 p.m. to 2 p.m. on both Saturday and Sunday with many of the stars of the sport, both past and present who have built their legacy in the SCORE Baja 1000.  Additional highlight of the SCORE Baja 1000 exhibit will be the SCORE Monster Energy Cinema, featuring SCOREvision, massive LED screen showing race telecasts that have aired on the CBS Sports Network as well as historical race videos that are part of the legendary legacy of SCORE Baja racing.

“There is no one in the off-road world that we would have considered more worthy of being the Grand Marshall for the 50th than Sal Fish,” said SCORE owner Roger Norman, himself a former SCORE Baja 1000 overall winner. “He brought so much to the sport from the rule book to the first television exposure to all the major sponsors and manufacturers that have used SCORE and the SCORE Baja 1000 as the proving grounds for so many different products.”