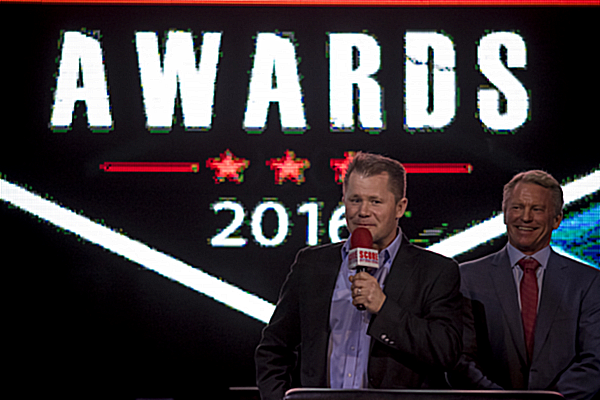 The son of the late legendary Hall of Fame Unlimited Hydroplane racer Bill Muncey, who has killed in a racing accident in 1981 in Acapulco, Mexico, Muncey is the half-brother of SCORE’s Norman.

“This is truly like a dream come true for me to be able to work with my brother Edward like this with SCORE,” commented Norman. “Edward has considerable experience and amazing knowledge of digital media, monetization, content protection and developing a scale for rapid growth, areas that we have only begun to scratch the surface on at SCORE. He brings a whole new level of professionalism to our SCORE Management Team and his contributions to SCORE will be immeasurable.”

Muncey joined the world’s largest mixed martial arts organization (UFC) in 2006. Formerly Vice President of Worldwide Sales for Travelscape/Expedia, he was hired to develop a global business for the UFC on the web and help position it as one of sports industry’s leaders in the digital space.

Under Muncey’s direction, the UFC established a worldwide digital media presence that includes localized versions of UFC.com in nine different languages. Muncey also oversaw the UFC digital distribution of live Pay-Per-View event broadcasts and Video On Demand, which are accessible around the world on computers, mobile and connected devices. These efforts have helped the UFC firmly cement its place as the largest Pay-Per-View event provider in the world.
Muncey graduated from Valhalla High School in El Cajon, Calif. prior to matriculating to San Diego State. While he and his family will be relocating back to San Diego from Las Vegas he has already begun his role with SCORE International.

“Following the acquisition of SCORE International in 2012 by Roger and Elise and the many successful strides they have made to expand beyond their premier desert racing events, they’ve already evolved SCORE into the next-generation desert racing organization through important pillars they’ve established in safety, race competition rules, race tracking, and television reach,” said Muncey.

“Their vision to greatly expand and fortify the digital presence is one the most important next steps within their grand plans for SCORE and I’m happy to be able contribute my experience.”

“Under a disciplined approach, we will accelerate the reach and awareness of SCORE International and the SCORE off-road brands, the associated events, participating drivers & race teams, manufacturers, sponsors, and host-cities while leveraging the powerful affinity for off-roading within the multi billion-dollar consumer market.  I’m one person among millions of aspiring desert-racing enthusiasts who are very passionate about off-roading and have always looked at the SCORE Baja races as the elite proving grounds to test vehicles and accessories that eventually make it to the marketplace for street and off-road vehicles.”

SCORE International was founded in 1973 by the late Mickey Thompson and headed by Sal Fish from 1974 until Roger and Elise Norman purchased SCORE on Dec. 20, 2012. SCORE continues as the premier sanctioning body in the sport of desert racing. SCORE races feature classes for Pro and Sportsman cars, trucks, UTVs, motorcycles and quads competing in the internationally-televised four-race SCORE World Desert Championship.