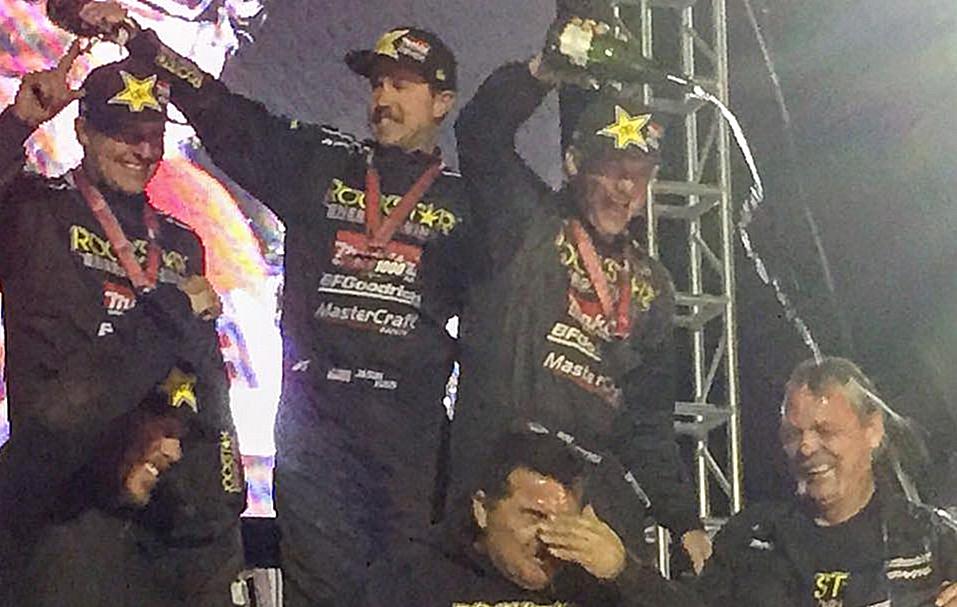 POMONA, Calif., USA—Clearly showing the international interest in the Granddaddy of all Desert Races, very early entries in just one week of online racer registration have come from 28 U.S. States and 16 countries for November’s BFGoodrich Tires SCORE Baja 1000. Registration continues at www.score-international.com for the iconic race that will be held Nov. 12-18 in Baja California, Mexico.

Over 350 entries, from 40 U.S. States and 30 countries are expected to compete in this year’s 50th anniversary celebration of the BFGoodrich Tires SCORE Baja 1000. There are multiple Pro and Sportsman classes for cars, trucks, utvs, motorcycles and quads.

With a total time limit of 48 hours in the elapsed-time race, the motorcycle and quad classes will start at 12 midnight (PT) on Wednesday, Nov. 15 and the car, truck and UTV classes will follow with start on Thursday (Nov. 16) at 10 a.m (PT). This year’s course map is available on the SCORE website at www.SCORE-International.com.

To date after just a week of online registration, there are 121 total very early entries from 28 U.S. States and 17 countries officially signed up to compete. In addition to the United States and host country Mexico, the other countries with racers entered are Australia, Austria, Canada, Chile, England, Finland, France, Germany, India, Israel, Japan, New Zealand, Peru, Puerto Rico and South Africa.

Roeseler has a race-record 13 overall wins in the SCORE Baja 1000, including 10 on a motorcycle, two in a desert race car and one in a SCORE Trophy Truck.

Among the other early entries is legendary veteran Rod Hall who is the only person who has raced in all 49 SCORE Baja 1000 races. Turning 80 on Nov. 22, Hall has a race-record 24 class wins and will be competing again this year in Stock Full with his oldest son Chad Hall as his principal additional driver.

Teams will be allowed to begin pre-running or practicing on the race course starting at 8 a.m. (PT) on Friday, Oct. 20 starting from Ojos Negros as the section from the start to Ojos Negros will be restricted.

SCORE Trophy Truck, the marquee SCORE racing division for high-tech, 900-horsepower, unlimited production trucks class will have a special qualifying session for start positions at 7 p.m. on Tuesday, Oct. 31 on the Off-Road Track at Las Vegas Motor Speedway. The marquee SCORE racing division will be showcased that week (Oct. 30-Nov. 3) at the massive SEMA SCORE Baja 1000 Experience at the SEMA Show at the Las Vegas Convention Center. Both events are presented by BFGoodrich Tires.

As it has for over four decades, SCORE has put together another memorable race course for the 50th anniversary, this one a point-to-point race, with all of the foreboding, unforgiving terrain that both the northern state and southern state of the majestic Baja California peninsula has to offer. SCORE CEO/president Roger Norman and SCORE Race Director Jose A. Grijalva have designed and finalized this year’s race course of 1,134.40 miles. Current plans call for the course to have five checkpoints along the way to the finish.

Starting in the heart of Ensenada in front of the historic Riviera del Pacifico Cultural Center, the course travels east to Ojos Negros before launching its weaving route south to the finish line in La Paz.

The last stretch of the race course travels down by the ‘Waterfall’ before La Paz and at El Centenario and the final pavement section to the finish line adjacent to the Grand Plaza Hotel, the SCORE race headquarters on the outskirts of La Paz.

Pre-race festivities include Tuesday (Nov. 14). For the first time, the vastly popular tech and contingency of all vehicles and the SCORE Manufacturer’s Midway will be held over two days on Boulevard Costero in front of the Riviera del Pacifico Cultural Center.  Contingency will run from 9 a.m. to 5 p.m. and pre-race tech will be held from 9 a.m. to 6 p.m. for motorcycles, quads and UTVs on Tuesday (Nov. 14) and for cars and trucks on Wednesday (Nov. 15).

As the celebration continues Thursday (Nov. 15) night to all day and evening on Friday and on the morning of Saturday (Nov. 18) in La Paz while official finishers cross the line and tales and epic accomplishments are added to the legacy of the event. The post-race awards fiesta will be held in La Paz starting at 7 p.m. (PT) on Saturday (Nov. 18).