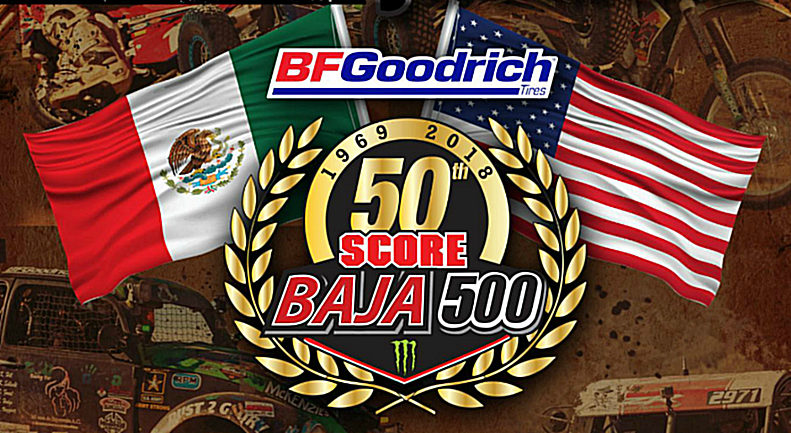 Epic race was second round of the four-race 2018 SCORE World Desert Championship;

With the 321 official starters being a solid eighth-most  and the 187 finishers the fifth-most in the 50-year history of this great race., U.S. racers among the field ranged from Alaska, Hawaii, California, Washington and Oregon in the Pacific West, Nevada, Idaho, Arizona, Utah, Montana, Wyoming, Colorado and New Mexico in the Mountain West, New York, New Jersey, Rhode Island and Connecticut in the Northeast, Illinois, Ohio, South Dakota, Kansas and Texas in the Midwest and Florida, Louisiana, North Carolina, Tennessee and Virginia in the South.

Patience and fortitude along with a trusty steed carried Las Vegas’ iconic Hall of Fame desert racer Rob MacCachren to his second straight overall SCORE win June 2 as he won the golden anniversary celebration of the 50th BFGoodrich Tires SCORE Baja 500 in dynamic fashion by starting first, never losing the physical lead and finishing first in the elapsed-time race.

Starting first and never passed while defeating a strong field of 321 starters including 33 in the marquee racing division for high-tech, 950-horsepower, unlimited custom trucks, MacCachren, 53, drove to victory over a tremendously tough 542.12-mile race course, finishing in his trusty warhorse– No. 11 Rockstar Energy MacCachren Motorsports Ford F-150 (built by Geiser Bros of Phoenix) in a penalty-free 11 hours, 21 minutes, 15 seconds, averaging 47.75 miles per hour.

For MacCachren it was his sixth class win and second overall triumph in the SCORE Baja 500 as he increased his SCORE-record total of career SCORE Trophy Truck race wins to 17. While finishing second three times in this race by less than four minutes total, including a seven-second loss to Las Vegas’ B.J. Baldwin in 2008, MacCachren’s first overall win here came in 1996 when he was racing for the powerful BFGoodrich Tires Rough Riders team in SCORE Trophy Truck.

Improving on his fifth place finish in San Felipe, Ryan Arciero, 44, Lake Forest, Calif., deftly drove himself to the final spot on the podium with a third-place overall and SCORE Trophy Truck finish in his No. 32 Ford F-150 in 11:29:06 while averaging 47.20 mph.

Riding the No. 7x Honda CRF450X, Justin Morgan, 25, El Cajon, Calif. and his three-rider team raced to the overall motorcycle victory for his third overall motorcycle win in this race in the last four years. Repeating their SCORE San Felipe 250 win earlier this year, they crossed the finish line in11:54:58 at an average speed of 45.49mph.

The win was also the 20th overall motorcycle victory for Honda in the SCORE Baja 500.

Pulling off a major upset by winning over a SCORE-record field of 35 starters in Pro UTV FI, 13 starters in Pro UTV and three starters in Pro UTV Unlimited, Kristen Matlock was the overall UTV winner and Pro UTV NA (Normally Aspirated) class winner in the race. Matlock, 37, of Alpine, Calif., drove solo in Pro UTV NA to a winning time of 14:26:47 in a Polaris RZR XP4 1000 for a victory margin of over 31 minutes over the second place finisher among all 51 of the Pro UTVs that started the race.