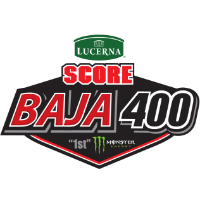 ENSENADA, Baja California, Mexico—Coverage of the four-race 2019 SCORE World Desert Championship continues on ESPN2 TV this Sunday with the first of multiple airings of the Inaugural Lucerna SCORE Baja 400. The one-hour show will be broadcast on the World of X Games show on ESPN2 on Sunday (Oct. 27) at 12 Noon PT and 3 p.m. ET.
Check local listings to confirm the time in your area.
Hosts of the World of X Games shows from the 2019 SCORE World Desert Championship are SCORE champion racers Cameron Steele and Aaron Ampudia.
Co-producing the shows with SCORE is award-winning BCII TV of Los Angeles. Bud Brutsman is the executive producer.
FINAL FLAG
When the final green flag dropped, a total of 189 vehicles left the start line early Saturday morning (Sept. 21) with racers from 25 U.S. States and eight countries. When the course closed and the final checkered flag fell at 3:58 a.m. PT on Sunday (Sept. 22), there were 146 official finishers for an unusually high 77.25 finishing percentage, especially considering the difficulty of the race course. The results were made official following complete data tracking review of the devices on each vehicle in the event late Sunday morning.
START GRID-SCORE BAJA 1000
The results of this race are also determining the start order within each class for November’s iconic season-ending BFGoodrich Tires 52nd SCORE Baja 1000, presented by 4 Wheel Parts.
CHALLENGING COURSE
The race course for the Inaugural Lucerna SCORE Baja 400 was finalized by SCORE President/Race Director Jose A. Grijalva of 390 miles. After the first 19.6 miles which was used in both directions for the race, the course ran in a clockwise direction.
There were three physical checkpoints and 103 virtual checkpoints on the race course along with 13 speed zone areas that total 71.01 miles of the total 390.20 miles. The three physical checkpoints were located at Santa Catarina (race-mile 96.91), Llano Colorado (rm 230.15) and Santo Tomas (rm 321.94).
The historic race course was another memorable example of all that Mexico’s Baja California has to offer, including high-speed dirt trails, sandy, rocky and silty natural terrain, majestic Baja washes and canyons, stretches along the seashore with elevations from sea level to over 3,000 feet. The course was another jewel reflecting the stark beauty of Baja California.
SCORE TROPHY TRUCK WINNER
Ryan Arciero, 46, of Foothill Ranch, Calif., recorded a hard-fought penalty-free winning time 8 hours, 26 minutes and 32 seconds while averaging 46.20 miles per hour in his No. 32 Levi Arciero  Racing Ford F-150 built by Herbst-Smith Fabrication.
After starting the season with a second-place 33rd SCORE San Felipe 250 in April, Arciero, whose family racing roots extend long and deep including his father Frank Arciero Jr who will be inducted to the Off-Road Motorsports Hall of Fame on Nov. 3 in Las Vegas, he had a did not finish in the SCORE Baja 500.
It was Arciero’s fourth career SCORE Trophy Truck race win and first since 2004 when he won the SCORE Baja 500 with Mark Miller.
THE PODIUM
Joining Ryan Arciero on the podium were San Diego’s Andy McMillin, who won the first two races of the 2019 SCORE World Desert Racing Championship and Mexico’s Gustavo ‘Tavo’ Vildosola Jr.
McMillin, 32, who debuted a sparkling new all-wheel drive No. 31 McMillin Racing Chevy Silverado built by Mason Motorsports, finished second with a time of 8:28:09 (46.05mph) and Vildosola Jr, 37, of Mexicali, with a finishing time of 8:28:56 (45.98mph) in his No. 21 Vildosola Racing Ford Raptor (Vildosola) for third place.
MORGAN WINS MOTO OVERALL
Riding the No. 1x Honda CRF450X, Justin Morgan, 27, El Cajon, Calif. and his three-rider team raced to the overall motorcycle victory for his seventh consecutive overall motorcycle win in the SCORE World Desert Championship. The trio crossed the finish line in 8:32:30 with an average speed of 45.66mph.
Morgan split the riding with Mark Samuels, Yucca Valley, Calif. and Ricky Dietrich, of Yucca Valley, Calif.
Morgan rode from the start to race mile 190, Samuels rode from there to El Cambro, and Dietrich from there to about 30 miles from the finish and Morgan rode the final stretch that he drove on the start.
Starting first among the motorcycles and never relinquishing the physical lead, the 1x team held off Mexico’s Santiago Creel and his 66x team by a mere 6.14 seconds in the elapsed time race.
UTV WINNER
Defeating 20 starters in his class and 34 total UTVs to win the overall UTV win title in this year’s race was veteran racer Wes Miller, Henderson, Nev., with a winning time of 10:00:50 in his No. 2975 Polaris RZR XP4 Turbo. He also won his Pro UTV FI (Forced Induction) class and he began his career racing on a quad over 20 years ago.
SCOREscope
2019 REMAINING SCHEDULE