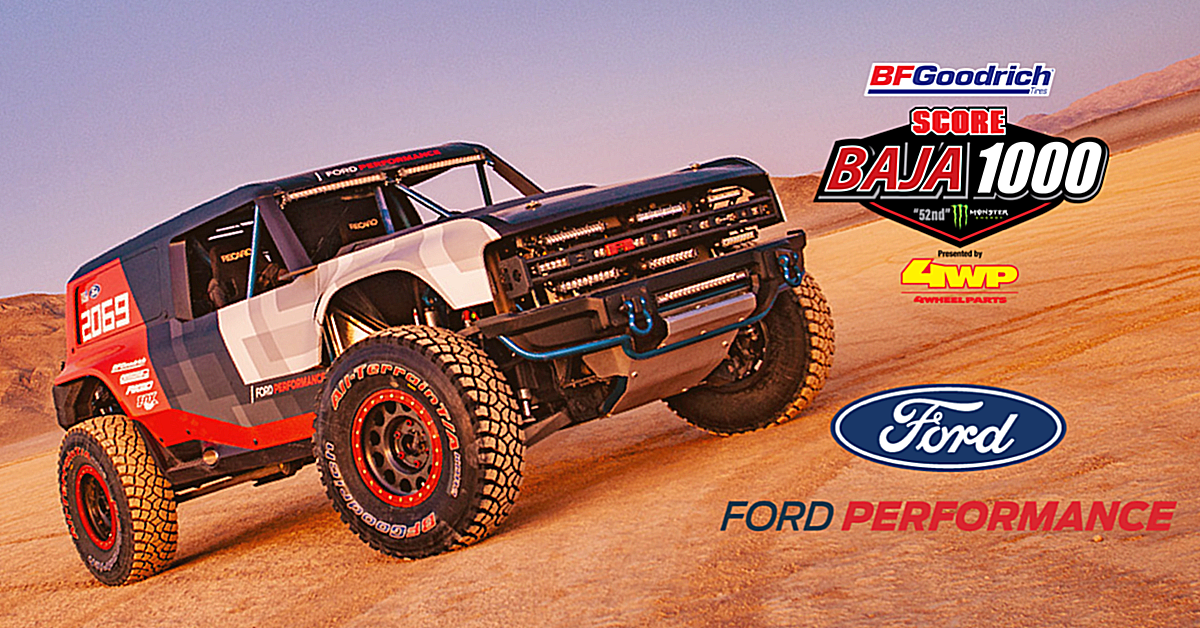 ENSENADA, Mexico—During the lengthy start of the Granddaddy of All Desert Races, SCORE International has announced that Ford  has entered into an agreement through the 2022 SCORE World Desert Championship. Starting with today’s BFGoodrich Tires 52nd SCORE Baja 1000, presented by 4 Wheel Parts, Ford  is the SCORE Official Truck and SUV.
BAJA MIL
The SCORE Baja 1000 endures at the pinnacle of motorsports as the most iconic, oldest, prestigious, toughest and longest continuously held desert race in the world.
This year’s annual renewal of one of the top motorsports events in the world is being held in Mexico’s magnificent northern portion of the Baja California peninsula with racing having started at 3 a.m. PT today for Motorcycles and Quads and 10:30 a.m. PT for cars, trucks and UTVS. The official start/finish line area is adjacent to the Riviera del Pacifico Cultural Center in the heart of Ensenada.
Nearly 275 entries have come from 39 U.S. States and 22 countries.
BRONCO R
As a tribute to the late, great, legendary Rod Hall and his overall win with Larry Minor in the 1969 Mexican 1000 in a 4X4 Ford Bronco, Ford Performance is teasing its launch of the new Ford Bronco next year by racing the purpose-built Bronco R race prototype into this year’s race.
The Bronco R—developed by Ford Performance in collaboration with builder Geiser Brothers and 2018 SCORE Baja 1000 4-wheel champion Cameron Steele—drops heritage-inspired design and proportion hints of what enthusiasts can expect to see when the future Bronco makes its world premier next spring.
SCORE COMMENTS
“SCORE is especially pleased to have entered into this multi-year agreement with Ford,” commented Jim Ryan, SCORE Marketing and Sales Director. “Ford has a long and storied history in SCORE racing and this agreement will provide SCORE with a tremendous sponsor partner as our Official Truck and SUV.”
“Further, having their Ford Bronco R racing prototype in this year’s SCORE Baja 1000 is an extremely viable way to launch this long-term sponsorship. We welcome Ford to our wonderful SCORE sponsor family and look forward to expanding our mutually beneficial relationship.”
FORD PERFORMANCE COMMENTS
“Working with SCORE just makes great sense, especially with some of the Ford trucks and SUVs coming down the pike, starting with the reveal of the new Bronco next Spring,” said Mark Rushbrook, global director of Ford Performance Motorsports. “Vehicles like Raptor and the all-new Bronco were built to live in the sand of Baja.”
BRONCO R ENTRY
The Bronco R is entered in Class 2 at the SCORE Baja 1000, and carries the vehicle number of 2069 to honor the class but more importantly the year that Hall and Minor became the only 4-Wheel drive vehicle to win the overall in the world’s most prestigious desert race.
Veteran Hall of Fame SCORE Trophy Truck racer Cameron Steele is the driver of record in memory of Rod Hall in the No. 2069 and Rod Hall’s granddaughter Shelby Hall is one of the additional drivers for a portion of the course. An experienced desert racer, Shelby Hall drove several times with Rod Hall in the race he loved so much that he competed in it for 50 consecutive years.
Other drivers for this special vehicle are SCORE Trophy Truck champion Curt LeDuc, legendary SCORE Baja motorcycle champion Johnny Campbell, champion desert racer Steve Olliges, and multi-time rock crawling and SCORE Baja 1000 class champion Brad Lovell.
SCOREscope
2020 SCHEDULE
Here is the four-race 2020 SCORE World Desert Championship and for the fifth consecutive year all races will be held in Baja California, Mexico: