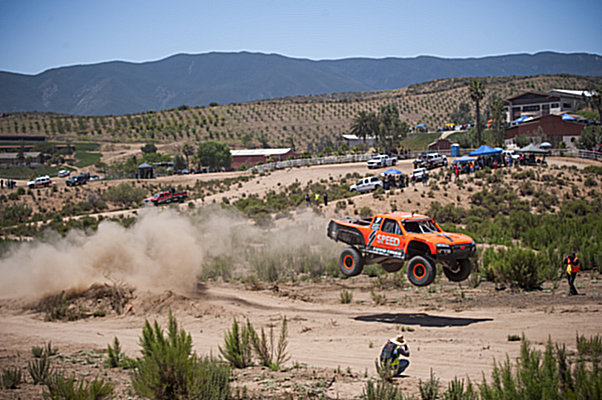 Teams from all across the United States and around the world continue to register online for the Round 2 of the four-race 2017 SCORE World Desert Championship. The massive international racing extravaganza will be held May 31-June 4 in Mexico’s Baja California Norte, starting and finishing in Ensenada, the seaside port on the Pacific Ocean, 80 miles south of San Diego.

It is an elapsed-time race with staggered starts as the green flag will drop first on Saturday (June 3) for the motorcycles and quads at 5:30 a.m. (PDT) and approximately 10 a.m. (PDT) for the cars, trucks and UTVs.

In addition to 25 U.S. States, racers from Australia, Austria, Canada, Denmark, Germany, Great Britain, Japan, Mexico and the Netherlands are already part of the field that is expected to grow to nearly 300 vehicles at the start line.

Robby Gordon, a former NASCAR Cup team owner/driver leads the group of former overall winners among the early entries in this year’s SCORE Baja 500 with four wins. All of the returning winners race in the marquee SCORE Trophy Truck division for high-tech, 850-horsepower, unlimited production trucks.

With one overall win each are Las Vegas’ MacCachren (1996), San Diego’s Andy McMillin (2010) and Mexico’s Lopez (2015). MacCachren won the season-opening SCORE San Felipe on April 1 and he has won the last three straight SCORE Baja 1000 races. McMillin is a third-generation desert racer who earned his overall racing with his father Scott McMillin and Lopez, a second-generation desert racer who is part of the five-vehicle RPM Racing team of Bristol, Tenn., is the reigning two-time SCORE Trophy Truck season point champion.

Also among early entries are three family entries. Andrew Myers and his brothers Steve and Dan of Escondido, Calif., will split time driving in the Trophy Truck Spec class while racing in Class 10 will be the father and son team of Todd and Matt Winslow of Clovis, Calif. Both former class champions, Shelby Reid will race in Class 1 while her son Cody Reid, both of Apple Valley, Calif., will be driving in Class 10.

Among a large field of nearly  20 entries so far in Pro UTV FI (Forced Induction), Marc Burnett, Lakeside Calif., is also among the early entries.

Attempting a feat never accomplished before in the long history of SCORE, one racer is entered as rider of record in three different motorcycle classes hoping for at least to finish in each class. Coming from Mexico City is internal motorcycle rally racer Santiago Creel who will be rider of record on different KTM motorcycles in the Pro Moto Unlimited, Pro Moto 30 and Pro Moto Limited classes.

Official practice, or pre-running, on the official race course for this year’s SCORE Baja 500 will begin on Saturday, May 20. Pre-running will start at race-mile 38 outbound only and will end at rm476.