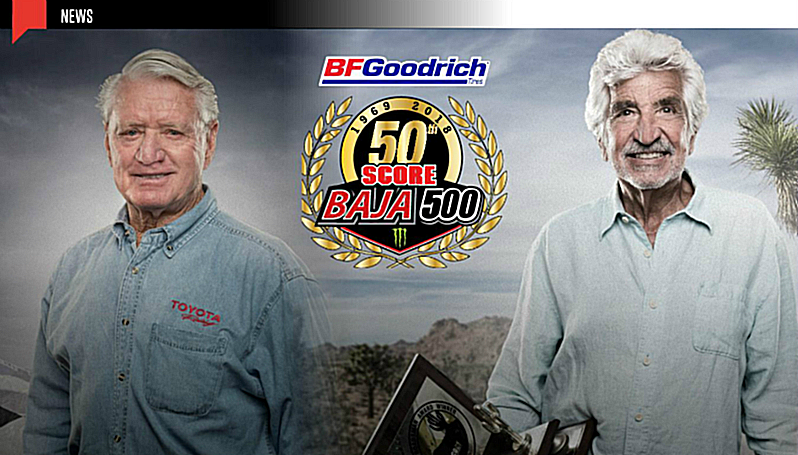 Fish, the ‘godfather’ of desert racing who ran SCORE from its Baja start in 1974 for 38 years through the end of the 2012 season joins the Iconic ‘Ironman’ Stewart  to share duties for the special golden anniversary race that they both have been such a major part of over the years.

Fish, who will turn 79 on May 2 and Stewart who will turn 73 on June 4, will both be active parts of the celebration of the popular early summer race when it is held this year from May 30-June 3 in Ensenada, Baja California, Mexico. The race will be Round 2 of the internationally-televised four-race 2018 SCORE World Desert Championship.

The SCORE Baja 500 is one of the top motorsports events in the world. It was started originally in 1969 by the NORRA organization. Mickey Thompson and his SCORE International organization were invited by the Mexican government to take over the event in 1974. Sal Fish ran and later owned and produced the SCORE Baja 500 for 38 years until he sold SCORE to Roger and Elise Norman in December of 2012.

BFGoodrich Tires, the SCORE official tire for over 40 years, has also posted a $25,000 contingency bonus for the overall winner of the golden anniversary race.

Fish developed TV coverage of the old SCORE Off-Road World Championships at the old Riverside International Speedway and created a number of highlights that made it a unique spectator event including creating the concept of “heavy metal” and “mini metal” divisions.

The marquee SCORE Trophy-Truck division, for high-tech unlimited production trucks with upwards of 900 horsepower, was another innovation when Fish introduced the division in 1994.

The rewards of the SCORE position were varied. Hanging in his Malibu home-office is the copy of a resolution introduced in the California State Assembly by Assemblyman Richard Katz of the 39th District. The assembly honored Fish for “contribution to the sport of international off-road racing” and commended him for “his exemplary record of public service.”

Ever the visionary, Fish secured the Laughlin (Nevada) Tourism Council, in association with the Las Vegas Convention & Visitors Authority and Las Vegas Events, as the title sponsor of the SCORE Laughlin Desert Challenge, held from 1995 through 2012. He also brought the LVCVA and LVE to SCORE for the annual SCORE Terrible’s Primm 300, which started in 1996 and ran through 2009.

Fish also produced the monumental once-in-lifetime Tecate SCORE Baja 2000 to help commemorate the advent of the new millennium in the year 2000, running the legendary race down the length of the Baja California peninsula in Mexico–from Ensenada to Cabo San Lucas.

In 2007, Fish produced the monumental 40th anniversary of the Tecate SCORE Baja 1000. Festivities began in Tijuana, the actual start was in Ensenada, Baja California, and it finished in Cabo San Lucas, Baja California Sur.

Fish was honored in December 2003, receiving the inaugural BFGoodrich Tires Motorsports Person of the Year award for his many contributions to the world of motorsports.

A feature-length documentary, directed by Dana Brown, called ‘Dust To Glory’, was produced in association with SCORE International. Released in April, 2005, it was a tribute to the legendary Tecate SCORE Baja 1000.

SCORE is also honored to have Stewart, the legendary desert racer known by his legions of fans as the ‘Ironman’, as the co-Grand Marshal of this year’s race with Fish.