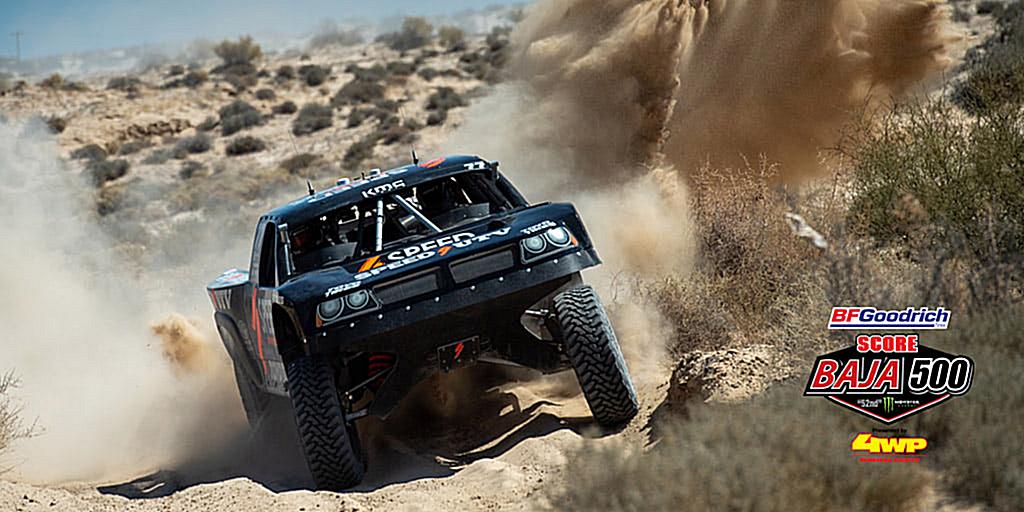 SAN FELIPE, Baja California, Mexico – Two second-generation and one third-generation desert racers are the top three qualifiers for Saturday’s BFGoodrich Tires 52nd SCORE Baja 500, presented by 4 Wheel Parts, is being held this week in San Felipe, Baja California, Mexico.
Former IndyCar driver/NASCAR driver/NASCAR team owner/Off-Road Motorsports Hall of Fame inductee (2019) Robby Gordon qualified first Wednesday morning for Saturday’s race, followed closely by third-generation superstar Luke McMillin in second and former NASCAR racer/second generation desert racer Justin Lofton as the third fastest qualifier.
Held over a 3.47-mile course south of downtown San Felipe, Gordon, 51 a SoCal native who still lives in Charlotte, N.C. powered his way in a time of three minutes, 57.229 seconds averaging 51.65 miles per hour in his new No. 77 all-wheel drive custom-built Chevy SCORE Trophy Truck. Gordon was the only qualifier who covered the course in under four minutes.
San Diego’s Luke McMillin, 27, whose older brother Dan McMillin, 32, finished fourth in qualifying, completed the qualifying course in 4:00.937 (51.00mph) in his No. 83 Mark Racing Racer-Built Ford F-150.
Back in his desert racing roots, Lofton, 34, of Brawley, Calif., was timed in 4:05.489 (in his No. 41 Lofton Racing Jimco-built Ford Raptor.
Fastest qualifier in Class 1 was Broc Dickerson, 19, Calif., turning in a hot lap of 4:22.020 while averaging 46.72 mph in the No. 123 Ford-powered Jimco open-wheel desert race car.
Top qualifier in the Trophy Truck Spec class was Clay Lawrence, Banning, Calif., with a time of 5:40.00 (42.23 mph) in the No. 285 LMS-Chevy.
The five trucks in the SCORE TT Legend class for SCORE Trophy Truck drivers over 50 years old all elected not to qualify. Reigning SCORE World Desert Championship point champion team of Clyde Stacy, 75, Bristol, Va. and Nick Vanderwey, 53, Phoenix, in the No. 1L RPM Racing Geiser-Built Chevy V16 will be the first vehicle off the line in their class.
BACK TO BAJA
With significant Biosecurity Protocols established, approved and in place including no spectators for the contingency, start and finish line area, SCORE International is holding its first SCORE Baja race since last November.
After a 10-month absence, this will be the first SCORE race of 2020 and first in Baja since last November’s SCORE Baja 1000.
San Felipe is the peaceful village on the Sea of Cortez, 125 miles south of the U.S. Border at Calexico, Calif. Both 2020 SCORE races will be held on Mexico’s magnificent Baja California peninsula for the fifth consecutive year.
THE SHOW
Competition includes classes for cars, trucks UTVs, motorcycles and quads for the internationally-televised BFGoodrich Tires 52nd SCORE Baja 500, presented by 4 Wheel Parts.
Many of the world’s best desert racers are in action at this year’s celebration of one of the top 10 motorsports events in the entire world. The race will be televised on a delayed basis as a one-hour special on the ABC Network World of X Games programming and syndicated internationally to as many as 25 countries. The shows are produced by SCORE in association with prominent SoCal company BCII TV.
It is an elapsed-time race with staggered starts as the green flag on Saturday will drop first for the motorcycles and quads at 3 a.m. PT and approximately 7 a.m. PT for the cars, trucks and UTVs.
Nearly 150 vehicles are expected at the start line. Long-time SCORE sponsor and race title sponsor BFGoodrich Tires has also posted a US$25,000 contingency bonus for the overall 4-wheel winner to help commemorate this year’s race.
EL DORADO RANCH S/F
Following planning with and approval from city and state governments, SCORE International has announced that all the official pre-race activities and the start/finish line compound for this year’s SCORE Baja 500 will be held in a restricted area at the prominent El Dorado Ranch resort with no spectators allowed.
HEALTH & SAFETY
Because of the significant health and safety Biosecurity protocols developed by SCORE in conjunction with and the approval of state and local health authorities as a result of the COVID-19 pandemic, all race-week festivities and the start/finish line compound will be restricted access only and closed to the general public.
Spectators following health and safety protocols will be allowed in the open areas around the 493.00-mile race course.
LIVE STREAMING
On the two days of contingency Thursday and Friday and during the race on Saturday until the course closes on Sunday morning, there will be extensive live streaming from the start/finish line compound broadcasting race activities and start and finish line interviews.
Popular Rat Sult will again serve as primary host of the SCORE live streaming, assisting will be Karolina Hirales.
With no spectators allowed in the start/finish line compound, all of the week’s activities (qualifying, contingency, start line and finish line) will be streamed both live and same-day including the race, airing via the internet on the SCORE website and social media platforms.
DETAILS
As required by the health and safety Biosecurity protocols required to conduct this race, race week activities will have restricted access at the Eldorado Ranch with no spectators allowed for contingency, tech inspection and the start/finish compound.
On-site Racer Registration and Media Registration, again with restricted access, will continue on Wednesday, Thursday and Friday at the Pavilion at El Dorado Ranch.
Racer registration will be held on Thursday from 8 a.m. to 5 p.m. PT and from 8 a.m. to 4 p.m. on Friday with no new entries accepted after 3 p.m. PT on that final day of registration.
SCORE Media registration will continue in the Pavilion at El Dorado Ranch from 9 a.m. to 5 p.m. PT on both Thursday and Friday.
For more information regarding SCORE, visit the official website of the SCORE World Desert Championship at www.SCOREInternational.com.#scorebaja500.

SCORE TROPHY TRUCK
ROBBY GORDON, No. 77 (Gordon qualified first.) –That was a fun course, I have to be honest. Very technical, it wasn’t about the big bumps or who was crazy to the big bumps, it was very, very technical. I think it was good for our truck. Obviously, we’ll see what the time is, but I’m glad they did qualifying. Qualifying means a lot. I know it’s a lot of work for the series to do that, but the luck of the draw is just not the right way to go racing, so wherever we’re at, we’re going to be happy with and looking forward to the race.

LUKE McMILLIN, No. 83 (McMillian qualified second.) –It went really well. There is very soft sand out there, just like the washes, which is cool. I had a lot of fun. With this being the qualifier for the SCORE Baja 1000, the race that it is, you just don’t want to make a mistake. Qualifying well won’t win you the race, so we are trying not to make many mistakes and to run conservatively. I think it was a good run, I think it will put us in the top five and that’s a great starting spot. I’ve checked up the course, we’ve been pre-running it for a couple of days. We’re not doing quite as much pre-running as usual, we’re limited on our time down here, but the course is going to be brutal. It feels like SCORE San Felipe 250, but it’s SCORE Baja 500. When you think about it, it’s 500 miles just in the desert and I don’t know if we ever had a course so rough and rocky and just pure desert for 500 miles, so I think attrition is going to be a big, big factor in this race. With the fewer amount of entries, the key is just to keep moving all day.

JUSTIN LOFTON, No. 41 (Lofton qualified third.) — I wish I could say it was a little better than it was. Basically this is our truck from a year ago, from the SCORE Baja 500, it’s been torn apart since then. We modified some things and tried to make it a little better and I’m still getting used to it. We have some suspension tuning to do, but nothing that Fox Shocks can’t handle and I’m looking forward to 500 miles of fun.

DAN McMILLIN, No. 23 (McMillin qualified fourth.) — Qualifying went well. I got a little sloppy right off the start into the first wash, but from there we just pushed as hard as I could, it’s pretty soft here, but the truck was hooking up better than I thought. I felt good, I didn’t really make any mistakes, kept on the road and drove it fast and hard and I think we’re going to be on a good spot for Saturday.

ALAN AMPUDIA, No. 10 (Ampudia qualified sixth.) — A lot of things happened. Off the bat I miscalculated a big hole and kicked us off the course, so we lost a lot of time there. I don’t know, I think it’s just me not driving the car in a long time, since basically the SCORE Baja 1000 last year, so it’s been a while since I’ve been behind the wheel. I blew a couple of turns and at the end after we came to the finish I hit the brakes and there was no oil pressure. We don’t know what happened, hopefully we didn’t blow an engine or something like that, hopefully it’s something minor and we’ll be getting ready for Saturday. We weren’t trying to win the pool, we wanted to be like top five. If we can get the truck fixed by Saturday, then it’s just going to be hunting them and staying in the lead pack and hopefully at the end we can make some moves and be up front to start at the SCORE Baja 1000 up front.

PAT DEAN, No. 19 (DOR – Tim Herbst qualified seventh.) — The truck was pretty good, the track was just tough, there was a lot of silty and corners which were very difficult. We got through it, I think we did OK, but the truck was great. The race will be very different. There’s just solid, silty, I think the track is going to be pretty fun, pretty fast while qualification was really technical, very tough push on. But I think between me and my teammate and owner Tim Herbst we’ll be just fine.

LARRY ROESELER, No. 43 (Roeseler qualified ninth.) — Our plan was just to put in a nice, solid run. I really had very little time in the truck test-wise, so it was a really fun track. My hat goes off to SCORE for having it. There were a lot of spectators up on the hills and I wasn’t really expecting to see so many people, so that was fun. The Baja Jerky SCORE Trophy Truck worked really well and I’m really looking forward to the race. 500 miles on this desert is going to take a toll on a lot of trucks, so just a good, solid run here, we made a couple little adjustments and we’re ready to go, we’re rock solid.