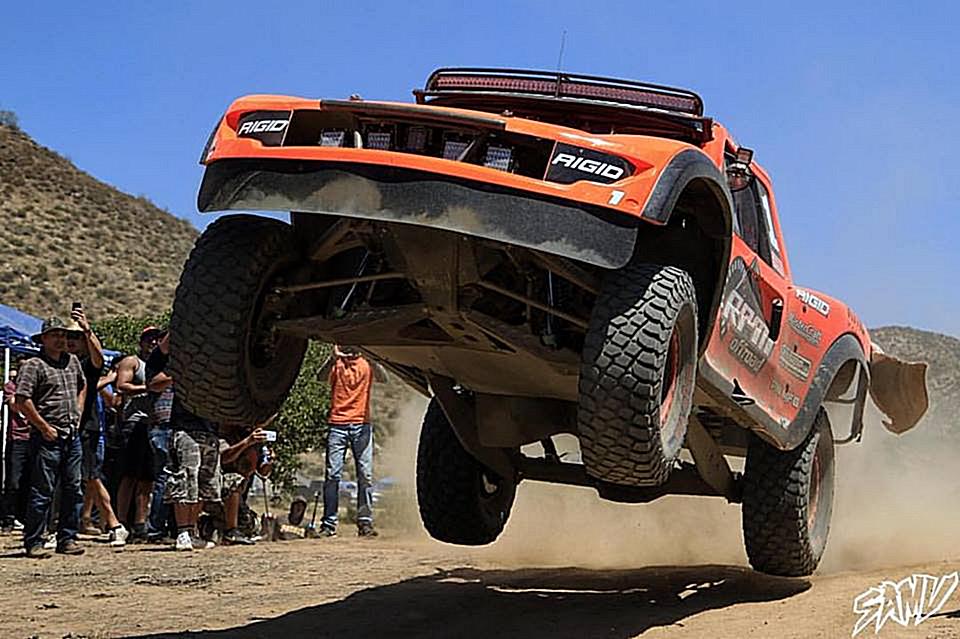 All in Baja California, Mexico

SCORE International celebrated its 44th year as the World’s Foremost Desert Racing Organization in 2017 with even greater expectations anticipated in 2018 for SCORE’s 45th desert racing season that will include the 50th BFGoodrich Tires SCORE Baja 500 in Ensenada, Baja California, Mexico.

In four races on the 2017 schedule, there were a total of 965 starters in cars, trucks, UTVs, motorcycles and quads for an average of 241.25 starters per race. Competitors came from 45 U.S. States, the District of Columbia, U.S. Territories Guam and Puerto Rico along with 32 total countries from Finland and Great Britain to China, Japan, Australia and New Zealand and from Canada to Brazil and Argentina.

There were also just over 1,100 total news media personnel from 12 countries credentialed for the four events on the 2017 SCORE World Desert Championship schedule.

Over 10,000 team members were part of the SCORE Baja 1000 and Mexico tourism officials announced estimated attendance for the four SCORE Baja races as over 700,000.

“People only dream about a spectacular season like SCORE had in 2017 and we were honored and humbled to be a part of it,” commented Roger Norman, SCORE CEO/President since he and his wife Elise Norman, SCORE Vice-President, purchased the company on Dec. 20, 2012. “This year was a tribute to the talent and grit of SCORE desert racers who were provided a remarkable platform to perform by SCORE’s dedicated, creative and hard-working team of staff and volunteers.”

“When we remember 2017, we must also salute the remarkable premiere of the inspirational Dust 2 Glory theatrical action sports documentary developed by Dana Brown. Looking back, 2017 will always be viewed as a significant landmark in the legendary history of SCORE International. “

“As superlative as 2017 was, 2018 will be even more spectacular as we plan, organize and produce four memorable SCORE Baja races, spotlighted by the 50th anniversary running of the BFGoodrich Tires SCORE Baja 500 when it is held (May 30-June 3).”

A night of champions will be held on Saturday, Jan. 13, 2018 at the San Diego Air and Space Museum in Balboa Park. The evening will salute the champions of the 2017 SCORE World Desert Championship as well as honoring the 2017 SCORE Off-Roadsman of the Year award winners and recognizing the 31 winners of the 2017 SCORE Milestone awards given to racers who completed all 2,057.97 dusty, crusty, challenging, grueling and unforgiving SCORE Baja desert racing miles of the four-race season.

Doors will open at 5:30 p.m. PT for free museum tours, with a cocktail reception starting at 6 p.m. PT, followed by dinner at 7 p.m. PT and the awards at 7:30 p.m. PT. The awards will be streamed live around the world on the Internet through the SCORE Live platform on the SCORE website. Tickets are on sale at 2017 SCORE Awards Night Tickets here.

Closing the books on 2017 on New Year’s Eve, here’s a brief look back on the four SCORE Baja races that comprised the 2017 SCORE World Desert Championship.

Returning after a one-year absence to a race he relishes so much, Las Vegas’ Hall of Famer Rob MaCachren, 52, masterfully and methodically manipulated and succinctly stormed his way past the competition and through the relentless desert race course to the overall and SCORE Trophy Truck victory at the 31st annual SCORE San Felipe 250.

Round 2 of the four-race 2017 SCORE World Desert Championship was held in Mexico’s Baja California Norte, starting and finishing in Ensenada, the seaside port on the Pacific Ocean, 80 miles south of San Diego.

Defeating a field of 233 starters including 33 in the marquee racing division for high-tech, 900-horsepower, unlimited production trucks, McMillin, 30, drove to victory over a tremendously tough 513.76-mile race course, finishing in the No. 31 McMillin Ford F-150 in 10 hours, three minutes, four seconds, averaging 51.12 miles per hour.

After qualifying fifth two days prior to the race, McMillin quickly drove to the front of the voracious pack of world class drivers, earning a victory margin of three minutes, 32 seconds over Justin Matney, Bristol, Tenn., who finished second overall in 10:06:36 at 50.83 mph in the No. 4 RPM Racing Chevy Rally Truck.

A pulsating prelude to the spectacular season-ending 50th anniversary of the iconic BFGoodrich Tires SCORE Baja 1000 in November, RPM Racing’s Josh Daniel played it straight and consistent to win the overall and SCORE Trophy Truck title at the internationally-televised Tijuana 21st SCORE Desert Challenge. Round 3 of the four-race SCORE World Desert Championship, was a three-day, split-format race.

Having held over 150 races in Mexico in the last 444 years, this was the first time that SCORE has held a race that has both started and finished in Tijuana.

With entries from 15 U.S. States and 14 countries, the majority of the cars, trucks, UTVs, finished their race on Sunday (Sept. 24) after running the first half on Saturday (Sept. 23). Motorcycles, quads and a few car/truck classes raced on Friday in two sessions to open the event.

As a substitute driver for driver of record Justin Matney, co-owner of RPM Racing of Bristol, Tenn., Daniel started fourth in the first half of the elapsed-time race to hold off his teammates to hold the overall lead he earned in Saturday’s first half to earn his first career SCORE Trophy Truck victory. Driving in the No. 4 Geiser Bros-built 4-wheel drive Chevy Rally truck, Daniel, of Vista, Calif., covered the six 23-mile laps (138 miles total in a time of 1 hours, 38 minutes, and 16 seconds to pace the field of 124 starters .

Growing into the most powerful racing team in the desert, RPM drivers swept the SCORE Trophy Truck division and a fourth driver won the SCORE TT Legend class.

The unique-format race was held at a spectator-friendly start/finish line and ‘hot pit’ area located on the southeast outskirts of Tijuana to the east of the popular Rancho Casian area.

The season-finale of the four-race 2017 SCORE Desert World Championship saw 404 official starters and 237 official finishers in the history-making race.

It also marked the 29th overall 4-wheel victory in the last 32 years for long-time SCORE sponsor BFGoodrich Tires who added a special Golden statue to their dynamic resume. BFGoodrich Tires also presented Lopez with a special record-contingency bonus of US$50,000 to honor his golden anniversary race victory driving on BFGoodrich Tires, a desert-racing staple for over 40 years.

From award-winning documentary filmmaker Dana Brown, ‘Dust 2 Glory,’ premiered successfully on over 550 screens in the United States on Dec. 6, 2017.

The four-race 2017 SCORE World Desert Championship in Baja California, Mexico along with the SEMA SCORE Baja 1000 Experience/SCORE Baja 1000 Qualifying in Las Vegas are all airing on El Rey Network in the United States. International distribution is by way of syndication. The season-ending 50th BFGoodrich Tires SCORE Baja 1000 will have a two-hour show produced while the other race shows are each one-hour telecasts. The Las Vegas event will air at 2 p.m. PT on Monday, Jan. 1, 2018 and the race show will air at 2 p.m. PT on Sunday, Jan. 14, 2018.