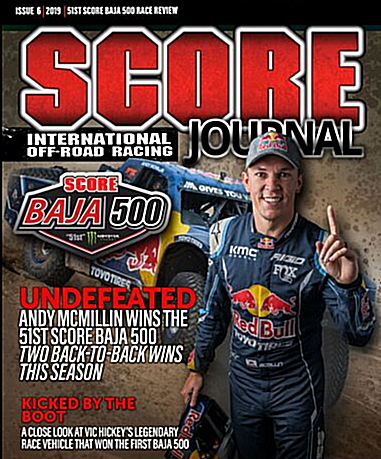 ENSENADA, Baja California, Mexico —Nearly 50 pages of coverage in text, images and video reviewing this month’s 51st annual SCORE Baja 500 along with several breakout pieces from top winners in the iconic race and a pictorial review of the iconic Baja Boot open-wheel desert race car are bathed in the spotlight this month in Vol. 5, No. 6 of the highly-acclaimed SCORE Journal digital online magazine.
Full of interactive news and feature stories, the issue is now live on the SCORE website at www.SCOREInternational.com and is available through SCORE social media channels as well as a direct link at http://read.uberflip.com/t/183537-score-journal. 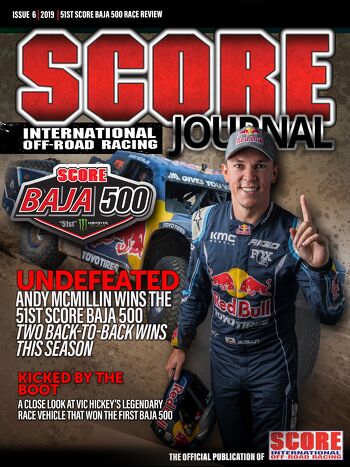 In addition to the huge review section on the Round 2 of the four-race 2019 SCORE World Desert Championship, the coverage includes amazing photos and great videos part of the look at many of class winners who are helping maintain the legacy of SCORE Baja racing. The issue also includes several SCORE News items, lots of new products and a very special pictorial feature one of the legendary desert racing vehicles in SCORE Baja racing history.
WELCOME
“Our June SCORE Journal takes a colorful, in-depth and very thorough and detailed look at the recent SCORE Baja 500, one of the top 10 motorsports events in the world,” commented Jim Ryan, SCORE Marketing and Sales Director and publisher of the SCORE Journal. “This issue also features a picture-perfect look at the 1967 Baja Boot, the amazing race vehicle that won the inaugural 1969 Baja 500. You will see this amazing race vehicle in its original glory in the pages of this issue.”
“We have also compiled another guide showcasing the latest products that can help increase involvement off the road in our off-road marketplace section.”
CLIMBING HIGHER
The SCORE Journal digital magazine, reaching an average of nearly 2 million unique viewers per issue with an average engagement time of over 31 minutes is a major element in the continuing media expansion that SCORE has implemented. The continually revamped SCORE website also generates an average of over 2 million monthly unique viewers.
SPECIAL NUMBERS
The SCORE Journal digital magazine’s November 2018 (SCORE Baja 1000) issue delivered a record 2.8 million unique viewers/readers. The Spanish version of that SCORE Journal issue recorded 224,628 unique viewers/readers.
The SCORE website for the week of the 51st SCORE Baja 1000 in November of last year had a very strong 1.2 million unique viewers.
Helped by the SCORE live streaming format, The SCORE San Felipe 250 recorded 1,155,904 unique visitors to the SCORE website during race week.
And the SCORE Journal’s March 33rd SCORE San Felipe 250 preview issue was viewed by 1,810,444 unique viewers and our Spanish language edition of the SJ generated over 190,000 unique viewers!
INSIDE VOL. 5, NO. 6
Vol. 5, No. 6 of the SCORE Journal is once again filled with numerous interesting worth-reading features, stories, captivating images, exciting videos and several news items.
This edition is anchored around an exciting detailed review at the 51st anniversary of the legendary SCORE Baja 500 including a look at several racers who won their classes. The special section also includes the official finisher’s list from the rugged 485.02-mile race course as well as the updated season point standings for the 2019 SCORE World Desert Championship.
This issue also has the images from an exclusive photo shoot of one of the most iconic race vehicles ever designed for Baja racing—The Baja Boot. After being built by Vic Hickey, owned by Steve McQueen, in museums and in private collections on the East Coast for years, the vehicle and its history are being rediscovered with a modern version scheduled to be release at the end of this year. The Baja Boot, with an Oldsmobile engine was the overall winner of the inaugural 1969 Baja 500 when it was driven by Bud Ekins and Guy Jones.
The Off-Road Marketplace in this issue continues to shine brightly on the latest new products for racers and enthusiasts.
SCORE JOURNAL
The SCORE Journal, launched in 2015, is published as 12 monthly online digital magazines, which includes four print editions that are available as the SCORE race programs at the four events that comprise the SCORE World Desert Championship along with another print edition for the annual SCORE Awards Night.
The SCORE Journal Monthly Digital Magazine features exclusive editorial, enhanced race action videos, expanded and interactive race coverage, interactive product reviews, insider interviews with drivers, tech stories, driver and team profiles, race narratives and analysis, exclusive long and short form video programming, race results, updated stats, studio photography, class overviews, unmatched access to SCORE’s historical archives and much, much more.
EN ESPANOL!
The SCORE Journal features a Spanish language edition of the magazine on the SCORE website. Spanish-speaking individuals represent nearly 20% of the SCORE Journal unique reader base. The link may be viewed on the menu of the SCORE Journal Magazine tab on the SCORE Website. The Spanish language version of the SCORE Journal will be posted within the week of the English version.
SCOREscope
2019 SCHEDULE
Here is the four-race 2019 SCORE World Desert Championship and for the fourth consecutive year all races are being held in Baja California, Mexico: