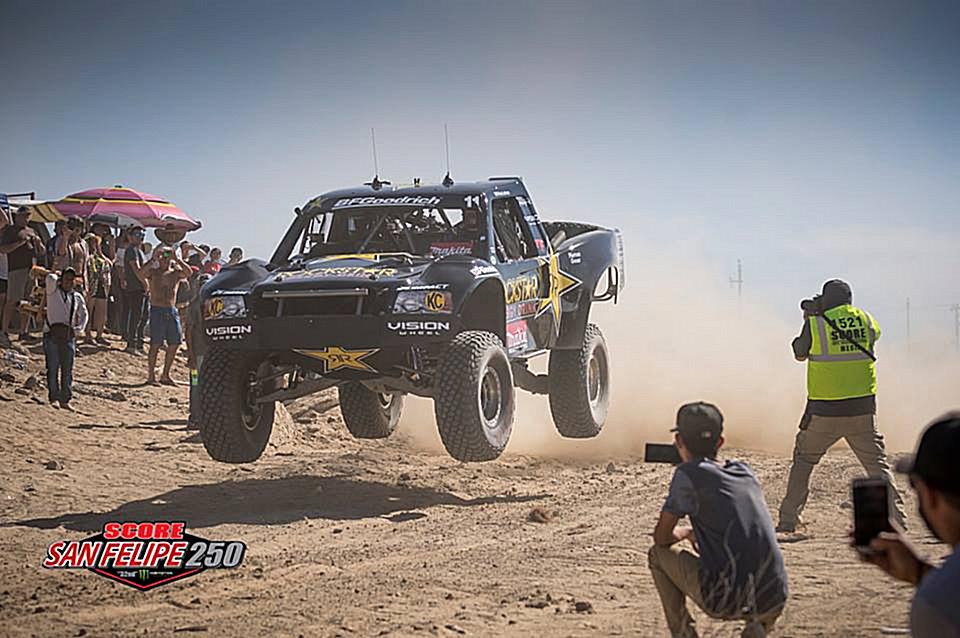 after Round 1 of 2018 SCORE World Desert Championship

ENSENADA, Baja California, Mexico—Following yet another impressive race victory, Off-Road Motorsports Hall of Famer Rob MacCachren of Las Vegas has assumed the overall and SCORE Trophy Truck lead in the season point standings after Round 1 of the four-race 2018 SCORE World Desert Championship.

MacCachren, 53, overcame a race-record 36 starters in the class for high-tech, 900 horsepower unlimited custom trucks for the victory in his No. 11 Rockstar MacCachren Motorsports Ford F-250 SCORE Trophy Truck built by Geiser Bros. of Phoenix.

Starting the 45th-year in the history of the World’s Foremost Desert Racing Organization, MacCachren earned 102 season points with his San Felipe win to lead the 2018 SCORE Overall point standings in addition to topping the chart in the marquee SCORE Trophy Truck division.

The SCORE Baja 500 is one of the top 10 motorsports events held annually in the world. It was started originally in 1969 and ran by the NORRA organization through 1972. In 1973 the Baja Sports Committee of local tourism officials produced the race.

Mickey Thompson and his SCORE International organization were invited by the Mexican government to take over the event in 1974. Sal Fish ran and later owned and produced the SCORE Baja 500 for 39 years until he sold SCORE to Roger and Elise Norman in December of 2012.

While MacCachren is at the top of the SCORE leader board, second in overall points and second in SCORE Trophy Truck standings after his runner-up finish in San Felipe with 96 points in the No. 16 Monster Energy Desert Assassins Geiser-built Chevy Silverado of action sports TV commentator and SCORE racing veteran Cameron Steele, 50, of San Clemente, Calif.

Third overall and leading the Pro UTV FI (Forced Induction) class after his second straight victory in the SCORE San Felipe 250 is veteran Wayne Matlock, 40, of Alpine, Calif., with 93 points in his No. 2971 Polaris RZR XP4 Turbo vehicle.

SCORE point regulations for 2018 once again has all four-races counting for final points, with three minimum, and one of the four races in the SCORE World Desert Championship that is mandatory to qualify for a class season point championship is for the driver/rider of record to start or finish the season-ending SCORE Baja 1000.

SCORE points are calculated on a set amount of start points and finish points for each race along with a variable amount for placement points for finishers based on the number of starters within the racer’s class.

Lining up behind MacCachren and Steele in the point standings in the featured SCORE Trophy Truck division are more of the world’s top desert racers.

Fifth in SCORE Trophy Truck points and tied for eighth in the overall point standings with 87 points is Ryan Arciero, 44, of Lake Forest, Calif., in the No. 32 Herbst/Smith-built Ford F-150.

Back racing with SCORE after an absence of several years, Adam Householder, 33, Yorba Linda, Calif., is seventh with 85 points in SCORE Trophy Truck and 11th overall in the No. 24 Herbst/Smith-Built Ford F-150.

Brothers Alan Ampudia, 27 and Aaron Ampudia, 25, of Ensenada, Mexico, are eighth in SCORE Trophy Trucks and 12th overall with 84 points in their No. 10 Papa’s Y Beer ID-built Ford Raptor.

Including MacCachren in SCORE Trophy Truck and Wayne Matlock in Pro UTV FI, a total of six classes have at least one racer in the top 22 SCORE Overall 4-wheel point standings after Round 1 in the 2018 SCORE World Desert Championship.

Besides SCORE Trophy Truck and Pro UTV FI, other 2018 class point leaders also in the top 22 in the 2018 SCORE Overall points are Chase Warren, Phoenix, tied for fifth overall and Class 10 leader in the No. 1008 Alumi Craft-Chevy with 89 points, William Hedrick Jr, Vicente Guerrero, Mexico who is seventh overall and Trophy Truck Spec class leader with 88 points in the No. 295 ID-Chevy, Justin Davis, Chino Hills, Calif., who is tied for 13th overall and leads the unlimited Class 1 with 83 points in his No. 185 Jimco-Chevy and third-generation racer Bruce Yee, Chula Vista, Calif. who is tied for 19th overall and leads Class 1/2-1600 in the No. 1614 Barajas-VW with 81 points.

The 2018 SCORE Overall Motorcycle and Pro Moto Ironman class point leader after San Felipe is Mexican motorcycle racing legend Francisco Septien, 42, of Ensenada with 82 points as he defeated a race-high moto class field of 12 starters in the solo rider class on his No. 730x Honda CRF450X.

There are many who say, “The family that races together, stays together.” A very credible example of that philosophy is the Matlock family who won two Pro UTV classes in San Felipe as well as finishing close enough that they both ended up together spraying each other with champagne while standing on top of their Polaris vehicles on the finish line ramp in San Felipe.

In a photo op for the ages, Wayne Matlock won his Pro UTV FI class and his wife Kristen Matlock drove solo as did her husband while she won Pro UTV NA (Normally Aspirated) to take the class point lead in her No. 1954 Polaris RZR XP 1000 earning 78 season points.

International motorcycle rally racer Santiago Creel, 31 of Mexico City, was rider of record on four KTM motorcycles, an all-time SCORE record for a single race. Using a host of talented teammates from Italy, Mexico and the U.S.A., Creel won both the Pro Moto 30 and the Pro Moto Limited classes in San Felipe to lead the points in each after one race.

Creel, in just his sophomore season racing with SCORE (he was the Pro Moto Limited class point champion in 2017), also finish second and third in the Pro Moto Unlimited class.

The 2018 Sportsman motorcycle point leader is the team led by Alvaro Bello, Spring Valley, Calif. (SPT M/C, Kawasaki KXF450) who has 90 season points so far. Leading the Sportsman Quad division after his San Felipe win with 77 points is the team led by Danny Magdalena, Acton, Calif., on the No. 115a Honda TRX450R.