SCORE TROPHY TRUCK
BRYCE MENZIES, No. 7 (Menzies qualified first.) – – “It was honestly the gnarliest qualifying course I’ve ever done, as far as pushing the limits and if you do, there are massive cliffs and rocks. I thought it was awesome. It’s cool that we get to show our driving abilities. When you put on a qualifying course like this, if you make one mistake, you are either crashing or getting a flat. So we played it smart and tried not to make any mistakes. At the end I tried to jump a corner at the finish, and clipped a rock and now we have a flat. Man, that was wild. I had a good time.”

LUKE McMILLIN, No. 1 (McMillin qualified second.) – – “It went really well; I’m super excited. Qualifying is nerve-wracking.  We didn’t do anything crazy, but we are out here pushing the limits in these trucks.  This is my second time racing this truck, first time qualifying it.  I think we are in the top three, top five, hopefully, It was a driver’s course, which I like. You had to think, you had to drive, you had to read the terrain and that was really fun.  The real race starts on Saturday though, and we have our eyes on the prize – the SCORE Baja 1000.”

ROBBY GORDON, No. 77 (Gordon qualified third.) – – “Max told me to make a sharp right, but I overdrove the corner anyways, missed a gear, so I probably gave up a couple seconds there. I missed three corners that Max called, but I was pushing, going for a little more. Otherwise, the truck runs good.”

ROB MAC CACHREN, No. 11 (Mac Cachren qualified fifth.) – –  “I think it went pretty well.  I’m happy to hear our time was pretty good.  A very difficult, technical track and we pushed it hard but didn’t want to tear the truck up. We didn’t want to make a mistake.  I’m sure we made little ones, there are so many blind corners and hills so it’s easy to blow a corner, but we had a pretty smooth run. I definitely want to be in the top ten.”

DAN MCMILLIN, No. 23 (McMillin qualified sixth.) – – “We kept it on the course, the most important part.  It was rocky out there, but we got the right tires for the job – BFGoodrich tires. It was a tough qualifier and easy to make a mistake, but we didn’t make any, we did good. With all-wheel drive, that helps.”

JAX REDLINE, No. 22 (Redline qualified seventh.) – – “Compared to previous qualifying courses, I was looking forward to this one, because it’s a little more technical, with my two-wheel drive truck. I felt really good, I was spinning the tires like crazy, trying to not fall off a cliff,  trying to not roll the truck, but overall, it felt really good. I can’t wait to see where we qualified.”

RICKY JOHNSON, No. 12  (DOR Gustavo Vildosola qualified eighth.) – – “This is my first time driving this all-wheel drive truck for Vildosola Racing.  I want to thank the team and Gustavo.  A lot to learn but it was clean and we didn’t take any chances. I’m hoping for a top five in qualifying. I have the most experience with these all-wheel drives, so I feel good about it.  I toned it down a little and tried to be smooth.  With 1,000 HP, it’s a lot to hold onto.”

ALAN AMPUDIA, No. 10 (Ampudia qualified ninth.) – – “It went well. On the practice lap, I wasn’t feeling confident, but once we went green, we went for it. My brother called all the notes perfectly. I think we got a top ten. They are making us work for this one. We are going to give those all-wheel drives a run for their money.”

APDALY LOPEZ, No. 9 (Lopez qualified tenth.) – – “We didn’t make a mistake. I’m hoping for a top ten. The course was really technical and I like that.  It was a rocky course but our tires were good.”

TAVO VILDOSOLA, No. 21 (Vildosola qualified eleventh.) – – “This course is almost impossible to have a completely clean run; a lot of rocks, a lot of ups and downs and trees. We tried to mind our P’s and Q’s.  We tried to be as smooth and precise as possible. We just had a few little mistakes.  Hopefully we are in the top ten and look forward to competing on Saturday.”

MADIX BAILEY, No. 29 (Bailey qualified twelfth.) – – “That was probably the best qualifying run I’ve ever done in the desert. I think we did a stellar job running the course. The course was tight and technical. This is my first SCORE race and I’m stoked to be here racing with these guys.  We want to do the SCORE Baja 1000.”

LARRY ROESELER, No. 43 (Roeseler qualified 13th.) – – “It’s always hard to speculate how we will end up in qualifying. There are a lot of really good drivers out here. Track was good, the truck was good, the suspension was good.  We didn’t push too hard, but hopefully we get to start somewhere near the front. The course was awesome, technical, a really good off-road course. Excellent. Like what we race on.”

RYAN ARCIERO, No. 16 (DOR – Cameron Steele qualified 14th.) – – Said Arciero, “I tell you what – that was a tough qualifying course. Those boys at SCORE pushed us on this one. Almost every corner you could make a big mistake. There were huge rocks and you don’t want to get a flat.  It’s a five-mile course so if you get a flat early on, you are done. For us, it was to keep our nose clean, get ourselves around, make sure we have a good truck for the race. Wherever qualifying falls, it falls. We are ready for the race on Saturday.”

PAT DEAN, No. 19 (DOR – Tim Herbst qualified 15th.) – – Said Dean, “We had a pretty good run, but we made a couple of mistakes and had to back up twice. With this kind of competition, that is not good.”

BOBBY PECOY, No. 14 (Pecoy qualified 16th.) – – “Whew! That was a good time! That was a fire-breathing dragon. This truck is amazing to drive. I love driving this truck. Qualifying is probably my favorite part of the whole race.  We have these BFGoodrich tires that hook up where we need it to hook up. We gave up some spots, so we will see where we finish.”

AJ JONES, No. 79 (Jones qualified 18th.) – – “It was a really technical course, there are a couple tricky areas. I made a big mistake that cost us a bunch of time, but we got it around and nothing is broken, so we are happy about that.”

DAVE TAYLOR, No. 26 (Taylor qualified 20th.) – – “Super difficult, off-camber corners.  We tried to keep our mistakes to a minimum.  We were trying to go easy and stay on top of the rocks.”  Said co-driver Sara Price, “I’m excited to be back in Baja with Dave. He did an amazing qualifying run. We just have to be smart. We aren’t starting in the back, but we didn’t need to be first either. We are in a good position; I’m looking forward to the race on Saturday.”

ANDY MCMILLIN, No. 31 (McMillin qualified 24th.) – – “The course was awesome. I loved the qualifying course. Unfortunately I loved it too much and was sliding around and hit a rock and then got a flat. So we had to stop and change it. Not our best effort, but we will be in the race this Saturday and we are going to give it our all.”

JUSTIN LOFTON, No. 41 (Lofton qualified 25th.) – – “Unfortunately we ended up with a flat tire about three-quarters of the way through. Before that we were on the ball and hitting our marks. The truck is comfortable and I really like driving it. There must have been a rock in a silt bed that we didn’t see. We hustled and changed the flat, but it’s not the results we wanted. I’m looking forward to the race on Saturday.” 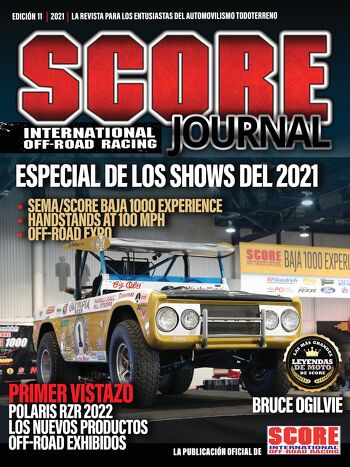