Much, much more than just a race, history shines brightly on next month’s 50th BFGoodrich Tires SCORE Baja 1000 – SCORE-International.com 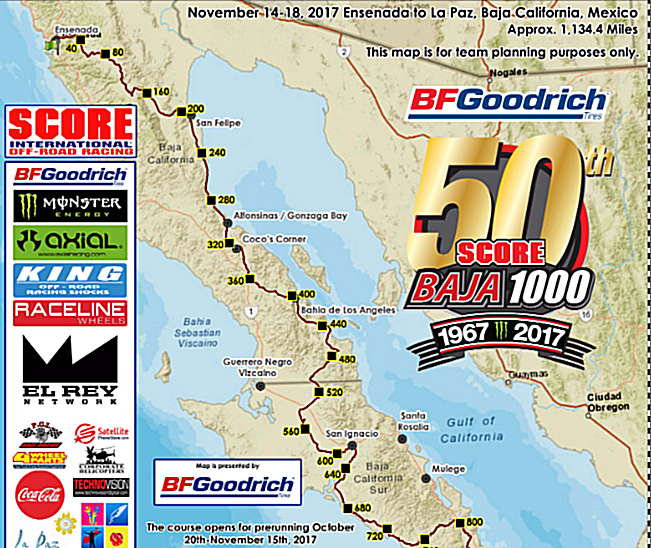 Much, much more than just a race, history shines brightly on next month’s 50th BFGoodrich Tires SCORE Baja 1000

Much, much more than just a race, history shines brightly

ENSENADA, Mexico— As the World Series is to baseball, the Super Bowl to football and the World Cup to soccer, the legendary SCORE Baja 1000 continues to stand as tall at the pinnacle of the motorsports world today as it did when it began 50 years ago. It is aptly referred to as the Granddaddy of All Desert Races.

This year’s historic 50th golden anniversary race, sponsored for the first time by BFGoodrich Tires, will be held Nov. 12-18. It will start in the heart of Ensenada, Baja California, Mexico covering much of the majestic Baja California peninsula. It will finish in La Paz, Baja California Sur. It will be the 50th anniversary of the race shrouded in mystery that continues to lure the world’s best racers and adventurers from around the globe who all continue to share the dream to conquer the Baja.

Racer registration continues at www.score-international.com for the iconic race. The race is the season-finale of the four-race 2017 SCORE World Desert Championship

It’s the oldest and most well known of all desert races, and it remains as the single most appealing accomplishment to a driver. Since 1967, the mother of all desert races has been run over the mysterious, majestic Baja California peninsula every year except 1974 when an international fuel crisis forced a cancellation.

The first known record run occurred in 1962. Dave Ekins and Bill Robertson Jr. timed their trip from Tijuana to La Paz on a pair of Honda 250 motorcycles. Ekins made it in 39 hours, 54 minutes, Robertson in less than an hour slower. There were no official timers, of course, and to establish that they had made the trip, the two motorcycle racers time-stamped a sheet of paper in the Tijuana telegraph office and time-stamped it again at the telegraph office when they arrived in La Paz. They began their journey at midnight in Tijuana.

Capitalizing on the pioneer effort of Ekins and Robertson, Chevrolet commissioned car builder Bill Stroppe to prepare a small fleet of trucks for the run to La Paz. Late that year they left Long Beach, Calif., and all of them reached La Paz. Advertising and publicity campaigns heralded the feat as “the roughest run under the sun.”

For the last two years, readers of USA Today newspaper have voted the SCORE Baja 1000 as the No. 1 motorsports event in the world.

“Without the SCORE Baja 1000, there just wouldn’t be any desert racing,” said Roger Norman, SCORE International’s President and CEO. “The SCORE Baja 1000 continues to draw interest from all over the world and we now find second, third and even fourth generation racers appearing at the starting line with their family patriarchs cheering for their off-spring. This event continues to be the focal point of the SCORE World Desert Championship each year the celebration of our 50th anniversary will surely add another colorful chapter to the golden legacy of the SCORE Baja 1000.”

Enthusiast Ed Pearlman founded the National Off Road Racing Association (NORRA) and established the Mexican 1000. It started officially in Tijuana on October 31, 1967 with 68 entries. They actually motored at leisure speeds to Ensenada and restarted the next day.

NORRA continued to organize the Mexican 1000, which came to be known as the Baja 1000. In 1968, Pearlman moved the start of the race to Ensenada, where it stayed with one exception until 1993. In 1972 NORRA started at Mexicali and ran the first half of the race down the east coast of the peninsula through the treacherous Three Sisters section. Pre-running for this race, Parnelli Jones and Walker Evans were among a group of competitors who nearly got swept out to sea during a tropical storm.

NORRA’s last race was in 1972. At that point, Mexican officials revoked NORRA’s permits to stage races in Baja. In 1973, a domestic group called the Baja Sports Committee produced the race.

After the fuel crisis of 1974 forced local officials to cancel the event, SCORE International, founded by the late Mickey Thompson and headed soon after by Sal Fish (until 2012), was invited by the northern state of Baja California to hold the race in 1975. The SCORE Baja 1000 became a loop event starting and ending in Ensenada. Roger Norman purchased SCORE International from Fish on Dec. 20, 2012.

In 1979, the government of Baja California Sur granted permission to resume the Ensenada-to-La Paz format and SCORE has used this route intermittently ever since.

The 1979 race was notable for Walker Evans’ overall win in a Dodge truck, the first truck to win the overall title of the race.

This year’s race will commemorate the achievements of legendary desert racers like Rod Hall, Ron Bishop, Johnny Johnson, and Larry Roeseler. Hall, who will turn 80 on Nov. 22, has a record 24 class wins (including one overall win in 1969), and is the only racer who has competed in all 49 SCORE Baja 1000 races. Bishop was the only racer who competed in the first 40 SCORE Baja 1000 races all on a motorcycle.

Hall will be racing this year in the Stock Full class with his son Chad Hall as he attempts to add to his untouchable legacy.

Bishop, now deceased, was the only racer who competed every year of the first 40 on a motorcycle. Johnson, now retired, had 15 class wins, amazingly in eight different classes.

Roeseler, has won 17 times in this race, including 13 overall wins (10 on a motorcycle). Roeseler will share driving duties this year in SCORE Trophy Truck with Luke McMillin in the No. 83 Ford F-150. Roeseler won the unlimited Class 1 for four consecutive years (2004-2007), driving with the youngest of three racing brothers, Troy Herbst, in the Smithbuilt-Ford open-wheel desert race car that was known as the ‘Land Shark’. Roeseler is the only racer in the history of the event to win the overall 4-wheel in a truck and also in a car as well as the overall 2-wheel title as well.

In 2008, Roeseler split the driving with driver of record and team owner and now SCORE owner Roger Norman when they were the overall 4-wheel and SCORE Trophy Truck champions and the pair was second in 2009. In 2010, Roger Norman drove solo the length of the peninsula and finished third overall.

Special history was also made in 2010 when the father/son team of Gustavo Vildosola Sr and Gustavo ‘Tavo’ Vildosola Jr, of Mexicali, drove to the overall 4-wheel and SCORE Trophy Truck victory to become the first Mexican nationals’ team to win the legendary race and it was a peninsula run from Ensenada to La Paz.

Lured by the same siren that enraptured the Ekins brothers in the 1950s, the SCORE Baja 1000 remains as the No. 1 target of adventurers the world over, not to mention the cadre of pro and semi-pro desert racers who consider it the fitting climax to their racing season each year.

To date, there are 206 total entries from 34 U.S. States, two U.S. Territories and 19 countries officially signed up to compete. In addition to the United States, the U.S. Territories of Guam and Puerto Rico and the host country Mexico, the other countries with racers entered are Australia, Austria, Canada, Chile, Costa Rica, England, Finland, France, Germany, India, Israel, Italy, Japan, New Zealand, Peru, South Africa and Spain.

From award-winning documentary filmmaker Brown, ‘Dust 2 Glory,’ scheduled to premiere nationwide on Dec. 6, chronicled each of the four races in the 2016 SCORE World Desert Championship. Brown’s original Dusty to Glory, released in 2005, became an iconic classic showcasing the legendary SCORE Baja 1000. D2G, which began shooting at the 2015 SCORE Baja 1000, continued up close and personal coverage capturing the robust racers in their amazing adventures in Mexico’s majestic Baja California peninsula through all four spectacular 2016 races. Executive Producer is BCII’s Bud Brutsman.

Tickets for the special, one-night Dec. 6 nationwide premiere will go on sale on Oct. 23. For information regarding tickets and theater locations, visit https://www.fathomevents.com/events/dust-2-glory.

Miles of Baja and complete the First Non Assisted Ride.

From Tijuana to La Paz

1990 – Bob Gordon wins the overall 4-wheel with his daughter Robyn and son Robby, marking the

him four wins in five years in the marquee racing division

2004 – Larry Roeseler becomes only the second person in race history to win the overall on both 2-wheel and 4-wheel, earning the 4-wheel title with Troy Herbst. Roeseler has a record 13 overall wins in this race, 10 in 2-wheel and three in 4-wheel

-Roger Norman takes over ownership of SCORE on Dec. 20

Jason Voss, wins again in 2015 with Andy McMillin and a third straight in 2016 with Jason

returns to the top of the podium, breaking the record 17 straight 2-wheel wins by Honda

The longest SCORE Baja 1000 from Ensenada to La Paz was in 2014. The 2017 course is 1,134.40 miles, making it the second longest in event history for races starting in Ensenada and finishing in La Paz.

Here is the mileage breakdown for all 22 previous peninsula runs.