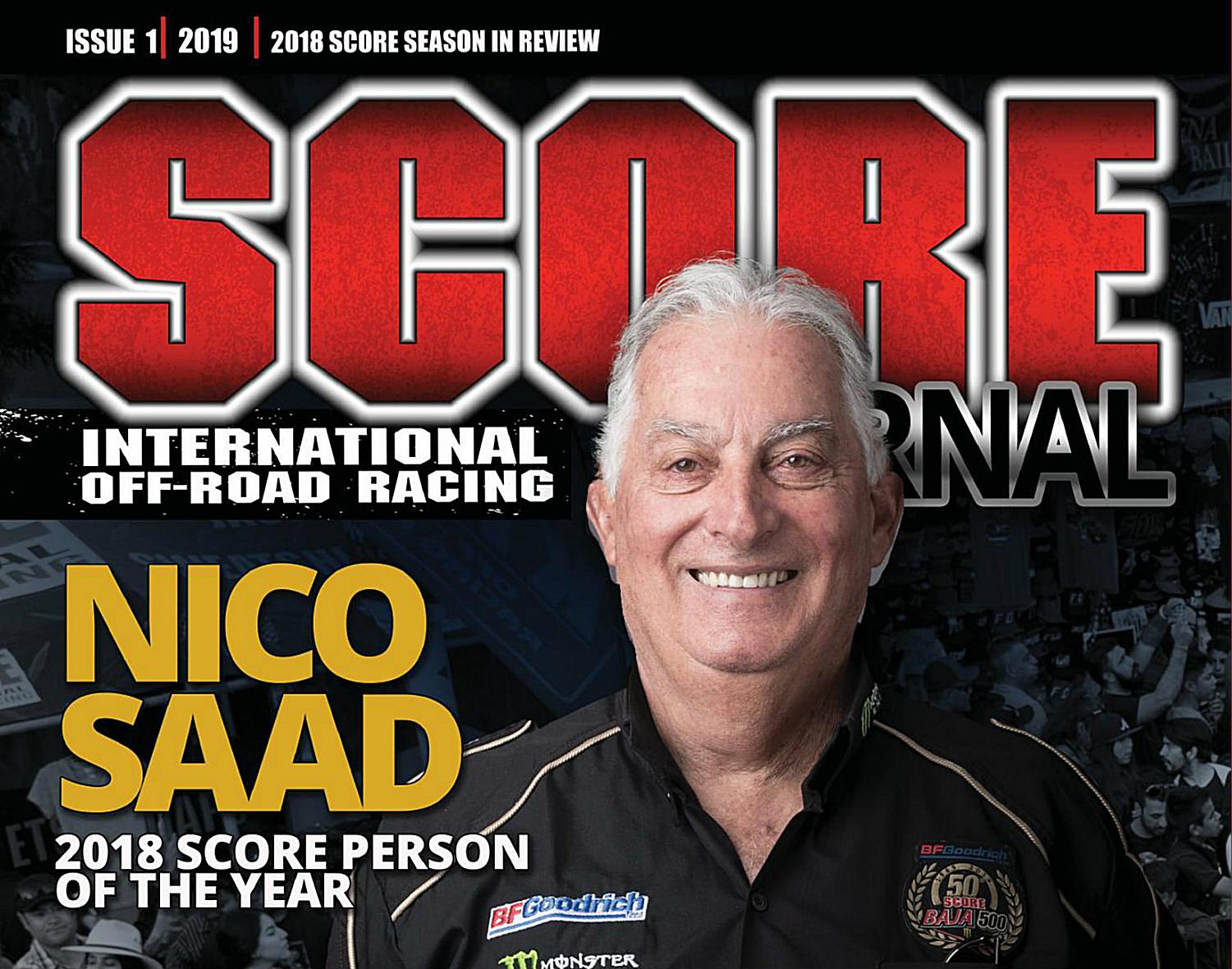 Promoting off-road racing on behalf of SCORE International, Saad continues to work diligently behind the scenes

Photos by Jack Wright and Get Some Photo In consideration of his tireless work behind the scenes to promote and keep Baja racing alive in and around his native Ensenada, Nico Saad was named 2018 SCORE Person Of The Year. To achieve success with events as large and complex as SCORE desert races, tangible positive benefits for everyone concerned are a necessity, and according to SCORE Marketing and Sales Manager Jim Ryan, Nico Saad has been a shining star. “His vision and negotiating skills have allowed him to coordinate the myriad of government, business, and private entities that are needed to put the races together with positive impacts for the local economy and citizens,” said Ryan. “He was instrumental in the development and execution of getting the initial Baja 500 to take place.”

Nico Saad is the owner of the San Nicolas Resort in Ensenada which, like the Baja 500, celebrated its 50th Anniversary in 2018. “Saad has been honorably humble, unusually unassuming, and famously friendly by nature, while constantly and consistently working behind the scenes by choice on behalf of SCORE Baja racing for 45 years,”said Ryan. “An unsung hero of SCORE Baja racing, a champion of all desert racing, and a keen businessman who has helped SCORE dot all the ‘I’s and cross all the ‘t’s, Saad has been pulling all the necessary strings over four and a half decades to ensure SCORE’s preeminent place in Baja California for all these glorious years.” Former SCORE owner Sal Fish has said, “Nico Saad is one of just a handful of men that you can truly say is part of that unique and exclusive league of extraordinary gentlemen. What he did for SCORE at the beginning to get started, and has continued every year since, cannot be measured any other way but to say honestly that SCORE’s history in Baja California would have been short-lived without his involvement.”

Saad is the proud recipient of numerous awards and accolades over the years for his work in support of both Baja racing and tourism, including being inducted as an Industry Pioneer to the Off-Road Motorsports Hall of Fame in 2008. SCORE’s Person of the Year Award further recognizes his instrumental role in the success of off-road racing in Baja since 1973.

Nico Saad’s parents emigrated from their native Lebanon in 1925, first to the U.S., then on to Baja California, where Nico was born in 1939. His father eventually opened the Hotel San Nicholas in Ensenada, and the family then expanded their businesses to include car and tractor dealerships, a department store, and cattle ranches. Nico attained a business degree in college and used his knowledge to assist in further expanding the family’s commercial success. As a young man during the late 1950’s and early 1960’s, he also took up barefoot water skiing, and became such a proficient world-class skier that he was touring with ski shows, boat shows, and even the World Water Ski Championships.

This new notoriety helped make him a local celebrity in Ensenada, and allowed him to further boost the area’s tourism industry. City officials approached him to meet with off-road racing promoters to help bring the sport to the city, and he was successful in bringing those first races to Ensenada. By 1971, however, relations had soured between race organizers and local people. Poorly marked courses and disregard for rules led to racers causing damage and losses to private farmlands and ranches. This led to the competitions being moved away to the Mexicali area. Saad, however, realized the importance of the racing to Ensenada’s tourism trade and overall economy, and two years later his efforts led to his meeting with the President and the return of the Baja race to his home community.

Since that time, he has worked tirelessly to keep smooth, positive relations between all the parties involved with the races. Of that long time period, Saad says, “We’ve had many ups and downs, but I was always in the back seat trying to help negotiate meetings and improving the relationship between SCORE and the people and government in Ensenada. Over the years, we’ve made contracts with farmers, respected their property, and set up great working conditions that have survived all these years. With the 50th anniversary of the SCORE Baja 500, I’m happy to see these relationships continue and I’m very proud of what has been done.” Nico Saad has been instrumental in all these years of tourism development and commercial success for both SCORE and Ensenada area businesses and people. Each year, new issues and concerns crop up but with Nico continuing to be there every step of the way to help iron out the rough spots, the future is bright for SCORE’s Baja races and the citizens of Baja California.

Congratulations to Nico Saad, SCORE’s Person of the Year.