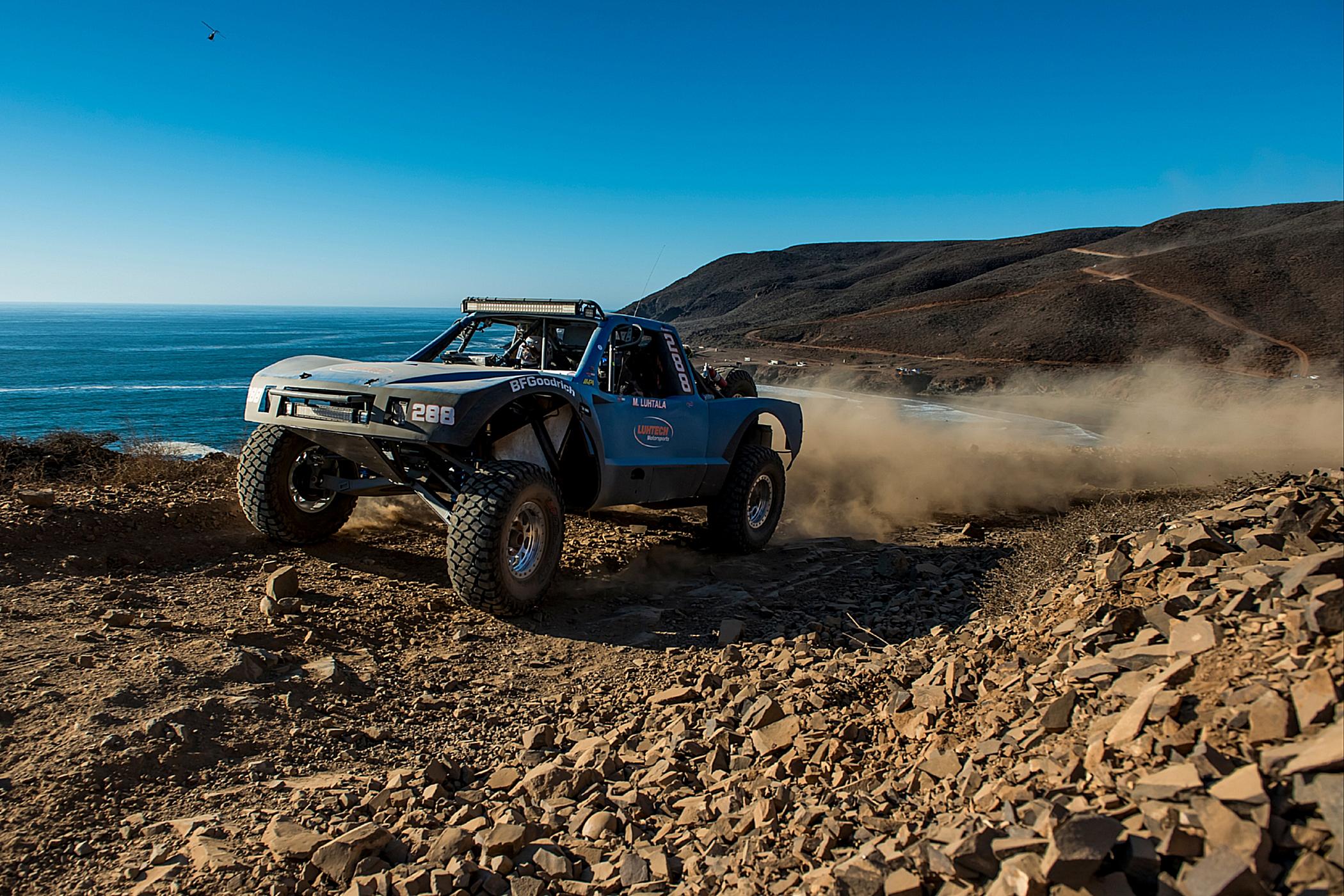 ENSENADA, Mexico—Desert racing is the original extreme sport and racers from around the world begin pre-running on Friday for next month’s 50th annual BFGoodrich Tires SCORE Baja 1000, the iconic Granddaddy of All Desert Races that started it all. Drivers and riders will begin practicing for their golden quest to beat the Baja in the ultimate test of men, women and machines.

Practice officially starts at 8 a.m. (PT) on Friday from Ojos Negros all the way down the Mexico’s magnificent Baja California peninsula to La Paz. The race course has been marked and GPS information has been prepared for the challenging 1,134-mile journey.

Registration continues at www.score-international.com for the legendary competition. The event and race-week festivities will be held Nov. 12-18 in Baja California, Mexico.

As it has for over four decades, SCORE has put together another memorable race course for the 50th anniversary, this one is a point-to-point race, with all of the foreboding, unforgiving terrain that both the northern state and southern state of the majestic Baja California peninsula has to offer. SCORE CEO/president Roger Norman and SCORE Race Director Jose A. Grijalva have designed and finalized this year’s race course of 1,134.40 miles. Plans call for the course to have five physical checkpoints along the way to the finish.

From San Matias to San Felipe and the Sea of Cortez over a new trail that will start at Morellia Junction all the way to Zoo Road while skipping the infamous bad whoops.

The five checkpoints will be located at Coco’s Corner, Mujica Baja Sur, near Loreto, road crossing at the Lopez Mateos Highway and at Loma Amarilla.

Larry Roeseler has 17 class wins in the SCORE Baja 1000, including a race-record 13 overall wins (10 on a motorcycle, two in a desert race car and one in a SCORE Trophy Truck). This year he will be the second driver for third-generation desert racer Luke McMillin in the No. 83 Ford F-150 in SCORE Trophy Truck.

Among the other early entries is legendary veteran Rod Hall who is the only person who has raced in all 49 SCORE Baja 1000 races. Turning 80 on Nov. 22, Hall has a race-record 24 class wins (including the overall in 1969) and will be competing again this year in Stock Full with his oldest son Chad Hall as his principal additional driver. Hall and his team will again drive the No. 8101 Hall Racing Hummer H1 Alpha.

Including SCORE Trophy Truck, seven total classes already have double figures in terms of entries so far. While several other classes have nearly reached at least 10 entries, the other classes with double figure entries to date are: Pro UTV FI (15), unlimited Class 1 (14), Class 10 (14), Trophy Truck Spec (12), Pro Moto Ironman (12) and leading the Sportsman classes is SPT M/C with 19 entries so far.

Obviously with a lot of help from his riding buddies, Santiago Creel, an international motorcycle rally racer from Mexico City is helping celebrate the golden anniversary of this legendary race by entering four KTM motorcycles in three different classes. Creel, 31, is rider of record for Pro motorcycle entries in Pro Moto Unlimited, two in Pro Moto Limited and another in Pro Moto 30 for riders over 30 years old.

By SCORE rules, a driver/rider of record must either start or finish the race in order to receive points for the entry. With the exception of the Pro Moto Ironman class, which is for solo riders, almost all entries will have two, three or more drivers/riders to challenge the Baja peninsula for this event.

Jumpstarting the festivities for the 50th BFGoodrich Tires SCORE Baja 1000 for the fourth straight year will be the massive SEMA SCORE Baja 1000 Experience at the Las Vegas Convention Center (Oct. 30-Nov. 3) during the SEMA Show and the special SCORE Baja 1000 qualifying for the first 40 SCORE Trophy Trucks that enter the anniversary event.

With both events presented by BFGoodrich Tires, qualifying will be held at the Off-Road Track at Las Vegas Motor Speedway (6 p.m. PT, Tuesday, Oct. 31).

At 7 p.m. (PT) on Wednesday, Nov. 1 there will also be a VIP screening of the ‘Dust 2 Glory’ documentary movie on the SCORE World Desert Championship. The screening will be open to all individuals with a SEMA Show badge.

For all the classes except SCORE Trophy Truck, the drawing for starting positions within each class will be held on Wednesday, Nov. 1.  Entries must be received by 11 p.m. (PT) on Friday Oct. 27 to be included in the start draw. Late entries received after the drawing will be placed by class in the next available starting position following those that entered in time for the random draw.