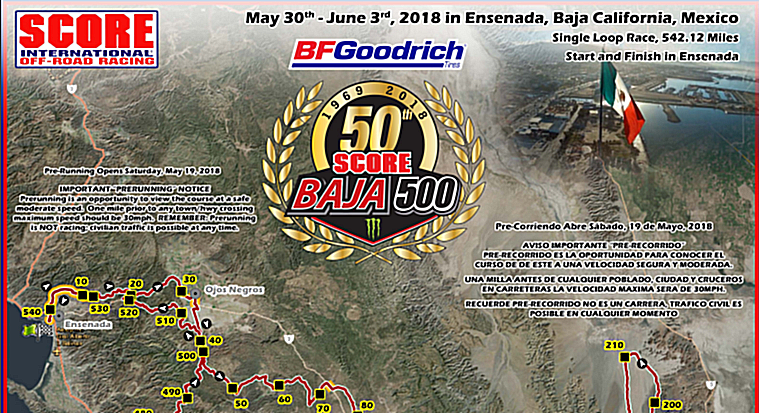 ENSENADA, Baja California, Mexico—In its continuing quest to bring quality, safe and memorable events to the motorsports world, a race-record course of 542.12 miles has been announced by SCORE International for the upcoming golden anniversary of the legendary BFGoodrich Tires SCORE Baja 500.

Round 2 of the four-race 2018 SCORE World Desert Championship will be held May 29-June 3. The celebratory internationally-televised race will start and finish in Ensenada, Baja California, Mexico, the seaside port on the Pacific Ocean, 80 miles south of San Diego.

To accommodate the much longer race course, SCORE has increased the time limit to be an official finisher and SCORE has also pushed back the start times on Saturday, June 2.

Reflecting on the course, Grijalva commented, “This is going to be the roughest, toughest, longest and most spectacular SCORE Baja 500 race course in its 50 years of existence without exception. Reflecting Roger’s desire to have at least 500 miles on dirt we have a final course of 542.12 miles to ensure that and we extended the time limit to 22 hours as well as starting the two groups two hours earlier on June 2.”

“Because of the difficulty of this course, we are now requiring all Sportsman classes and Class 11 to miss a brutally-tough section of the route near La Ventana on the north side of Highway 3. This will reduce the total distance for those classes to approximately 473 miles while keeping the time limit for those classes at 22 hours.”

“For safety reasons all Sportsman entries and Pro Moto and Pro quad vehicles reaching a checkpoint after its closing time will be stopped and removed from the race as non-finishers.”

“After going up to Mike’s Sky Rancho and back around Rancho Meling, several new trails will be used to get over to the Pacific Coast near Vicente Guerrero.”

The official 542.12-mile course map is now available on the SCORE website at the following link…http://score-international.com/raceinfo/2018-baja-500-course-map/.

Official practice, or pre-running, on the official race course for this year’s BFGoodrich Tires SCORE Baja 500 will begin next Saturday, May 19. Pre-running will start near race mile 38 and that section from the start to race mile 38 may only be run outbound on Thursday and Friday of race-week. For safety reasons new trails will be used for the race course in the Ojos Negros area.

It is an elapsed-time race with staggered starts as the green flag on Saturday (June 3) will drop first for the motorcycles and quads at 3:30 a.m. (PDT) and approximately 8 a.m. (PDT) for the cars, trucks and UTVs. While the fastest vehicles are expected to finish in around 11 hours, all vehicles will have a 22-hour time limit from the time each starts to become an official finisher.

The total of 140 entries to date have come from 23 States in the U.S.A., U.S. Territory-Puerto Rico along with host country Mexico, Argentina, Canada, Italy, Japan and New Zealand.

Leading the early entries is the marquee SCORE Trophy Truck division for high-tech, 950-horsepower, unlimited custom trucks with 24 official entries as of today.

Other classes with double-figure entries so far are Pro UTV FI (Forced Induction) with 19, Trophy Truck Spec with 11 and Class 10 with 10 entries.

No new entries will be accepted after 8 p.m. PDT on Wednesday, May 23. Late, on-site racer registration will be held on Wednesday, Thursday andFriday (May 29-30, June 1).