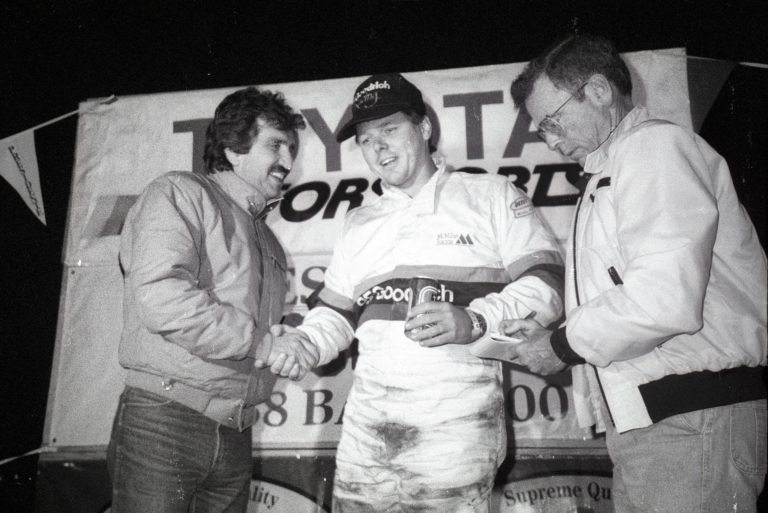 SCORE is remembering one of its own, former long-time SCORE PR director Deke Houlgate, who passed away at 91 at his home in Carlsbad, Calif. on Dec. 26.

Working as a professional consultant for SCORE from its beginning in 1973 until the 1994 season-opening SCORE Parker 400, Deke was a West Coast sports publicist whose clients included the Riverside International Raceway, and such auto racing legends as Mario Andretti, Rick Mears, Richard Petty and Johnny Rutherford.

“Deke was a hard task-master, but he was a consummate professional and taught me a lot about motorsports as well as working with the media, event promoters, racers and teams,” commented Dominic Clark, SCORE Media Operations Director who started working with Deke in 1982 and continues in that position today. “Deke and Olga (Deke’s wife) were a solid team in the early days of SCORE and helped Mickey Thompson and Sal Fish set the course for the World’s Foremost Desert Racing Organization.”

Deke began his career in sports after graduating from the University of Southern California in 1954. He started as a copy boy in the sports department at the Los Angeles Times, and later worked as a general assignment reporter and assistant director of special events at the newspaper. He also worked as a reporter at the Las Vegas Sun and Los Angeles Herald-Examiner.

In 1962, Houlgate opened his own public relations firm, Houlgate and Associates. He handled PR for the old Riverside International Raceway and the early years of the Virginia Slims women’s pro tennis tour in Los Angeles. He also worked for automotive designer and driver Carroll Shelby.

Houlgate is survived by Olga, his wife of 66 years, and three sons, John, David and Greg. He was preceded in death by his oldest son, Deke III.

Services are pending, but the SCORE family is indebted to Deke for the contributions he made him helping to put SCORE in a prominent worldwide spotlight.