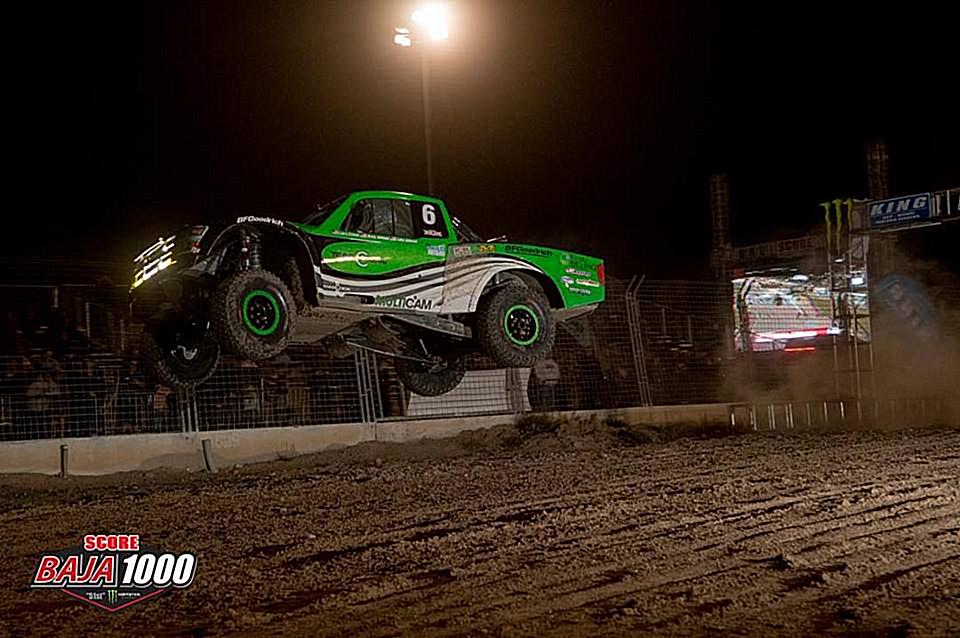 The special SCORE Baja 1000 Qualifying, presented by BFGoodrich Tires was held on a purpose built, very technical .6-mile course that started and finished on the Off-Road Track at the Las Vegas Motor Speedway.

The iconic Granddaddy of All Desert Races itself will start and finish in Ensenada, Baja California, Mexico. This year’s SCORE Baja 1000 race-week festivities and race will be held Nov. 12-18. The race is the season-finale of the four-race 2018 SCORE World Desert Championship.

In front of an appreciative capacity crowd at the LVMS Off-Road Track on Tuesday night, Johnson, who won 38 Supercross races and seven AMA season championships in his Hall of Fame motorcycle career, blistered the dirt and asphalt covering two laps of the .6-mile course in one minute, 51.92 seconds with an average speed of 38.57 miles per hour in Connor’s No. t Team C Racing Chevy Silverado. He ran laps of 58.69 seconds and 43.23 seconds. His second lap was the fastest of the night.

Johnson was quickest among the 30 trucks out of the 37 entered in the race that elected to participate in the optional qualifying event.

Dana is also presented live streaming of the entire three-hour qualifying event from LVMS on the SCORE website.

The 5,000-pound race trucks are designed for the pounding of open desert racing resulting in average speeds in qualifying 15-20 miles per hour less than they will average during the actual race.

Johnson, driving Connor’s SCORE Trophy Truck, finished 1.14 seconds faster than the runner-up qualifier as all of the top 14 qualifiers finished the course in less than two minutes.

Completing the top 5 qualifier list was Cole Potts, Scottsdale, Ariz. fourth in a time of 1:53.84 in the No. 60 Chevy Silverado and fifth was Las Vegas’ Bryce Menzies with a time of 1:53.97 in his new No. 7 Menzies Motorsports Ford Raptor.

The world’s most iconic, oldest, prestigious and longest continuously held desert race, this year’s SCORE Baja 1000 will be a loop race of 806.76 miles in the northern state of Mexico’s majestic Baja California peninsula. It will start for the 44th time and finish for the 25th time in Ensenada. The race is annually the finale of the four-race SCORE World Desert Championship, which has been held exclusively for the past three years in Baja California. The start/finish line compound will once again be adjacent to the picturesque Bahia de Todos Santos one one side and to the historic Riviera del Pacifico Cultural Center.

To date for November’s 51st SCORE Baja 1000, there are 235 total entries with racers from 36 U.S. States and 18 countries officially signed up to compete. In addition to the United States, the U.S. Territory of Guam and host country Mexico, the other countries with racers entered are Argentina, Australia, Austria, Belgium, Canada, Chile, Costa Rica, England, Finland, France, Germany, Italy, New Zealand, Peru, Spain and Sweden.

(NOTE: Entries that elected not to qualify will have a separate random drawing on Wednesday, Nov. 7, to determine their starting order and they will start after the vehicles that qualified in their respective classes.  For all of the other classes, the start order will be determined by finishing results from the SCORE Desert Challenge and a drawing for entries that did not race in Tijuana)