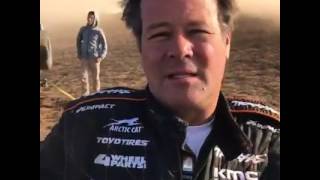 By all accounts, Robby Gordon was literally burning up the course on Friday in the first 150-plus miles of the Baja 1000. After overcoming a brief flat tire, Gordon was back at it until he blew an engine at about mile 200. Before hooking up to the tow strap, Gordon took time to pose for pics with fans while other racers sped by them. Bottom Line: Robby Gordon’s out of the 49th SCORE BAJA 1000 early on . . .